The King of Love My Shepherd Is

The King of love my Shepherd is

1 The King of love my shepherd is,
whose goodness faileth never.
I nothing lack if I am his,
and he is mine forever.


2 Where streams of living water flow,
my ransomed soul he leadeth;
and where the verdant pastures grow,
with food celestial feedeth.


3 Perverse and foolish, oft I strayed,
but yet in love he sought me;
and on his shoulder gently laid,
and home, rejoicing, brought me.


4 In death's dark vale I fear no ill,
with thee, dear Lord, beside me;
thy rod and staff my comfort still,
thy cross before to guide me.


5 Thou spreadst a table in my sight;
thy unction grace bestoweth;
and oh, what transport of delight
from thy pure chalice floweth!


6 And so through all the length of days,
thy goodness faileth never;
Good Shepherd, may I sing thy praise
within thy house forever.

In this hymn, we contemplate the good care that our Good Shepherd gives. Even as we acknowledge that we are often “perverse and foolish,” and obviously do not deserve His kindness, God surrounds us with symbols of His loving care. Truly “thy goodness faileth never.”

Henry Baker, editor-in-chief of Hymns Ancient and Modern, wrote this text based on Psalm 23, and it appeared in the appendix of that hymnal in 1868. The text of this hymn has remained very stable. The fifth stanza is omitted from some hymnals, perhaps because this stanza contains more archaic expressions than any of the others. Most hymnals do not modernize the language. The six stanzas of this hymn correlate closely to the six verses of the twenty-third Psalm, while drawing connections between this well-known Old Testament passage and several New Testament images, all on the theme of the Good Shepherd. In the first two stanzas, the connections are subtle. In stanza 1, Baker adds a comment on the two-way, eternal nature of the relationship between the shepherd and the sheep, referring to Jesus' words in John 10:28. By changing the words “still waters” to “streams of living water,” Baker recalls Jesus' declaration that He is the source of these streams (John 4:14, 7:37-39). Stanza 3 clearly refers to the Parable of the Lost Sheep (Luke 15:3-7). In the second half of the hymn, the connection between Old and New Testaments is more pronounced by the use of the words “cross” (st. 4), “chalice” (st. 5, referring to the cup in the Lord's Supper), and “Good Shepherd” (st. 6).

There are two tunes with which this text is frequently associated: DOMINUS REGIT ME, and ST COLUMBA. DOMINUS REGIT ME is the opening phrase of Psalm 23 in Latin. John B. Dykes wrote this tune for this hymn in 1868. The editors of the English Hymnal were unable to use this tune due to copyright issues, so they adapted ST. COLUMBA, an Irish hymn tune. Both choices are quite popular. DOMINUS REGIT ME appears in more hymnals, but ST. COLUMBA is more popular with arrangers.

Obviously, this hymn can be used for a service based on texts such as Psalm 23 or John 10, or a service with the theme of Christ the Good Shepherd. Paul Westermeyer suggests that this hymn is also appropriate for the Lord's Supper, because of the references in the fifth stanza to “thy pure chalice” on the table set for us by the Lord (Hymnal Companion to Evangelical Lutheran Worship, 332). ST COLUMBA is the more preferred tune of the two for arrangements. This hymn is fairly popular as a theme for organ preludes. “The Lord Is My Shepherd: Six Hymn Settings on Psalm 23” includes organ settings by Wilbur Held of both DOMINUS REGIT ME and ST COLUMBA. Harold Friedell has composed a grander setting, titled “Prelude on St. Columba”. “Good Shepherd, You Are Ever Near” is a choral arrangement by Carolyn Jennings using the tune ST COLUMBA and a slightly altered text. 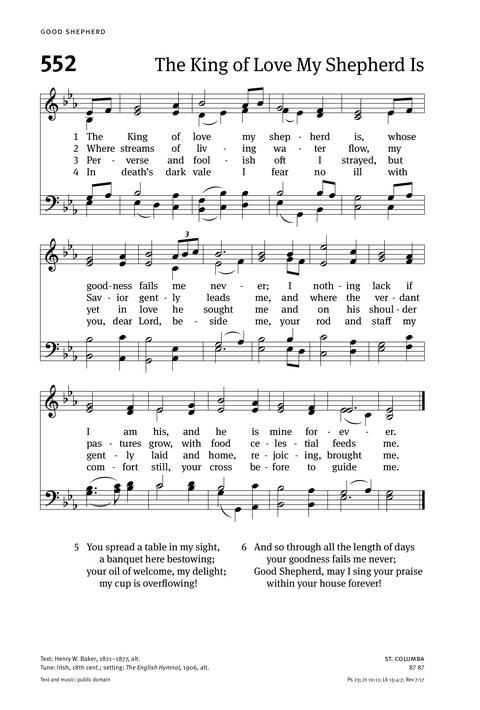 Ancient and Modern #794a

Display Title: The King of love my shepherd is First Line: The King of love my shepherd is Tune Title: DOMINUS REGIT ME Author: Henry Williams Baker (1821-1877) Meter: 87 87 Scripture: Psalm 23 Date: 2013 Subject: Assurance | ; Children and All-Age Worship | ; Comfort and Consolation | ; Death and Bereavement | ; Funerals and The Departed | ; God | Presence of; Proper 19 | Year C; Providence | ; The Fourth Sunday of Easter | Year B; The Fourth Sunday of Lent | Year A; Trust and Confidence |
Ancient and Modern #794a

Ancient and Modern #794b

Display Title: The King of love my shepherd is First Line: The King of love my shepherd is Tune Title: ST COLUMBA Author: Henry Williams Baker (1821-1877) Meter: 87 87 Scripture: Psalm 23 Date: 2013 Subject: Assurance | ; Children and All-Age Worship | ; Comfort and Consolation | ; Death and Bereavement | ; Funerals and The Departed | ; God | Presence of; Proper 19 | Year C; Providence | ; The Fourth Sunday of Easter | Year B; The Fourth Sunday of Lent | Year A; Trust and Confidence |
Ancient and Modern #794b

Great Songs of the Church (Revised) #118

Hymns and Psalms #69a

Hymns and Psalms #69b

Hymns for a Pilgrim People #50

Hymns of the Christian Life #178

Psalms for All Seasons #23D

Psalms for All Seasons #23E

The Hymnal for Worship and Celebration #468

Display Title: The King of Love My Sheherd Is First Line: The King of love my Shepherd is Tune Title: DOMINUS REGIT ME Author: Henry W. Baker Meter: 8.7.8.7. Date: 1986 Subject: Comfort and Encouragement | ; Funeral Hymns | ; Life Everlasting | ; Provision and Leading | ; Testimony and Praise | ; Wedding |
The Hymnal for Worship and Celebration #468

The New English Hymnal #457a

The New English Hymnal #457b

The Song Book of the Salvation Army #53