We Come to Thank You, God, by Singing 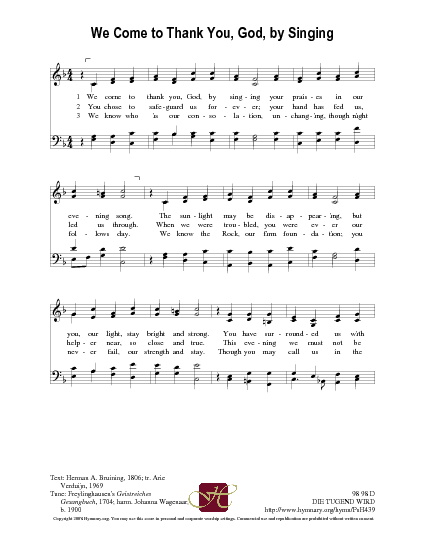 We come to thank you, God, by singing

1 We come to thank you, God, by singing
your praises in our evening song.
The sunlight may be disappearing,
but you, our light, stay bright and strong.
You have surrounded us with favor,
more than a father you have been.
Our source of blessing will not waver;
your mercies, Lord, are clearly seen.


2 You chose to safeguard us forever;
your hand has fed us, led us through.
When we were troubled, you were ever
our helper near, so close and true.
This evening we must not be anxious
our minds and bodies will be blest.
We give you thanks for help so gracious;
from dawn to dawn you never rest.


3 We know who is our consolation,
unchanging, though night follows day.
We know the Rock, our firm foundation;
you never fail, our strength and stay.
Though you may call us in the evening
of lives made weary by our strife,
we rest our hope for brighter morning
on you, Lord of eternal life!

(no biographical information available about Herman A. Bruining.) Go to person page >

Herman A. Bruining (b. Rotterdam, the Netherlands, 1738; d. Veere, the Netherlands, 1811) wrote a five-stanza Dutch evening hymn that began "'k Wil U, O God, mijn dank betalen." It was published in the Dutch hymnal Evangelische Gezangeng (1806). Luther's instructions in his Little Catechism about evening devotions were undoubtedly the inspiration for this text.

Bruining studied at the University of Utrecht, the Netherlands, and became a pastor in the Reformed Church, serving congregations in Kolham, Workum, and Veere. He was widely respected for his theological and biblical studies.

Arie Verduijn (b. Oudshoorn, the Netherlands, 1911; d. Burlington, ON, Canada, 1992) translated Bruining's stanzas 1 and 5 (now st. 1 and 3) into English in 1969 as an expression of "my thanks for all my blessings after God took home my wife, Eeke." It was first sung at an Old Years' service in First Christian Reformed Church, Hamilton, Ontario, on December 31, 1969. He translated stanza 2 in 1986. Following the original Dutch, Verduijn's translation began "I want to thank you, God," but the Psalter Hymnal Revision Committee changed all singular pronouns to plural ones.

An engineer by profession, Verduijn always had a lively interest in church music and served as organist in several churches in the Netherlands. After immigrating to Canada in 1952, he was organist in several Christian Reformed and Presbyterian churches in Ontario. Trained at the Technical College in Leeuwarden, the Netherlands, Verduijn worked at the Philips Company in Eindhoven as well as at other Dutch firms. In Canada he worked as an industrial engineer for the Steel Company of Canada, Hamilton, Ontario (1955-1976). He has published many articles in technical publications as well as a family chronicle and autobiography, Sojourners (1981).

Like many vesper hymns, the text contrasts the fading daylight and approaching darkness with the eternal light of Christ. Stanzas 1 and 2 express gratitude to God for his blessings that come our way during the days of our lives. Stanza 3 turns “evening” into a metaphor for the closing years of earthly life when we may "rest our hope for the brighter morning" on the Lord of eternal life and light.

Liturgical Use:
An evening hymn of thankfulness for God's providence; New Year's Eve services; funerals; as a hymn of gratitude and consolation.

DIE TUGEND WIRD is derived from the more ornamented version found in Johann Freylinghausen's (PHH 34) Geistreiches Gesangbuch (1704), where it was used as a setting for "Die Tugend wird am Kreus geubet." The tune is a rounded bar form (AABA) with harmony suited to part singing. Congregational singin…

All tunes published with 'We Come to Thank You, God, by Singing'^ top