Cyril V. Taylor (b. Wigan, Lancashire, England, 1907; d. Petersfield, England, 1992) was a chorister at Magdalen College School, Oxford, and studied at Christ Church, Oxford, and Westcott House, Cambridge. Ordained a priest in the Church of England in 1932, he served the church as both pastor and musician. His positions included being a producer in the religious broadcasting department of the BBC (1939­1953), chaplain of the Royal School of Church Music (1953-1958), vicar of Cerne Abbas in Dorsetshire (1958-1969), and precentor of Salisbury Cathedral (1969-1975). He contributed twenty hymn tunes to the BBC Hymn Book (1951), which he edited, and other tunes to the Methodist Hymns and Psalms (1983). He also edited 100 Hymns for Today (1969)… Go to person page >
^ top

Lord, You Give the Great Commission

Cyril V. Taylor (PHH 286) composed ABBOT'S LEIGH in May of 1941 when he was working for the Religious Broadcasting Department of the British Broadcasting Corporation (BBC). The BBC had received complaints about the use of AUSTRIA (tune for the Austrian national hymn) during this time of war, a tune then set to "Glorious Things of You Are Spoken" (506). Thus Taylor originally composed his tune for that text. First printed in a leaflet, ABBOT'S LEIGH was published in Hymns Ancient and Modern Revised (1950), Congregational Praise (1951), and the BBC Hymn Book (1951), of which Taylor was editor. No modern hymnal would want to omit this great twentieth-century tune! ABBOT'S LEIGH is named for a village near Bristol, England, where Taylor composed the tune. (Bristol was wartime headquarters for the BBC).

[BBC moved to St. Poul's, Bedford where the tune was composed; Abbot's Leigh was the name of Taylor's parish (Mick Perrier, Hymnary user)]

This dramatic tune with bold melodic gestures and a bar form shape (AAB) is suitable for unison or harmony singing. Use strong accompaniment with a stately tempo.

Text: Lord, We Thank Thee for the Pleasure

Text: Lord, You Give the Great Commission

Text: Through the Darkness of the Ages

Text: Come, Great God of All the Ages

Text: Lord, You Give the Great Commission
^ top 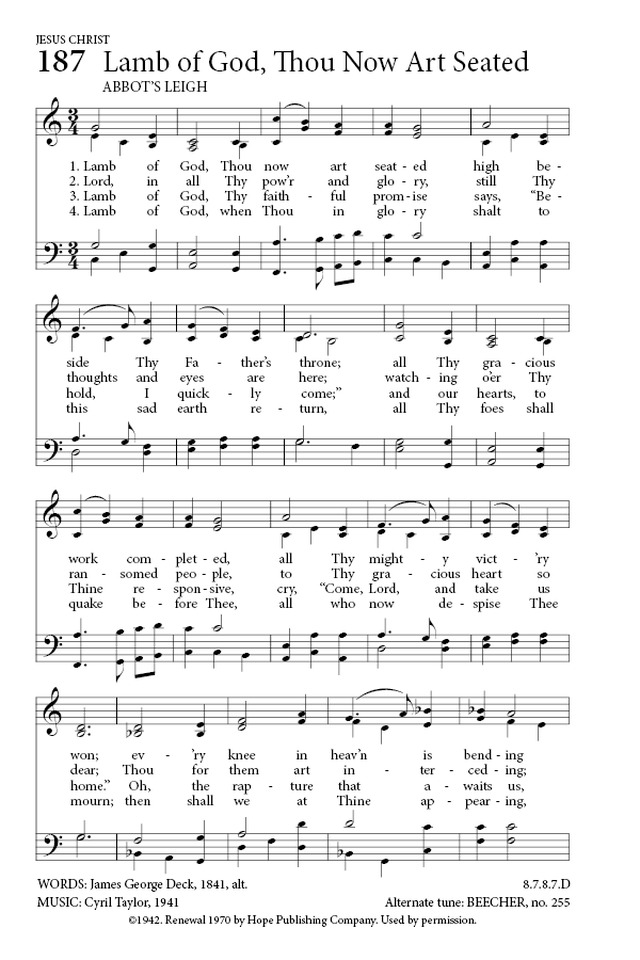 Ancient and Modern #641a

Hymns for a Pilgrim People #486

Hymns for a Pilgrim People #542

Tune Title: ABBOT'S LEIGH First Line: 1 Not for tongues of heaven's angels, not for wisdom to discern, not for faith that masters mountains, for this better gift we yearn: Refrain: May love be ours, may love be ours, O Lord. 2 Love is humble, love is gentle, love is tender, true and kind; l Composer: Cyril Vincent Taylor, 1907-1991 Meter: 87 87 D Key: C Major Date: 2012
Journeysongs (3rd ed.) #715

The Believers Hymn Book with Music #1a

Include 8 pre-1979 instances
All instances^ top
Suggestions or corrections? Contact us