Friedrich Filitz PhD Germany 1804-1876. Born at Arnstadt. Thuringia, he was a German composer and musicologist. He collected church music. He also studied philosophy. In 1833 he worked in Berlin as a music critic and at other employment. He was also a music historian. With Ludwig Erck, he published a collection of 15th & 17th Century chorales in 1845. He moved to Munich and published a chorale book in 1847. His legacy of vauable church music was donated to the Bavarian State Library, where it has made many forgotten works available once again. He died in Bonn, Germany. John Perry Go to person page >
^ top

Three in One, and One in Three,
Ruler of the earth and sea,
Hear us while we lift to Thee
Holy chant and psalm.

Come to our poor nature's night

All texts published with CAPETOWN^ top

CAPETOWN was originally composed by Friedrich Filitz (b. Arnstadt, Thuringia, Germany, 1804; d. Munich, Germany, 1876) as a setting for the text "Morgenglanz der Ewigkeit"; that text and tune were included in Vierstimmiges Choralbuch (1847), a hymnal compiled by Baron Christian von Bunsen and published by Filitz. After earning a doctorate of philosophy, Filitz became active in music editing and publishing in Berlin, where he lived from 1843 to 1847, and in Munich, where he lived from 1848 to 1876. He also published a collection of sixteenth- and seventeenth-century hymns, Vierstimmige Choralsätze ( 1845) .

CAPETOWN was soon published in England; Peter Maurice arranged it for publication in his Choral Harmony (1854) as a setting for Reginald Heber's litany "Lord of Mercy and of Might." CAPETOWN is presumably named after the legislative capital of South Africa. It is a simple but elegant tune in an unusual meter. Sing stanzas 1 through 4 in parts, reserving stanza 5 for a stately unison finale with an additional bright stop on the organ. This tune needs to move on a half-note pulse and slightly slower on stanza 5.

Text: Three in One, and One in Three

Text: If I Speak a Foreign Tongue
^ top 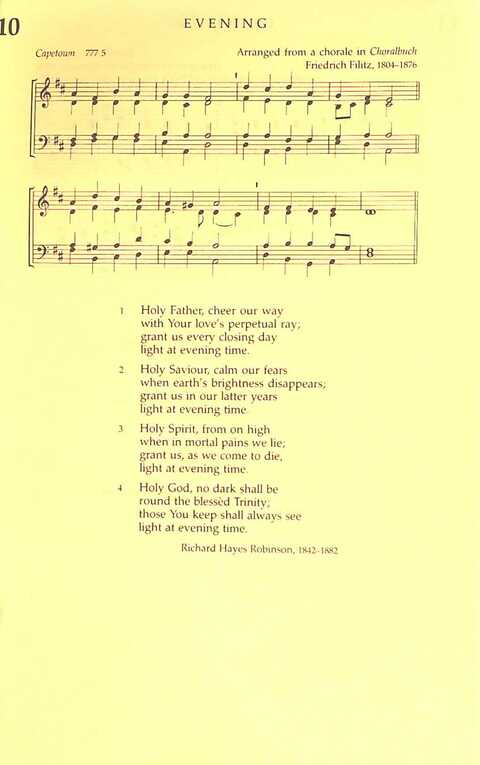 The Irish Presbyterian Hymbook #463b

The New English Hymnal #367a