Johann George Ebeling Germany 1637-1676. Born at Luneburg, Germany, he studied theology at the University of Helmstedt. He was a composer, author, editor, and collector of music. In 1660 he became head of the Hamburg Collegium, and in 1662 cantor of St. Nicholas Church in Berlin. In 1667 he begam teaching music and Greek in Stettin. He wrote choruses, chorales, cantatas, instrumentals oratorios, requiems and music for over 100 lyrics of Paul Gerhardt. He also wrote about music history. 278 works. He died in Stettin. John Perry Go to person page >
^ top

Lift up your hearts Ye people

O God, the Rock of Ages

Johann G. Ebeling (b. Lüneburg, Germany, 1637; d. Stettin, Pomerania, Germany, 1676) originally composed DU MEINE SEELE SINGE for the text "Merkt auf, merkt Himmel, Erde" by Paul Gerhardt (PHH 331). A promising student of both music and theology, Ebeling succeeded the famous Johann Cruger (PHH 42) as cantor at St. Nicholas Church in Berlin at the age of twenty-five. In 1667 he moved to Stettin, where he taught music as well as Greek and poetry in the Caroline Gymnasium (high school). Providing most of the lively melodies and all the harmonizations, Ebeling published two collections of the hymn texts of Paul Gerhardt: Pauli Gerhardi geistliche Andachten (1667) and Evangelischer Lustgarten Herrn Pauli Gerhardts (1669).

This tune was published in the 1667 collection for another Gerhardt text, "Du meine Seele, singe," based on Psalm 146, and from that text the tune got its name. A majestic German chorale in bar form (AABC), DU MEINE SEELE SINGE has an attractive "rocket" motif in the first two lines and a solid climax in the final line. It is well suited to part singing, and antiphonal performance may help the singing of the entire text. Jacobus J. Kloppers (PHH 87) initially wrote the 1987 harmonization for use by The King's College Choir, Edmonton, Alberta, and subsequently included it in a hymn concertato.

Text: Give Thanks to God, the Father
^ top 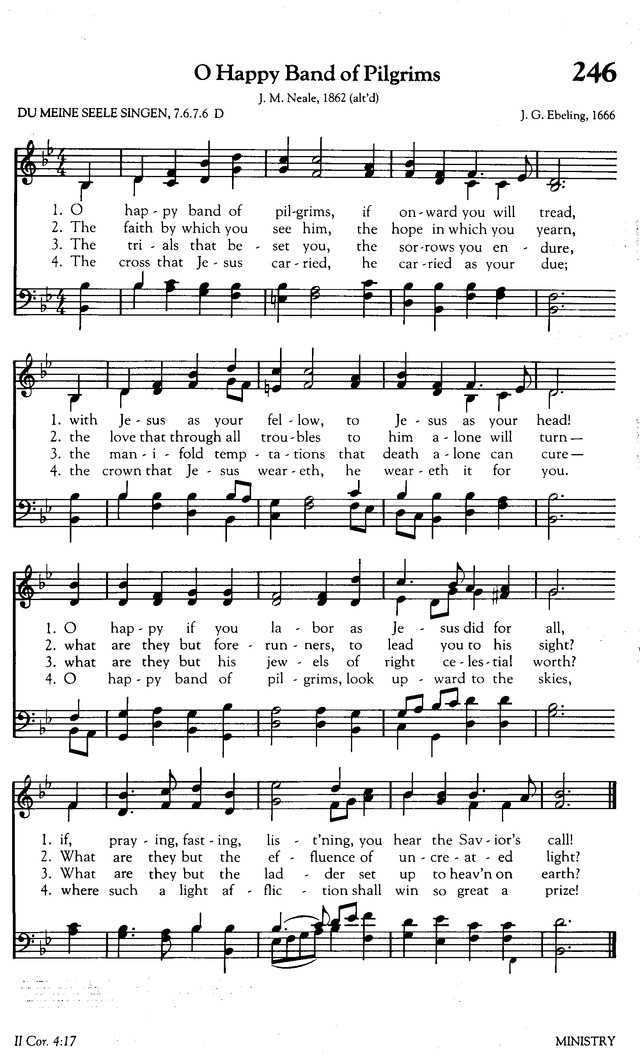