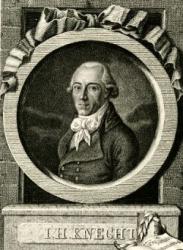 Justin Heinrich Knecht Germany 1752-1817. Born at Biberach Baden-Wurttemberg, Germany, he attended a Lutheran college in Esslingen am Meckar from 1768-1771. Having learned the organ, keyboard, violin and oratory, he became a Lutheran preceptor (professor of literature) and music director in Biberach. It was a free imperial city until 1803 and had a rich cultural life. He became organist of St. Martin’s Church in 1792, used by both Lutherans and Catholics, and was there for many years. He led an energetic, busy musical life, composing for both the theatre and church, organizing subscription concerts, teaching music theory, acoustics, aesthetics, composition, and instruments at the Gymnasium, affiliated to the Musikschule in 1806. He w… Go to person page >

Husband, Edward was educated at St. Aidan's College, Birkenhead. Taking Holy Orders in 1866, he was successively Curate of Atherstone and Folkestone; and in 1878 Vicar of St. Michael and All Angels, Folkestone. In 1874 Mr. Husband published The Mission Hymnal, in which appeared his hymns as follows:— 1. Alas! poor world, I loved thee long. Rest in Jesus. 2. And dost Thou ask me, dearest Lord. Christ's Invitation, " Follow Me." 3. I must have Jesus only. Jesus only desired 4. Sweet Blood, dear ransom of our souls. The Blood of Jesus. These hymns are very simple, earnest, and impassioned: and bear a great resemblance to Facer's compositions. --John Julian, Dictionary of Hymnology (1907)  Go to person page >
^ top

The original form of ST. EDITH (also known as ST. HILDA) was composed in 1793 by Justin Heinrich Knecht for the text “Der neidern Menschhiet Hülle.” It was published in Vollstandige Sammlung … Choralmelodien (1799), edited by Johann Friedrich Christmann and Knecht, who composed ninety-seven of the tunes in the collection.

Knecht (b. Biberach, Germany, 1752; d. Biberach, 1817) mastered the flute, oboe, trumpet, violin, and organ. He taught literature in Biberach and became the town’s music director in 1792, pioneering the use of program notes in his public concerts. After serving as director of the theater orchestra in Stuttgard (1807-1809), he returned to Biberach for the rest of his life. Knecht was a prolific composer of songs for the stage, church music for the organ and choir, and instrumental pieces. He also wrote several theoretical works on music and method books for organ playing.

Edward Husband (b. Hampshire, England, 1843; d. Folkestone, Kent, England 1908) exchanged two lines of the original tune with two lines of his own in 1871 to produce the current setting. Educated at St. Aidan’s College, Birkenhead, Husband was ordained in the Church of England in 1867. He was a pastor in Atherton from 1866 to 1872, after which he served at St. Michael and All Angels’ Church in Folkestone. In 1885 he compiled an Appendix of hymn tunes for the Folkestone church. An organ teacher as well as a pastor, Husband edited The Mission Hymnal (1874) and Supplemental Tunes to Popular Hymns (1882).

The tune title refers to the tenth-century British virgin Edith of Wilton (near Salisbury, Wiltshire), who refused various important positions and instead served the poor. Sing this tune in four broad phrases with rhythmic precision.

Text: O Master, When Thou Callest

Text: Sing to the Lord of Harvest

Text: How Lovely Is Your Dwelling
^ top 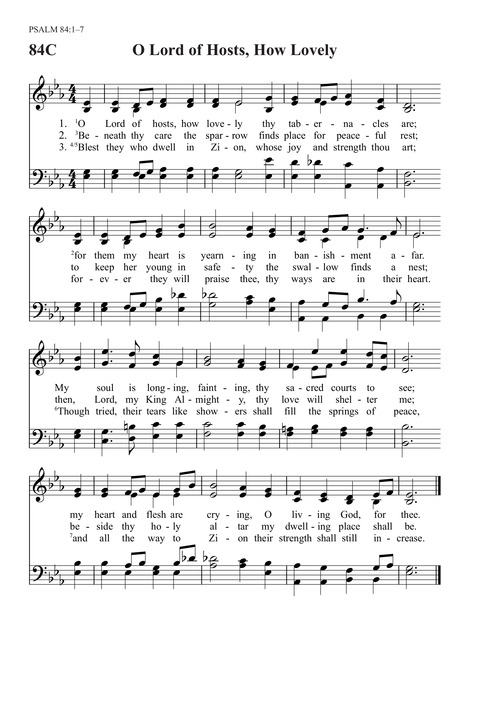 Psalms for All Seasons #84A