James Henry Fillmore USA 1849-1936. Born at Cincinnati, OH, he helped support his family by running his father's singing school. He married Annie Eliza McKrell in 1880, and they had five children. After his father's death he and his brothers, Charles and Frederick, founded the Fillmore Brothers Music House in Cincinnati, specializing in publishing religious music. He was also an author, composer, and editor of music, composing hymn tunes, anthems, and cantatas, as well as publishing 20+ Christian songbooks and hymnals. He issued a monthly periodical “The music messsenger”, typically putting in his own hymns before publishing them in hymnbooks. Jessie Brown Pounds, also a hymnist, contributed song lyrics to the Fillmore Music Hous… Go to person page >
^ top

I Will Sing of the Mercies of the Lord

James Henry Fillmore (b. Cincinnati, OH, 1849; d. Cincinnati, 1936) began his musical career by teaching music classes in a singing school and by selling music books (mainly those published by his father). The success of these early sales enabled him to establish, with his brother Frank, the Fillmore Brothers Music House of Cincinnati (sold to Carl Fischer in 1951). The company became very successful, especially in the publishing of Sunday school music, gospel songs, temperance and prohibition songs, and general sheet music. Fillmore issued a monthly periodical, The Musical Messenger, in which he initially published his hymns before issuing them in hymnals such as Songs of Glory (1874), New Christian Hymn and Tune-Book (1882), and The Praise Hymnal (1912).

FILLMORE is one of the most popular Scripture songs of the later twentieth century. The diatonic tune and simple harmonization is effective-if not overused. Accompany with guitar and/or keyboard. Organ accompaniment should be rhythmically crisp over a legato pedal.

Text: I Will Sing of the Mercies of the LORD
^ top 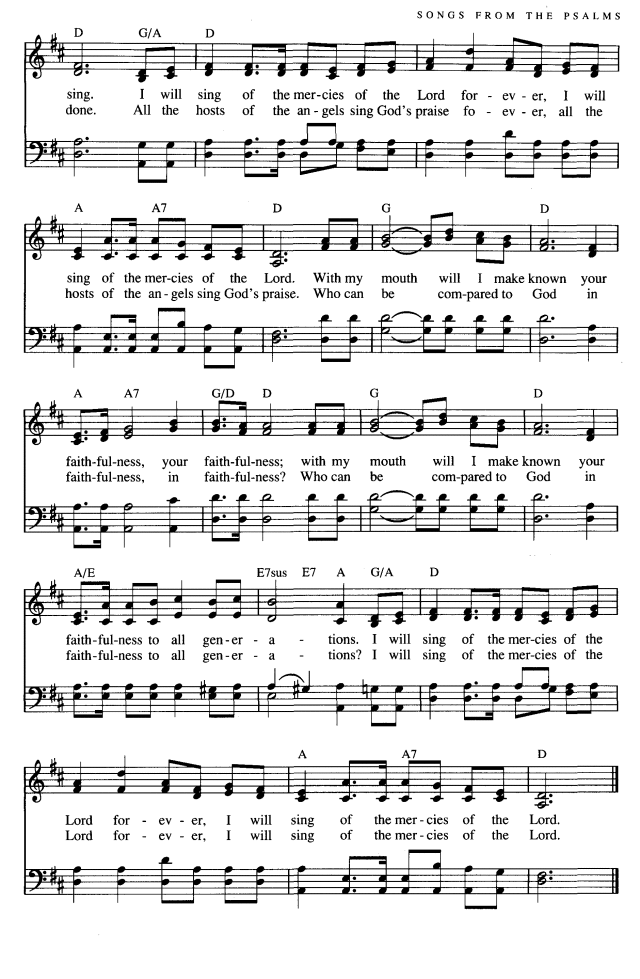 Hymns for a Pilgrim People #44

Psalms for All Seasons #89A

Tune Title: FILLMORE First Line: I will sing of the mercies of the Lord
Small Church Music #788

The Hymnal for Worship and Celebration #457