I Come with Joy

All texts published with LAND OF REST (American)^ top

LAND OF REST is an American folk tune with roots in the ballads of northern England and Scotland. It was known throughout the Appalachians; a shape-note version of the tune was published in The Sacred Harp (1844) and titled NEW PROSPECT as the setting for "O land of rest! for thee I sigh." The tune was published again with that same text in J. R. Graves's Little Seraph (Memphis, 1873). The name LAND OF REST derives from the tune's association with that text.

The tune was known to Annabel M. Buchanan (b. Groesbeck, TX, 1888; d. Paducah KY, 1983), whose grandmother sang it to her as a child. She harmonized the tune and published it in her Folk Hymns of America (1938), noting similarities between this tune and the tune for "Swing Low, Sweet Chariot" (616).

Known especially as a musicologist of American folk music, Buchanan was educated at the Landon Conservatory, Dallas, Texas, and the Guilmant Organ School, New York City. She taught at several colleges, including Stonewall Jackson College, Abingdoll, Virginia. Buchanan published numerous articles on folk traditions of the Appalachian area of the United States. She also lectured widely on this topic and gave recitals of folk music. Her own compositions also show the influence of folk music.

Like many other folk tunes, LAND OF REST should be sung rather lightly and energetically with two pulses per measure, and faster in a small group. Sing stanzas 1 and 2 in unison (or using a soloist) and stanzas 3 through 5 in harmony.

Text: I Come with Joy to Meet My Lord

Text: Lord, Who Throughout These Forty Days
^ top 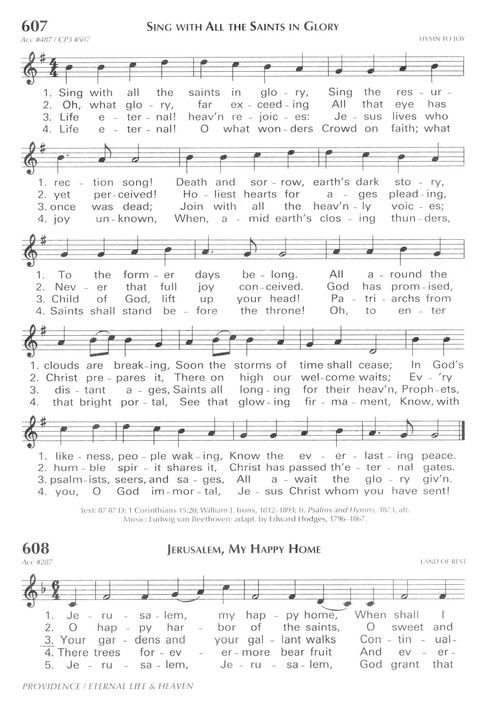 Include 10 pre-1979 instances
All instances^ top
Suggestions or corrections? Contact us