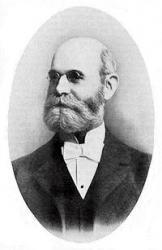 William J. Kirkpatrick (b. Duncannon, PA, 1838; d. Philadelphia, PA, 1921) received his musical training from his father and several other private teachers. A carpenter by trade, he engaged in the furniture business from 1862 to 1878. He left that profession to dedicate his life to music, serving as music director at Grace Methodist Church in Philadelphia. Kirkpatrick compiled some one hundred gospel song collections; his first, Devotional Melodies (1859), was published when he was only twenty-one years old. Many of these collections were first published by the John Hood Company and later by Kirkpatrick's own Praise Publishing Company, both in Philadelphia. Bert Polman Go to person page >
^ top