Henry Lahee (b. Chelsea, London, England, 1826; d. Croydon, London, 1912) composed NATIVITY, which was first published in 1855 and set to a nativity hymn (thus the tune's title), "High let us swell our tuneful notes," by Philip Doddridge (PsH 335). Because NATIVITY was published with Isaac Watts' (PsH 155) "Come let us join our cheerful songs" in the 1875 edition of Hymns Ancient and Modern, it has often been set to that text. NATIVITY is the only Lahee tune still in common use.

After studying music privately, Lahee became organist at several churches. His most prominent position was at Holy Trinity Church, Brompton, England, where he was organist from 1847-1874. While in that position he joined his vicar, W. J. Irons, in producing The Metrical Psalter (1855); NATIVITY was included in an appendix to that collection. A composer of cantatas and many madrigals and glees, Lahee also compiled One Hundred Hymn Tunes (1857) for use with a collection of hymn texts edited by Irons.

A cheerful tune, NATIVITY is distinguished both by its brevity and by its opening dramatic "rocket" figure. Sing in two long lines with stanzas 1 and 5 in unison and stanzas 24 in harmony. The fanfare-like opening and royal character of this psalm invite brass accompaniment.

For the final stanza, add the fine descant by Florence Mary Spencer Palmer ("Peggy"; b. Thornbury, Gloucestershire, England, 1900; d. Bristol, England, 1987) from the Anglican Hymn Book, 1965. Palmer studied piano and composition in her youth and later taught those disciplines, both privately and at various schools in the Bristol area. In addition to her many hymn tunes she composed music for piano, cello, and voice.

Text: Now Shall My Solemn Vows Be Paid

Text: Sing We the Song

Text: Blest Be The Everlasting God

Text: Christ Is the King and He Shall Reign
^ top 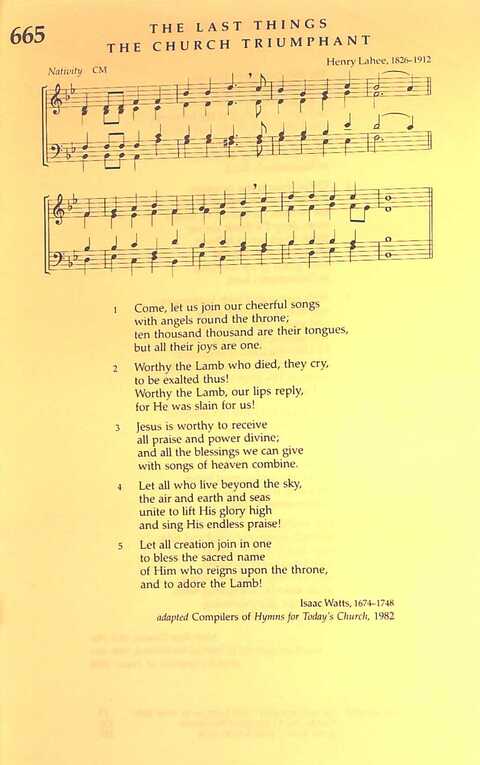 Tune Title: NATIVITY First Line: Sing we the song of those who stand Date: 1983
Hymns and Psalms #821