Just as I Am, Without One Plea

Just as I am, without one plea,
but that thy blood was shed for me,
and that thou bidd'st me come to thee,
O Lamb of God, I come, I come.

Composed by George J. Elvey (PHH 48) in 1862 for 'Just as I Am, without One Plea" (263), ST. CRISPIN was first published in the 1863 edition of Edward Thorne's Selection of Psalm and Hymn Tunes. The tune title honors a third-century Roman martyr, Crispin, who, along with Crispinian, preached in Gaul (modern-day France); these two missionaries are the patron saints of shoemakers and leather workers.

ST. CRISPIN has an attractive melodic contour. Its repeated notes are typical of other "generic" British hymn tunes from the later nineteenth century (for example, QUEBEC, 141,307; PENTECOST, 212; MORECAMBE, 419; and MARYTON, 573). Sing it in harmony, perhaps unaccompanied on one of the inner stanzas. The parallel structure of the text also invites singing stanzas in alternation between either men or women or two sides of the congregation.

Text: An Awe-full Mystery Is Here

Text: God Loved the World So That He Gave

Text: Ho! Every One That Thirsts, Draw Nigh

Text: And Is The Gospel Peace And Love?

Text: Behold The Potter And The Clay

Text: Buried In Shadows Of The Night

Text: The Claims Of The Poor

Text: Teach Me, O Lord, Your Way of Truth
^ top 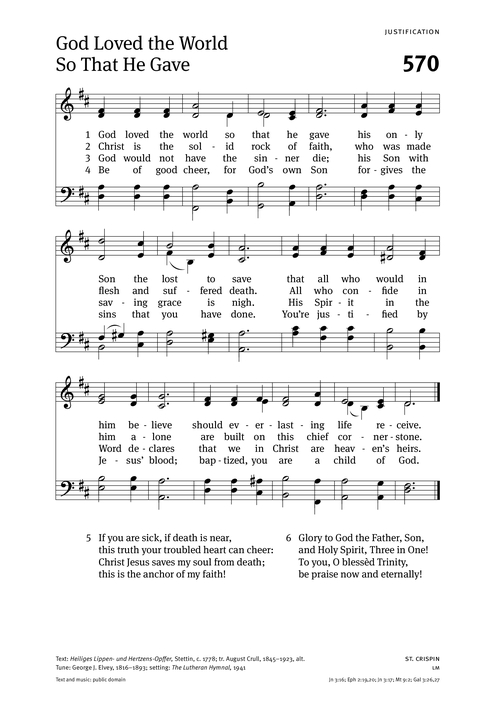 Psalms for All Seasons #119B

Psalms for All Seasons #119C

Psalms for All Seasons #119D

Psalms for All Seasons #119E