God’s children are called to and gathered to give worship to all three members of the Trinity. Belgic Confession, Article 8, gives the clearest explanation of the three persons of the Trinity, including not only their identity, but also their nature and tasks: “The Father is the cause, origin, and source of all things, visible and invisible. The Son is the Word, the Wisdom, and the image of the Father. The Holy Spirit is the eternal power and might, proceeding from the Father and the Son.”

Heidelberg Catechism, Lord’s Day 8, Questions and Answers 24 and 25 does so in much briefer form. As does the Belhar Confession, Section 1: “We believe in the triune God, Father, Son and Holy Spirit, who gathers, protects and cares for the church through Word and Spirit. This, God has done since the beginning of the world and will do to the end.”

God of life and transformation,
you have broken into the deathly silence of our sin
and restored your song of life and triumph.
By the power of your Spirit, inspire us to shout your praise with joy
and to tell of the wonderful things you have done, through Jesus Christ our Lord. Amen.
— Psalms for All Seasons (http://www.psalmsforallseasons.org)
496

This song functions well as a processional or an entrance into worship. Once it is known by a community, it is not necessary to sing from the page. A leader can sing out the text for the next stanza while the congregation sings the final syllable (e.g., singing “Come praise the Savior!”). Accompany with djembes, shakers, triangle, cowbell, hand claps—anything that will enliven the singing without overwhelming it. When used as a frame for the psalm, keep a soft drum pattern going under the reading.
— Psalms for All Seasons (http://www.psalmsforallseasons.org)
496

Alexander Gondo, a pastor from Zimbabwe, was a founding member of the African Association of Musicians and its first secretary. This song was made known beyond Africa by the work of I-to Loh; it was published in Songs of Worship (1986) and has since become a beloved gathering song around the world. Two new English stanzas, changing only one word to extend our praise to the Triune God, were published in the Lutheran collection With One Voice (1995).
— Emily Brink

I-to Loh (b. Tamsui, Taiwan, September 28, 1936) graduated from Tainan Theological College and Seminary (TTCS: MDiv, 1963), Union Theological Seminary, New York (SMM, composition, 1966), and the University of California at Los Angeles (UCLA: PhD, music/ethnomusicology, 1982). He has taught at his alma mater, TTCS, and served as the head of the Department of Church Music for many years; he also served as the president of the seminary from 1995 until his retirement in 2002.
He was sent as a United Methodist missionary to teach at the Asian Institute for Liturgy and Music (AILM; 1982-94); in this capacity, he traveled and promoted contextual Asian church music and liturgy in many member churches of the Christian Conference of Asia (CCA), and he edited the 1990 and 2000 editions of Sound the Bamboo: CCA Hymnal. Loh was a consultant and animateur to three General Assemblies of WCC (1983, 1991, and 1998), and he was the director of music at five General Aseembly of LWF (Lutheran World Federation, 1997), the twenty-third Congress of WARCH (World Association of Reformed Church, 1997, co-director), the World Alliances of YMCAs (1984, animateur), and the Asian Alliance of YMCAs (1987 and 1989).
He has lectured in numerous Ecumenical Workshops on Liturgy and Music, sponsored by WCC and CCA around the globe, and he has taught at Taiwan Theological College and Seminary, Tunghai University, Soochow University, and Tainan Teacher’s College. He has published twenty-one books and collections of hymns/songs from Asia and Africa, including: New Songs of Asian Cities (1972), A Festival of Asian Christmas Carols (1984), Let the Hills Sing (1986), African Songs of Worship (1986), Sing a New Song to the Lord (1987), Christ the Light to Bali (1987), Hakka Songs of Worship (1987), The Love of God Sets Us Free (1988), Thousands and Thousands of Songs Full of Praise (audiocassette, 1990), All Peoples Praise (1995), and Jyothi Do Prabhu (recordings of bhajans and lyrics from India, 1996). In addition to writing dozens of academic papers, he published the monograph Teach Us to Praise (1992, revised 2002).
Loh has translated more than 300 hymns from English and other languages to Taiwanese or Mandarin, and he has published more than one hundred hymns, liturgical responses, and acclamations in Asia and North America. He is the editor of the official hymnal of the Presbyterian Church in Taiwan, Sengsi, 2009. For his contributions to hymnology, he was named a Fellow of the Hymn Society of North American and Canada in 1995. He received the 2006 Distinguished Service Award from the Global Consultation on Music and Missions. Also in 2006, Loh’s first CD, Originality, a collection of his choral compositions, won the award fro the best production of classical composition at the seventeenth Gold Music Prizes of the Bureau of News and Information of the Taiwan Government. His wife, Hui-chin (MDiv, TTCS; MRE, Princeton Theological Seminary) is a specialist in Christian education and has helped with all of his publications; they have three children and six grandchildren.
In January 2014, GIA released a Christian Music from Asia to the World: The Life and Legacy of I-To Loh, in tribute to his many contributions to Christian Asian song.
I-to Loh, Hymnal Companion to “Sound the Bamboo”: Asian Hymns in Their Cultural and Liturgical Context, p. 453-54, ©2011 GIA Publications, Inc., Chicago
— I-to Loh

John Bell (b. 1949) was born in the Scottish town of Kilmarnock in Ayrshire, intending to be a music teacher when he felt the call to the ministry. But in frustration with his classes, he did volunteer work in a deprived neighborhood in London for a time and also served for two years as an associate pastor at the English Reformed Church in Amsterdam. After graduating he worked for five years as a youth pastor for the Church of Scotland, serving a large region that included about 500 churches. He then took a similar position with the Iona Community, and with his colleague Graham Maule, began to broaden the youth ministry to focus on renewal of the church’s worship. His approach soon turned to composing songs within the identifiable traditions of hymnody that found began to address concerns missing from the current Scottish hymnal:
I discovered that seldom did our hymns represent the plight of poor people to God. There was nothing that dealt with unemployment, nothing that dealt with living in a multicultural society and feeling disenfranchised. There was nothing about child abuse…, that reflected concern for the developing world, nothing that helped see ourselves as brothers and sisters to those who are suffering from poverty or persecution. [from an interview in Reformed Worship (March 1993)]
That concern not only led to writing many songs, but increasingly to introducing them internationally in many conferences, while also gathering songs from around the world. He was convener for the fourth edition of the Church of Scotland’s Church Hymnary (2005), a very different collection from the previous 1973 edition. His books, The Singing Thing and The Singing Thing Too, as well as the many collections of songs and worship resources produced by John Bell—some together with other members of the Iona Community’s “Wild Goose Resource Group,” are available in North America from GIA Publications.
— Emily Brink

Alexander Gondo (b. Zimbabwe, 20th century) is a church musician in Zimbabwe. The Shona tribe is one of two primary tribes in Zimbabwe. This song is often sung by children.
— Sing! A New Creation 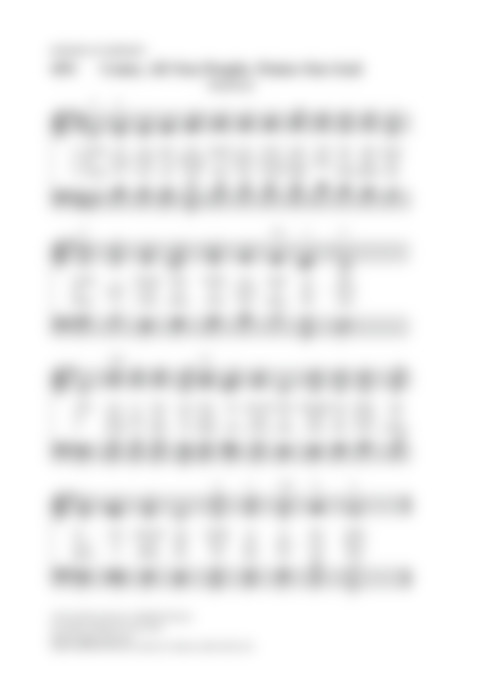