When the fullness of time had come,
God sent his Son, born of a woman, born under the law,
in order to redeem those who were under the law,
so that we might receive adoption as children.
—Galatians 4:4-5, NRSV
— Worship Sourcebook Edition Two
In the past God spoke to our ancestors
through the prophets at many times and in various ways,
but in these last days he has spoken to us by his Son,
whom he appointed heir of all things,
and through whom also he made the universe.
The Son is the radiance of God’s glory
and the exact representation of his being,
sustaining all things by his powerful word.
After he had provided purification for sins,
he sat down at the right hand of the Majesty in heaven.
—Hebrews 1:1-3, NIV
[The Worship Sourcebook]
— Worship Sourcebook Edition Two
We confess that God fulfilled the promise
made to the early fathers and mothers
by the mouth of the holy prophets
when he sent the only and eternal Son of God
into the world at the time appointed.
The Son took the “form of a slave”
and was made in “human form,”
truly assuming a real human nature,
with all its weaknesses, except for sin;
being conceived in the womb of the blessed virgin Mary
by the power of the Holy Spirit,
without male participation.
And Christ not only assumed human nature
as far as the body is concerned
but also a real human soul,
in order to be a real human being.
For since the soul had been lost as well as the body,
Christ had to assume them both to save them both together.
In this way Christ is truly our Immanuel—
that is: “God with us.”
—from Belgic Confession, Art. 18
— Worship Sourcebook Edition Two
What does it mean that he
“was conceived by the Holy Spirit
and born of the virgin Mary”?
That the eternal Son of God,
who is and remains true and eternal God,
took to himself, through the working of the Holy Spirit,
from the flesh and blood of the virgin Mary,
a truly human nature
so that he might become David’s true descendant,
in all things like us except for sin.
—from Heidelberg Catechism, Q&A 35
— Worship Sourcebook Edition Two

You came in the fullness of time, O Savior,
emptying yourself for us.
Your incarnation foreshadowed, O Savior,
that you would be obedient unto death.
Therefore God has given you, O Savior,
a name that is above all names:
we confess you are Christ the Lord!
—based on Philippians 2:5-11
[The Worship Sourcebook]
— Worship Sourcebook Edition Two
79

This German carol is too often sung slowly, with the pulse at the quarter note. Let the song’s inner-rhythms emerge by feeling the pulse at the half note. That will allow the subtle syncopations of “from tender stem hath sprung” play against the half note meter. At the end of the first phrase, lift off of the word “sprung” without a fermata and begin the next phrase in time, otherwise the song will get slower and slower with each verse.
— Greg Scheer
In introducing this lovely meditative hymn to your congregation, the organist may well begin with one or two of many organ settings. The just-published Bibliography of Organ Music Based on Tunes in the Psalter Hymnal and Rejoice in the Lord lists more than a dozen (see p. 47). The setting straight out of the Psalter Hymnal is lovely with unison children's voices or in harmony with an adult choir. A choir may also wish to try one of the settings by Hugo Distler (Arista, AE 109).
When the congregation sings this hymn, the organ should play just loud enough to lend support; a soft, gentle accompaniment fits the character of the song.
(from Reformed Worship, Issue 9)
— Emily Brink
79

This “Twelfth Night” German carol from the Rhineland region combines the story of Luke 1-2 and Matthew 2 with Isaiah's prophecies about the "rose" from the "stem of Jesse " (Isa. 11:1; 35:1-2). Stanzas 1 and 2 are a combination of folklore ("amid the cold of winter") and Christological interpretation of Isaiah 11:1 and 35: 1-2. Stanza 3 introduces imagery from John 1.
Originally "Es ist ein Ros entsprungen," the carol may date back to the fifteenth century. However, the earliest manuscript containing the text, found in St. Alban's Carthusian monastery in Trier and preserved in the Trier munici­pal library, is dated around 1580. It was first published with twenty-three stanzas in Alte catholische geistliche Kirchengesänge (Cologne, 1599). Originally stanza 2 interpreted the "rose" as being Mary, mother of Jesus. But in Musae Sionae (1609) Michael Praetorius changed the interpretation to point to Christ as the rose in accord with actual biblical imagery. In that hymnbook, Praetorius published only stanzas 1 and 2.
First published with the text in the Cologne Gesangbuch of 1599 (see above), the tune ES IST EIN ROS is a rounded bar form tune (AABA). The tune has characteristics of a Renaissance madrigal; it invites performance by an unaccompanied choir so that all the fine part writing and subtle rhythms can be clearly heard. ES IST EIN ROS is also a fine congrega­tional tune or a children's choir anthem. Sing in unison with delicate accompaniment. Be sure to articulate carefully on the organ or piano those repeated melody tones.
— Bert Polman

The English translation of stanzas 1 and 2 are by Theodore Baker (b. New York, NY, 1851; d. Dresden, Germany, 1934) and are possibly from anthem setting published by G. Schirmer, Inc., in 1894 when Baker was music editor there. Baker is well known as the compiler of Baker's Biographical Dictionary of Musicians (first ed. 1900), the first major music reference work that included American composers. Baker studied music in Leipzig, Germany, and wrote a dissertation on the music of the Seneca people of New York State–one of the first studies of the music of American Indians. From 1892 until his retirement in 1926, Baker was a literary editor and transla­tor for G. Schirmer, Inc., in New York City. In 1926, he returned to Germany.
Stanza 3 is a translation by Gracia Grindal (b. Powers Lake, ND, 1943), originally published in the Lutheran Book of Worship (1978). Grindal was educated at Augsburg College, Minneapolis, Minnesota; the University of Arkansas; and Luther-Northwestern Seminary, St. Paul, Minnesota, where she has served since 1984 as a professor of pastoral theology and communications. From 1968 to 1984 she was a professor of English and poet-in-residence at Luther College, Decorah, Iowa. Included in her publications are Sketches Against the Dark (1981), Scandinavian Folksongs (1983), Lessons in Hymnwriting (1986, 1991), We Are One in Christ: Hymns, Paraphrases, and Translations (1996), Good News of Great Joy: Advent Devotions for the Home (1994 with Karen E. Hong), Lisa sandell, the Story of Her Hymns (2001 with John Jansen), and A Revelry of Harvest: New and Selected Poems (2002). She was instrumental in producing the Lutheran Book of Worship (1978) and The United Methodist Hymnal (1989).
Stanza 4 is written by John C. Mattes (1876-1948).
— Bert Polman

The revised text and new harmonization in 1609 by Michael Praetorius (b. Kreutzburg, Thuringia, Germany, 1571; d. Wolfenbiittel, near Brunswick, Germany, 1621) turned "Lo, How a Rose" into a beautiful and popular hymn. Born into a staunchly Lutheran family, Praetorius was educated at the University of Frankfort-an-der-Oder. In 1595 he began a long association with Duke Heinrich Julius of Brunswick, when he was appoint­ed court organist and later music director and secretary. The Duke resided in Wolfenbüttel, and Praetorius spent much of his time at the court there, eventually establishing his own residence in Wolfenbüttel as well. When the Duke died, Praetorius officially retained his position, but he spent long periods of time engaged in various musical appointments in Dresden, Magdeburg, and Halle. Praetorius produced a prodigious amount of music and music theory. His church music consists of over one thousand titles, including the sixteen-volume Musae Sionae (1605-1612), which contains Lutheran hymns in settings ranging from two voices to multiple choirs. His Syntagma Musicum (1614-1619) is a veritable encyclopedia of music and includes valuable information about the musical instruments of his time.
— Bert Polman

This Advent and Christmas hymn expresses and acknowledges a particular tension we ought to be aware of during the Christmas season. Just as, in the prophecies from Isaiah, a “rose,” or stem, shoots up from the stump, so too we celebrate Christ’s birth in the knowledge that he brings life out of death. Our celebrations of Christmas must always point us to Easter. We celebrate Christ’s life because his death brings us new life. So too, the season of Advent points us not only to Christmas, but to the second coming of Christ, when He will finally make all things new. This is a beautiful and peaceful hymn, but there is just a touch of melancholy in the tune. Even in the arrangement the composer was able to convey the tension amidst our celebration, the sorrow that must lie within our rejoicing, if only for a moment. We know what is coming that week before Easter morning, and this should give us reason to pause. But we also know that the tiny babe whose birth we celebrate, “This flower, so small and tender, with fragrance fills the air; his brightness ends the darkness that kept the earth in fear.” Thus, even amid the tension of life out of death, we celebrate the ultimate life we are promised in Christ.
— Laura de Jong 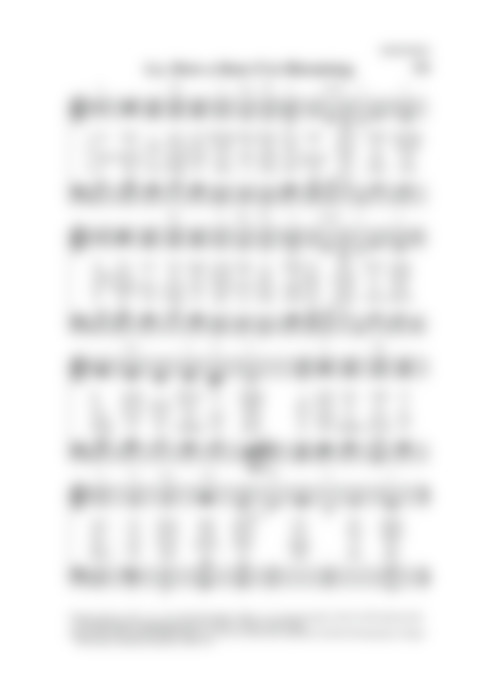