Lo, how a rose e'er blooming

1 Lo, how a Rose e'er blooming
From tender stem hath sprung!
Of Jesse's lineage coming
As men of old have sung.
It came, a flower bright,
Amid the cold of winter
When half-gone was the night.


2 Isaiah 'twas foretold it,
The Rose I have in mind:
With Mary we behold it,
The virgin mother kind.
To show God's love aright
She bore to men a Savior
When half-gone was the night.


3 This Flower, whose fragrance tender
With sweetness fills the air,
Dispels with glorious splendor
The darkness everywhere.
True man, yet very God,
From sin and death He saves us
And lightens every load

Theodore Baker (b. New York, NY, 1851; d. Dresden, Germany, 1934). Baker is well known as the compiler of Baker's Biographical Dictionary of Musicians (first ed. 1900), the first major music reference work that included American composers. Baker studied music in Leipzig, Germany, and wrote a dissertation on the music of the Seneca people of New York State–one of the first studies of the music of American Indians. From 1892 until his retirement in 1926, Baker was a literary editor and translator for G. Schirmer, Inc., in New York City. In 1926, he returned to Germany. Psalter Hymnal Handbook, 1987 Go to person page >
^ top

This “Twelfth Night” German carol from the Rhineland region combines the story of Luke 1-2 and Matthew 2 with Isaiah's prophecies about the "rose" from the "stem of Jesse " (Isa. 11:1; 35:1-2). Stanzas 1 and 2 are a combination of folklore ("amid the cold of winter") and Christological interpretation of Isaiah 11:1 and 35: 1-2. Stanza 3 introduces imagery from John 1.

Originally "Es ist ein Ros entsprungen," the carol may date back to the fifteenth century. However, the earliest manuscript containing the text, found in St. Alban's Carthusian monastery in Trier and preserved in the Trier munici¬pal library, is dated around 1580. It was first published with twenty-three stanzas in Alte catholische geistliche Kirchengesiinge (Cologne, 1599). Originally stanza 2 interpreted the "rose" as being Mary, mother of Jesus. But in Musae Sionae (1609) Michael Praetorius changed the interpretation to point to Christ as the rose in accord with actual biblical imagery. In that hymnbook Praetorius published only stanzas 1 and 2.

The English translation of stanzas 1 and 2 in the Psalter Hymnal are by Theodore Baker (b. New York, NY, 1851; d. Dresden, Germany, 1934) and are possibly from anthem setting published by G. Schirmer, Inc., in 1894 when Baker was music editor there. Baker is well known as the compiler of Baker's Biographical Dictionary of Musicians (first ed. 1900), the first major music reference work that included American composers. Baker studied music in Leipzig, Germany, and wrote a dissertation on the music of the Seneca people of New York State–one of the first studies of the music of American Indians. From 1892 until his retirement in 1926, Baker was a literary editor and translator for G. Schirmer, Inc., in New York City. In 1926, he returned to Germany.

Stanza 3 is a translation by Gracia Grindal (b. Powers Lake, ND, 1943), originally published in the Lutheran Book of Worship (1978). Grindal was educated at Augsburg College, Minneapolis, Minnesota; the University of Arkansas; and Luther-Northwestern Seminary, St. Paul, Minnesota, where she has served since 1984 as a professor of pastoral theology and communications. From 1968 to 1984 she was a professor of English and poet-in-residence at Luther College, Decorah, Iowa. Included in her publications are Sketches Against the Dark (1981), Scandinavian Folksongs (1983), Lessons in Hymnwriting (1986, 1991), and We Are One in Christ: Hymns, Paraphrases, and Translations (1996). She was instrumental in producing the Lutheran Book of Worship (1978) and The United Methodist Hymnal (1989).

Liturgical Use:
Advent and the Christmas season; useful as a response to the Isaiah 11 passage, especially in services of lessons and carols or "carols from many lands."

All tunes published with 'Lo, How a Rose E'er Blooming'^ top

This Advent and Christmas hymn expresses and acknowledges a particular tension we ought to be aware of during the Christmas season. Just as, in the prophecies from Isaiah, a “rose,” or stem, shoots up from the stump, so too do we celebrate Christ’s birth in the knowledge that He brings life out of death. Our celebrations of Christmas must always point us to Easter. We celebrate Christ’s life because His death brings us a new kind of life. So too, the season of Advent points us not only to Christmas, but to the second coming of Christ, when He will finally make all things new. This is a beautiful and peaceful hymn, but there is just a touch of melancholy in the tune. Even in the arrangement the composer was able to convey the tension amidst our celebration, the sorrow that must lie within our rejoicing, if only for a moment. We know what is coming that week before Easter morning, and this should give us reason to pause. But we also know that the tiny babe whose birth we celebrate, our “Rose,” came to “dispel…the darkness everywhere.” Thus, even amid the tension of life out of death, we celebrate the ultimate life we are promised in Christ.

This hymn may date back as far as the fifteenth century, though the earliest manuscript was found in St. Alban’s Carthusian monastery in Trier and was dated around 1580. It was first published with a whopping twenty-three stanzas in Alte Catholische Geistliche Kirchengesange in 1599.

Originally written in German and titled “Es ist ein Ros ensprungen,” the text combines the story of Christ’s birth with the prophecies in Isaiah about the “rose” from the “stem of Jesse.” The second verse originally interpreted “rose” to mean Mary, the mother of Jesus, but in 1609, Michael Praetorius changed the interpretation to point to Christ, thus fitting with the actual Biblical imagery. He then published the hymn with only stanzas one and two and added a harmonization. The first two verses were translated into English by Theodore Baker around 1894.

Most hymnals include the first two verses, and many add a third that begins, “This flower, so small and tender.” This verse is included in The Baptist Hymnal as seen in the above text box. Though it is included in many hymnals, it does not appear to have come from the original text.

Paul Westermeyer writes that the tune ES IST EIN ROS “has the unusual capacity to lend itself equally well to both congregational and choral singing, with and without harmony in both cases” (Let the People Sing, 138). The Psalter Hymnal Handbook describes the harmony and rhythm as “subtle,” so it isn’t necessary to use much, if any, accompaniment. For a quirky folk version, check out Sufjan Steven's banjo-led recording. Of if you're more a fan of rock and roll, Sting has a very simple rendition featured in his "Life from Durham Cathedral" concert. There are multiple examples of a capella choral version - in particular the Montverdi Choir's German version.

This hymn is perfect for both Advent and Christmas, because it celebrates the birth of Christ but also acknowledges the tension of that birth – Christ was born to bring life out of death. As such, it is fitting for Advent when we wait for the second coming of Christ when He will make all things new. It’s a beautiful hymn for a Lessons and Carols service, and an especially apt selection for a celebration of carols from around the world. If you can, I would suggest having a choir sing the first verse in German, to express the history of the piece, and then return to the first verse with the congregation in English. 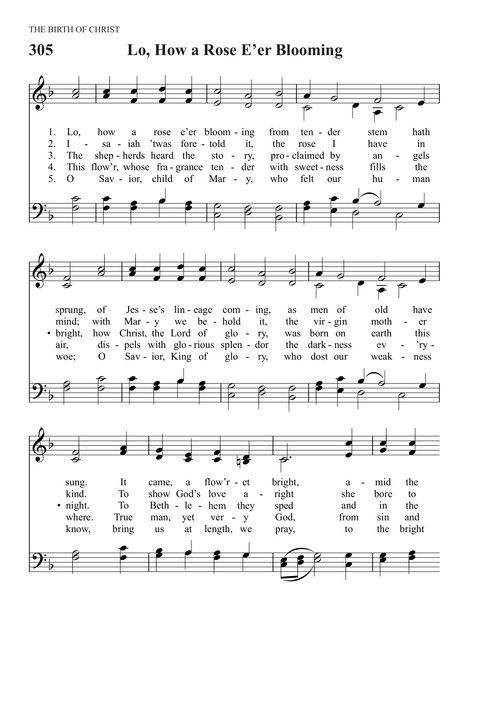 A New Hymnal for Colleges and Schools #235

Hymns for a Pilgrim People #133

The Hymnal for Worship and Celebration #160