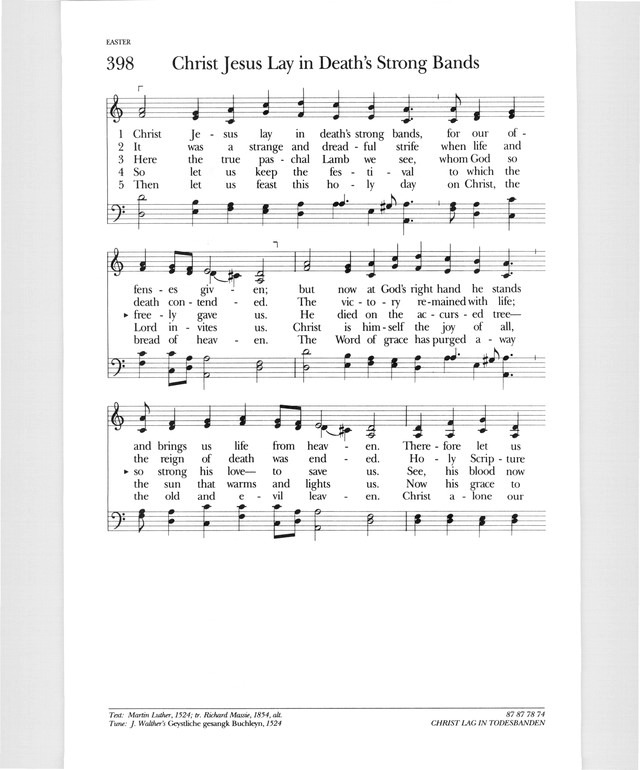 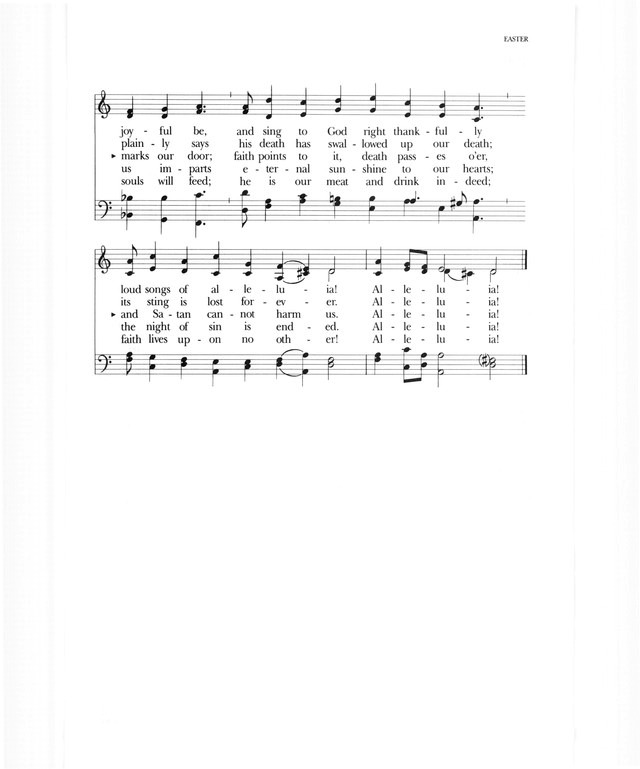 1 Christ Jesus lay in death's strong bands,
for our offenses given;
but now at God's right hand he stands
and brings us life from heaven.
Therefore let us joyful be,
and sing to God right thankfully
loud songs of alleluia!
Alleluia!


2 It was a strange and dreadful strife
when life and death contended.
The victory remained with life;
the reign of death was ended.
Holy Scripture plainly says
his death has swallowed up our death;
its sting is lost forever.
Alleluia!


3 Here the true paschal Lamb we see,
whom God so freely gave us.
He died on the accursed tree
so strong his love to save us.
See, his blood now marks our door;
faith points to it, death passes o'er,
and Satan cannot harm us.
Alleluia!


4 So let us keep the festival
to which the Lord invites us.
Christ is himself the joy of all,
the sun that warms and lights us.
Now his grace to us imparts
eternal sunshine to our hearts;
the night of sin is ended.
Alleluia!


5 Then let us feast this holy day
on Christ, the bread of heaven.
The Word of grace has purged away
the old and evil leaven.
Christ alone our souls will feed;
he is our meat and drink indeed;
faith lives upon no other!
Alleluia!

In preparing songs for congregational singing during the early years of the Reformation, Martin Luther (PHH 336) often turned to earlier sources. His intention with this chorale, published in the Erfurt Enchiridia (1524), was to "improve" an older German hymn–"Christ ist erstanden"–that was in turn based on a medieval sequence, "Victimae Paschali laudes," attributed to Wipo, chaplain to Emperor Henry III (1017¬-1056). Luther drew more on the original Latin text than on the German.

The English translation by Richard Massie (b. Chester, Cheshire, England, 1800; d. Pulford Hall, Coddington, England, 1887) was published in Massie's Martin Luther's Spiritual Songs (1854). Massie was the oldest of twenty-two children. Raised in the rectory of St. Bride's in Chester, he remained in the Chester area his entire life, inherit¬ed two estates, and had the luxury of being able to devote much of his time to literary pursuits. He taught himself German and translated many German hymns into English. His publications include Luther's Geistliche Lieder (1854), two volumes of Carl Spitta's hymns, Lyra Domestica (1860, 1864), and translations of chorales by Paul Gerhardt (PHH 331). Many of his translations were first published in William Mercer's (PHH 357) Church Psalter and Hymn Book (1854).

The text emphasizes Christ's conquest of death, breaking of Satan's power, and victory over the rule of evil (st. 1-3); it calls us to celebrate Christ's victory and his life-¬giving sacrifice of himself at the feast of the Lord's Supper (st. 4-5). The reference in stanza 4 and 5 to 1 Corinthians 5:7b-8, however, could be interpreted in a more general, non-sacramental way.

CHRIST LAG IN TODESBANDEN is an adaptation of a medieval chant used for "Victimae Paschali laudes" (the same chant is the source for CHRIST IST ERSTANDEN, 407). The tune's arrangement is credited to Johann Walther (b. Kahla, Thuringia, Germany, 1496: d. Torgau, Germany, 1570), in whose 1524 Geystliche Gesangk Buchleyn it was first published. But it is possible that Luther also had a hand in its arrangement.

Walther was one of the great early influences in Lutheran church music. At first he seemed destined to be primarily a court musician. A singer in the choir of the Elector of Saxony in the Torgau court in 1521, he became the court's music director in 1525. After the court orchestra was disbanded in 1530 and reconstituted by the town, Walther became cantor at the local school in 1534 and directed the music in several churches. He served the Elector of Saxony at the Dresden court from 1548 to 1554 and then retired in Torgau.

Walther met Martin Luther in 1525 and lived with him for three weeks to help in the preparation of Luther's German Mass. In 1524 Walther published the first edition of a collection of German hymns, Geystliche gesangk Buchleyn. This collection and several later hymnals compiled by Walther went through many later editions and made a permanent impact on Lutheran hymnody.

One of the earliest and best-known Lutheran chorales, CHRIST LAG IN TODESBANDEN is a magnificent tune in rounded bar form (AABA) with vigor and lightness characteristic of Easter carols. Many organ compositions are based on this tune; Johann S. Bach (PHH 7) incorporated it extensively in his cantatas 4 and 158.