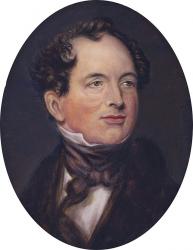 Thomas Moore United Kingdom 1779-1852. Born at Dublin, Ireland, the son of a grocer, he showed an early interest in music and acting. He was educated at a private school and Trinity College, Dublin. He read at the Middle Temple for the Bar. Moore did not profess religious piety. His translations of ‘Anacreon’ (celebrating wine, women, and song) were published in 1800, with a dedication to the Prince of Wales. He also wrote a comic opera, “the gypsy prince”, staged that year. In 1801 he published a collection of his own verse, “Poetical works of the late Thomas Little Esq”. A Catholic patriot, he defended the Church of Ireland, especially in later politics. In 1803 he held a post under the Government in Bermuda as registrar of the Admiralty Prize Court. He was bored of it within six months and appointed a deputy to take his place while he left for a tour of North America. He secured high society introductions and even met with President, Thomas Jefferson. Returning to England in 1804, he published “Epistles, Odes, & other poems” in 1806. Moore criticized American slavery and was accused of licentious writings, veiled as refinement. Francis Jeffrey denounced Moore’s writings in the ‘Edinburgh Review’, and Moore challenged him to a duel, but it never happened, and they became friends. Between 1808-1810 he was found acting in various plays, favoring comic roles. He met the sister of one of the actresses and, in 1811, they married. Elizabeth ‘Bessy’ Dyke, was an actress. She had no dowry, and Moore kept their marriage secret from his parents for some time, as his wife was Protestant. Bessie shrank from fashionable society, but those who met her held her in high regard. They had five children, but none survived to adulthood. Three girls died young, and both sons lost their lives as young men. One son, Tom, died in some disgrace in the French Foreign Legion in Algeria. Despite these losses, their marriage was said to be a happy one. He also had political trouble. The man he appointed as his replacement in Bermuda was found to have embezzled 6000 pounds sterling, a large sum, for which Moore was liable. He left for France in 1819 to escape debtor’s prison. He also met Lord Byron in Venice and was entrusted with a manuscript of his memoirs, which he promised to have published after Byron’s death. Moore’s wife and children joined him in Paris, where he learned that some of the debt was repaid with help from Lord Lansdowne, whom Moore had given a draft of money from payment by his publisher. The family returned to England a year later. To support his family Moore entered the field of ‘squib writing’ on behalf of his Whig friends. This resulted in years of political debate about Catholics and Protestants in government. Nearly persuaded to forego his Catholic allegiance in favor of Protestantism, he finally concluded that Protestants did not make a sound case for their faith, as they denounced Catholics so vociferously for erroneous teaching. From 1835 -1846 Moore published a four volume “History of Ireland”, which was basically an indictment of English rule over Ireland. He was primarily a writer, poet, entertainer, and composer, considered politically as a writer for the aristocratic Whigs. His “Sacred songs” (32) were published in 1816, and again, in his “collected works” in 1866. His “Memoirs, Journal, and Correspondence” were published by Lord John Russell in 1855. Moore is essentially remembered for his highly-praised lyrics written for Irish melodies, as requested by his publishers, and his memoirs of Lord Byron, his friend. He died at Bromham, Wilshire, England.

==================
Moore, Thomas, son of John Moore, a small tradesman at Dublin, was born in that city, May 28, 1779, educated at a private school and Trinity College, Dublin; read at the Middle Temple for the Bar; held a post under the Government in Bermuda for a short time, and died Feb. 26, 1852. His Memoirs, Journal, and Correspondence were published by Lord John Russell in 1855. In that work every detail concerning himself and his numerous publications, most of them of high poetical merit, will be found. His connection with hymnody is confined to his Sacred Songs, which were published in 1816, and again in his Collected Works, 1866. These Songs were 32 in all, and were written to popular airs of various nations. Of these Songs the following have passed into a few hymnbooks, mainly in America:—

1. As down in the sunless retreats of the ocean. Private Prayer.
2. But who shall see the glorious day. The Final Bliss of Man.
3. Come, ye disconsolate, where'er you languish. Belief in Prayer. In American hymnbooks the text is sometimes as in T. Hastings and Lowell Mason's Spiritual Songs, 1831. This may be distinguished from the original by the third stanza, which reads, "Here see the Bread of life; see waters flowing," &c.
4. Fallen is thy throne, O Israel. Israel in Exile.
5. Like morning when her early breeze. Power of Divine Grace.
6. O Thou Who driest the mourner's tear. Lent.
7. Since first Thy word [grace] awaked my heart. God All and in All.
8. Sound the loud timbrel o'er Egypt's dark sea. Deliverance of Israel.
9. The bird [dove] let loose in eastern skies. Prayer for Constancy.
10. The turf shall be my fragrant shrine. The Temple of Nature. From this "There's nothing bright above, below" is taken.
11. Thou art, O God, the Life and Light. God, the Light and Life of Men.
12. Were not the sinful Mary's tears? Lent.
Of these hymns No. 11 has attained the greatest popularity.