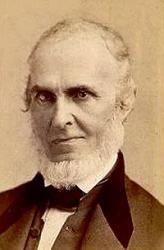 Whittier, John Greenleaf, the American Quaker poet, was born at Haverhill, Massachusetts, Dec. 17, 1807. He began life as a farm-boy and shoemaker, and subsequently became a successful journalist, editor and poet. In 1828 he became editor of the American Manufacturer (Boston), in 1830 of the New England Review, and an 1836 (on becoming Secretary to the American Anti-Slavery Society) of the Pennsylvania Freeman. He was also for some time, beginning with 1847, the corresponding editor of the National Era. In 1840 he removed to Amesbury, Massachusetts, where most of his later works have been written. At the present time [1890] he lives alternately at Amesbury and Boston. His first poetical piece was printed in the Newburyport Free Press in 1824. Since then his publications have been numerous, including:—
Voices of Freedom, 1833; Songs of Labour, and other Poems, 1850; Ballads and other Poems, London, 1844; The Panorama, and other Poems, 1856; In War Time, 1863; Occasional Poems, 1865; Poetical Works, 1869; Complete Poetical Works, 1876; The Bay of the Seven Islands, and other Poems, 1883, &c.

Notwithstanding this extensive use of portions of Mr. Whittier's poems as hymns for congregational use, he modestly says concerning himself: "I am really not a hymn-writer, for the good reason that I know nothing of music. Only a very few of my pieces were written for singing. A good hymn is the best use to which poetry can be devoted, but I do not claim that I have succeeded in composing one." (Author's MS.) We must add, however, that these pieces are characterized by rich poetic beauty, sweet tenderness, and deep sympathy with human kind.