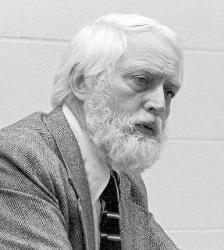 Pseudonym: Sietze Buning
**********
Stanley Marvin Wiersma (b. Orange City, IA, 1930; d. Amsterdam, the Netherlands, 1986) was a poet and professor of English at Calvin College, Grand Rapids, Michigan, from 1959 until his sudden death in 1986. He attended Calvin as an under­graduate and received a Ph.D. from the University of Wisconsin in 1959. His love for the Genevan psalms is reflected in the two books of poetry for which he is most widely known: Purpaleanie and Other Permutations (1978) and Style and Class (1982), both written under the pseudonym Sietze Buning. He also wrote More Than the Ear Discovers: God in the Plays of Christopher Fry and translated many Dutch poems and hymn texts into English, including the children's hymns published in All Will Be New (1982).