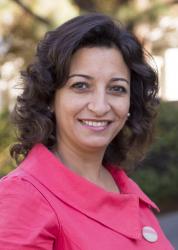 Anne Zaki was born in Cairo, Egypt, where her father was a pastor. At age 16 she was selected by the Egyptian government to represent her homeland in an international school in Western Canada, dedicated to peace and international understanding. After graduation she attended Calvin College, where she learned to integrate her faith and her dedication to social justice. Following her graduation with a BA in psychology and sociology in 1999, Zaki married Naji Umran, a Canadian-Syrian student at Calvin Theological Seminary, and they had four boys: Jonathan, Sebastian, Emmanuel, and Alexander. Zaki also earned two master's degrees, one in social psychology from the American University in Cairo in 2002, and one in divinity from Calvin Theological Seminary in 2009. She is currently pursuing a PhD in preaching at Fuller Theological Seminary. She worked as a research and development specialist for global worship for the Calvin Institute of Christian Worship from 2003 – 2013, developing global worship resources and organizing global worship conferences worldwide. Ever since, she's been cultivating a global perspective on life and faith by speaking at mission gatherings like Missio Nexus, the Global Consultation on Music and Missions (GCoMM), the Lausanne Movement's Younger Leaders Gathering (YLG), and Urbana 18. After pastoring churches in Michigan and British Columbia, the couple fulfilled their dream of returning to Egypt to live and serve in September 2011, nine months after the Arab Spring. Anne currently teaches at the Evangelical Presbyterian Seminary in Cairo, Egypt, courses on Preaching, Worship, Spiritual Formation, Psychology, and Communication.