A mighty fortress is our God, A bulwark never failing

1 A mighty fortress is our God,
a bulwark never failing;
our helper he, amid the flood
of mortal ills prevailing.
For still our ancient foe
does seek to work us woe;
his craft and power are great,
and armed with cruel hate,
on earth is not his equal.


2 Did we in our own strength confide,
our striving would be losing,
were not the right Man on our side,
the Man of God's own choosing.
You ask who that may be?
Christ Jesus, it is he;
Lord Sabaoth his name,
from age to age the same;
and he must win the battle.


3 And though this world, with devils filled,
should threaten to undo us,
we will not fear, for God has willed
his truth to triumph through us.
The prince of darkness grim,
we tremble not for him;
his rage we can endure,
for lo! his doom is sure;
one little word shall fell him.


4 That Word above all earthly powers
no thanks to them abideth;
the Spirit and the gifts are ours
through him who with us sideth.
Let goods and kindred go,
this mortal life also;
the body they may kill:
God's truth abideth still;
his kingdom is forever! 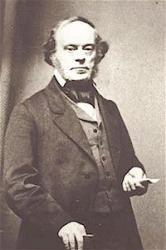 Hedge, Frederick Henry, D.D., son of Professor Hedge of Harvard College, was born at Cambridge, Massachusetts, 1805, and educated in Germany and at Harvard. In 1829 he became pastor of the Unitarian Church, West Cambridge. In 1835 he removed to Bangor, Maine; in 1850 to Providence, and in 1856 to Brookline, Mass. He was appointed in 1857, Professor of Ecclesiastical History at Cambridge (U.S.), and in 1872, Professor of German Literature at Harvard. Dr. Hedge is one of the editors of the Christian Examiner, and the author of The Prose Writers of Germany, and other works. In 1853 he edited, with Dr. F. D. Huntington, the Unitarian Hymns for the Church of Christ, Boston Crosby, Nichols & Co. To that collection and the supplement (1853) he con… Go to person page >
^ top

See PHH 468 for a brief history of the original text and tune. This English translation of Luther's German text is by Frederick H. Hedge (b. Cambridge, MA, 1805; d. Cambridge, 1890); it was published in Furness's Gems of German Verse (1852) and in Hymns for the Church of Christ (1853), a hymnal edited by Hedge and Frederick Huntington. Hedge's translation, which closely follows Luther's words, is the one usually found in North American hymnals.

Hedge was a precocious child who read Latin and Greek classics at an early age. Between the ages of twelve and sixteen he was in Germany, where he studied German literature. Educated at Harvard University and Divinity School, he became a Unitarian minister in 1829. Hedge served congregations in Maine, Rhode Island, and Massachusetts, and taught church history at Harvard Divinity School (1857-1876) and German literature at Harvard University (1872-1884). A respected transcendentalist and a famous German scholar, he published the monumental Prose Writers of Germany 0848). His original hymns and translations were published in Hymns for the Church of Christ (1853), which he compiled with F. Dan Huntington. He is remembered primarily for his translation of Luther's famous hymn.

Stanzas 1-3 of the original text were inspired by Psalm 46; stanza 4 arose directly from Luther's persecution experience. The text expresses trust in God's protection amidst the battle that Christians wage against the devil. "Earthly powers" in stanza four undoubtedly referred to the Roman Catholic authorities of Luther's day, but modern Christians may identity other "powers" that oppose the rule of Christ. The closing line of the text provides much comfort: "God's truth abideth still; his kingdom is forever!"

All tunes published with 'A Mighty Fortress'^ top

This hymn is often referred to as “the battle hymn” of the Reformation. Many stories have been relayed about its use. Albert Bailey writes, “It was, as Heine said, the Marseillaise of the Reformation…It was sung in the streets…It was sung by poor Protestant emigres on their way to exile, and by martyrs at their death…Gustavus Adolphus ordered it sung by his army before the battle of Leipzig in 1631…Again it was the battle hymn of his army at Lutzen in 1632…It has had a part in countless celebrations commemorating the men and events of the Reformation; and its first line is engraved on the base of Luther’s monument at Wittenberg…An imperishable hymn! Not polished and artistically wrought but rugged and strong like Luther himself, whose very words seem like deeds” (The Gospel in Hymns, 316). As you can see, this is a hymn close to the hearts of Protestants and Lutherans, a source of assurance in times of duress and persecution. The text is not restricted, however, to times of actual physical battles. In any time of need, when we do battle with the forces of evil, God is our fortress to hide us and protect us, and the Word that endures forever will fight for us.

Luther wrote this text sometime between 1527 and 1529 as a paraphrase of Psalm 46, though stanza four comes directly from Luther’s own persecution experience. The most commonly used English version is a translation by Frederick H. Hedge in 1853. The text is full of battle imagery; this, coupled with the historic use of the hymn in actual battles, can be troubling for Christians who struggle with making sense of warfare. There is a case for arguing that we need to see this hymn in light of the history in which it was written, when Christians were fighting to defend their faith. However, this text also needs to be understood in terms of a spiritual struggle against the powers of darkness. Whether we believe in very real, physical demons and tempters, or less concrete forces, we are in the midst of a very real war between good and evil. That sounds very dramatic and almost cliché, but it is important to remember. Luther reminds us that we can’t simply sit back and watch as horrible things unfold in our world, but that we must join the battle, knowing that God is on our side, and that we fight for a side that has, in a sense, already won.

This tune of Luther’s EIN FESTE BURG, was, like most tunes written around the time, originally scored in rhythmic form, which can be found in Psalter Hymnal 468. This rhythmic form, as described by Paul Westermeyer, was “a secure and jubilant textual dance that trips up the foe.” Westermeyer goes on to describe the isometric version we’re all used to as “a partisan battle cry that mistakenly turned Luther’s energetic paradox (a fortress moves and fights for us) into immobile stasis” (Let the People Sing, 59). The solid and majestic rhythm we sing today definitely exemplifies the theme of “fortress,” but misses this paradox as Westermeyer describes it. A fighting fortress must be agile, and, as Calvin Seerveld writes, “If we can reinstate the original rhythm and spirited lilt of Luther’s stirring song, maybe we can also bestir ourselves today to hear and sing the song Luther gave us, not just in its dogmatic strength, but with the charismatic faith vitality he gave it” (“Getting into Martin Luther’s Groove,” reformedworship.com).

Seerveld suggests having a choir perform the rhythmic setting first, since it will most likely seem very foreign to your congregation. Another option is to use the isometric structure, but swing the quarter notes, dotting every first and third beat.

Because of the hymn’s close connection to the Reformation, it is one of the favorites to be sung on Reformation Day. However, since the subject matter is much broader than any one historic event, it can be sung any time during the year when a hymn of assurance is needed.

Worship in Song: A Friends Hymnal #239 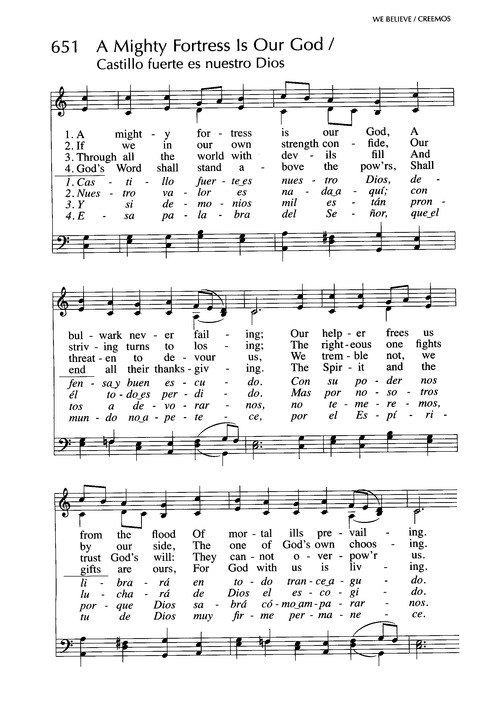 Hymns for a Pilgrim People #382

Hymns of the Christian Life #11

Sacred Selections for the Church #216

The Hymnal for Worship and Celebration #26

The Song Book of the Salvation Army #1