Angels From the Realms of Glory

Angels from the realms of glory, Wing your flight o'er all the earth

1 Angels from the realms of glory,
wing your flight o'er all the earth;
ye who sang creation's story
now proclaim Messiah's birth:


2 Shepherds, in the field abiding,
watching o'er your flocks by night,
God with us is now residing;
yonder shines the infant light: [Refrain]

A writer of many Christian hymns, James Montgomery (PHH 72) composed this Christmas and Epiphany text and published it on Christmas Eve, 1816, in the Sheffield Iris, a newspaper he edited. Montgomery based the text in part on the French carol "Angels We Have Heard on High" (347); it was sung to that tune for over fifty years. Entitling it "Good Tidings of Great Joy to All People," Montgomery republished the text with small alterations in his Christian Psalmist (1825).

Perhaps because he knew the psalms so well, Montgomery expresses a cosmic sense in this text: he reaches from Christ's incarnation to the final great day. The text successively incorporates all creatures–the angels (st. 1), the shepherds (st. 2), the wise men (st. 3), all nations (st. 4), and all people (st. 5)–in the call to “come and worship Christ, the newborn King!”

The text was originally in five stanzas, although many hymnals now delete the fifth stanza. Stanzas 1-3 are from Montgomery's text, which was inspired by the Christmas stories in Luke 2 and Matthew 2. Stanza 4 comes from another Montgomery carol inspired by Philippians 2. Stanza 5 is a doxology (not written by Montgomery) from the Salisbury Hymn Book (1857).

Liturgical Use:
Christmas Day worship service; during the Christmas season and Epiphany (not only for the Christmas story, but also for the hymn's obvious mission focus in stanza 4).

--Psalter Hymnal Handbook
=====================
Angels from the realms of glory. J. Montgomery. [Christmas.] This hymn, which ranks as one of the most popular of the author's compositions, first appeared in his Iris newspaper [Sheffield], Dec. 24, 1816, in 5 stanzas of 6 lines, and entitled "Nativity." In the 8th edition of Cotterill's Selection, 1819, it was repeated without alteration, and again in the 9th ed., 1820. On its republication by Montgomery in his Christian Psalmist, 1825, No. 487, the title was, "Good tidings of great joy to all people," and the following changes were introduced:—

These changes (together with the new title) were retained in his Original Hymns, 1853, No. 239; and must be regarded as the authorised text. By many compilers the closing stanza:—

has been, in some instances, omitted, and in others a doxology has been substituted. That given in A Hymn Book for the Services of the Church, &c, by the Rev. Isaac Gregory Smith, 1855, reads:—

Another found in the Salisbury Hymn Book, 1857, and others, including the Society for Promoting Christian Knowledge Church Hymns and Thring's Collection is:—

"Saints and angels join in praising
Thee; the Father, Spirit, Son!
Evermore their voices raising
To the eternal Three in One.
Come ye, worship;
Worship Christ, the new-born King."

Of the first four stanzas a rendering into Latin:—“Angeli, sancta regione lucis," by the Rev. R. Bingham, appeared in his Hymnologia Christiana Latina, 1871, pp. 79-81.
The use of this hymn in various forms in English-speaking countries is extensive, abbreviations being the rule. Amongst American Hymnals, the Hymns of the Church, 1869, and the Baptist Praise Book, 1871, give the full revised and authorised text of 1825 and 1853.

All tunes published with 'Angels From the Realms of Glory'^ top

This hymn focuses on each of the key players in the Christmas story, calling them from wherever they are to “Come and worship Christ, the newborn King.” The angels were called from all over the earth, and the wise men from afar, while the shepherds were almost next door. As the hymn is sung, think about where you are coming from as you come to worship.

James Montgomery wrote this text in 1816 and published it on Christmas Eve in the Sheffield Iris, a newspaper of which he was editor. He later published it in his hymn book The Christian Psalmist in 1825 under the title “Good tidings of great joy to all people.”

The hymn originally had five stanzas, but only the first four are usually sung today. Each of these stanzas calls on a part of creation to “come and worship.” The first three – angels, shepherds, and sages (wise men) – are key players in the Christmas narratives found in Luke 2 and Matthew 2. In the third stanza, there are two words which are somewhat out of date, and are occasionally edited: the very first word, “Sages,” and “natal” in the fourth line. In the fourth stanza, “Saints” refers to Simeon and Anna, who had been “watching long in hope” for the Messiah to come. The fifth, which is usually omitted due to its gloomy beginning, is addressed to “Sinners, wrung with true repentance,” announcing that redemption has come.

Two other stanzas are occasionally added. One is from another Montgomery hymn based on Philippians 2; it begins “Though an infant now we view Him.” The other is a doxological stanza from the Salisbury Hymn Book of 1857, which begins “All creation, join in praising.”

In the United States, this hymn is sung almost exclusively to REGENT SQUARE. That tune was composed in 1867 by Henry T. Smart for Horatius Bonar's doxology, “Glory be to God the Father.” The tune's name comes from Regent Square in London, the location of St. Philip's Presbyterian Church. Its minister, James Hamilton, was text editor of Psalms and Hymns for Divine Worship of 1867, where the tune was first published.

In Britain, this hymn is better known with GLORIA, the French carol tune associated with “Angels We Have Heard on High.” It is often called IRIS, after the newspaper in which Montgomery first published the text.

This hymn is suitable for Christmas and Epiphany (see stanza 3), especially as an opening hymn. A choral setting that could be used as a musical call to worship, “Angels from the Realms of Glory,” is set to REGENT SQUARE, except for one stanza that is sung to LAUDA ANIMA, with accompaniment by organ and optional brass. A grand arrangement for congregational accompaniment is found in “Five Carol Accompaniments for Brass Quartet and Organ,” which includes optional handbells and timpani. For use as a prelude, try a short organ setting such as the one in “Angels and Alleluias,” or a piano arrangement, as in the collection “Gloria.”

The Book of Common Praise: being the hymn book of The Church of England in Canada (revised 1938) #81b 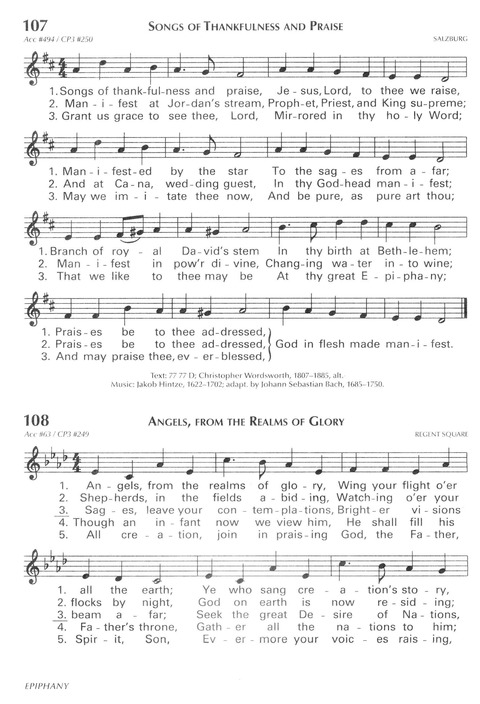 Hymns and Psalms #92a

Hymns and Psalms #92b

Hymns for a Pilgrim People #125

Hymns of the Christian Life #63

Display Title: Angels from the Realms of Glory First Line: Angels from the realms of glory Tune Title: REGENT SQUARE Author: James Montgomery Source: Montgomery's Sheffield newspaper, the Iris, Christmas Eve, 1816. It was republished in the Christian Psalmist, 1825. Stanza 5 is from The Christmas Box, 1825.
The Cyber Hymnal #44

The Hymnal for Worship and Celebration #131

The Song Book of the Salvation Army #75