It Came Upon the Midnight Clear

It came upon the midnight clear

1 It came upon the midnight clear,
that glorious song of old,
from angels bending near the earth
to touch their harps of gold:
"Peace on the earth, good will to men,
from heaven's all-gracious King."
The world in solemn stillness lay,
to hear the angels sing.


2 Still through the cloven skies they come
with peaceful wings unfurled,
and still their heavenly music floats
o'er all the weary world;
above its sad and lowly plains,
they bend on hovering wing,
and ever o'er its Babel sounds
the blessed angels sing.


3 And ye, beneath life's crushing load,
whose forms are bending low,
who toil along the climbing way
with painful steps and slow,
look now! for glad and golden hours
come swiftly on the wing.
O rest beside the weary road,
and hear the angels sing!


4 For lo! the days are hastening on,
by prophet seen of old,
when with the ever-circling years
shall come the time foretold
when peace shall over all the earth
its ancient splendors fling,
and the whole world send back the song
which now the angels sing. 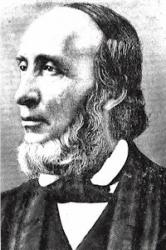 Edmund Hamilton Sears was born in Berkshire [County], Massachusetts, in 1810; graduated at Union College, Schenectady, in 1834, and at the Theological School of Harvard University, in 1837. He became pastor of the Unitarian Society in Wayland, Mass., in 1838; removed to Lancaster in 1840; but on account of ill health was obliged to retire from the active duties of the ministry in 1847; since then, residing in Wayland, he devoted himself to literature. He has published several works. --Annotations of the Hymnal, Charles Hutchins, M.A., 1872… Go to person page >
^ top

The tune NOEL (also used at 185) is also known as EARDISLEY or GERARD. Arthur Seymour Sullivan (b Lambeth, London. England. 1842; d. Westminster, London, 1900) adapted this traditional English melody (probably one of the variants of the folk song "Dives and Lazarus"), added phrases of his own to rec…

All tunes published with 'It Came Upon the Midnight Clear'^ top

One theme of this hymn is the contrast between the message “peace on earth, good will toward men” proclaimed by the host of angels at Christ's birth (Luke 2:14) and the war and oppression that dominate the earth. As this hymn is sung, think about the coming time when God will make all things new and bring His peace.

Edmund H. Sears, a Unitarian minister at Wayland, Massachusetts, wrote this hymn in 1849. It was published that year a few days after Christmas in the Boston Christian Register. While obviously a Christmas hymn due to its theme of the angels' song, there is no mention at all of Christ or His birth about which the angels sang; it is a social gospel hymn. Perhaps this is due to the theological leanings of its author, even though Sears believed in the divinity of Christ, contrary to most Unitarians. Written only a dozen years before the outbreak of the American Civil War, the peaceable leanings of the Unitarian school of thought are evident in the text.

Originally written in five stanzas, this hymn is usually published with four. The third stanza (beginning “Yet with the woes”) is most commonly omitted, and the fourth (beginning “And ye, beneath life's crushing load”) is next most common. The first and second stanzas (“It came upon the midnight clear” and “Still through the cloven skies they come”) describe the coming of the angels and their song. The third condemns war, and the fourth commiserates with those in bondage and trial. The fifth stanza (“For lo! the days are hastening on”) describes a future time of peace.

CAROL is the most common tune to which this hymn is sung. It comes from the twenty-third study in Church Chorals and Choir Studies of 1850 by Richard Willis. The composer later arranged the tune into its present form for the Christmas text “While Shepherds Watched Their Flocks.” CAROL was first paired with “It Came Upon a Midnight Clear” in 1878.

This tune may be sung in harmony, or in unison. The accompaniment should be legato, and an additional instrument such as a flute or violin would work well.

This hymn is suitable for the Christmas season. Such a well-known hymn can be used in a variety of ways. Settings of CAROL suitable for prelude, offertory, or postlude can be found in collections such as “Christmas Comes Again, Set 2” for organ or “Christmas Carols at the Piano.” A flexible medley for four-hands piano with three other well-known carols is part of “A Season of Joy.” “The Midnight Clear” is a setting of Sears's text to original music by Joel Raney suitable for a choral anthem. The accompaniment can be expanded beyond the flowing piano part with parts for optional flute, oboe, cello, and handbells. The collection “Tis the Season” contains a descant and congregational setting of this hymn. Another congregational setting of “It Came Upon the Midnight Clear” includes a trumpet descant. 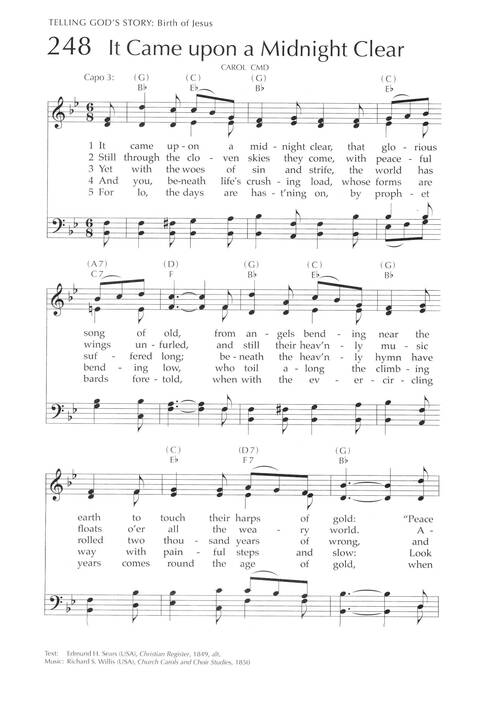 A New Hymnal for Colleges and Schools #229

A New Hymnal for Colleges and Schools #230

Great Songs of the Church (Revised) #195

Hymns for a Pilgrim People #128

Hymns of the Christian Life #70

The Hymnal for Worship and Celebration #128

The Song Book of the Salvation Army #83