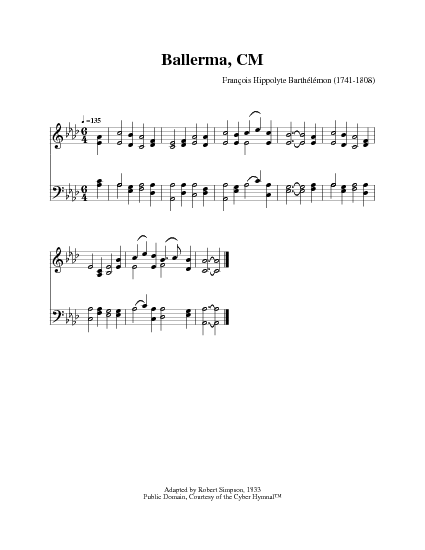 Approach, my soul, the mercy seat

1 Approach, my soul, the mercy seat
where Jesus answers prayer;
there humbly fall before his feet,
for none can perish there.


2 Thy promise is my only plea;
with this I venture nigh:
thou callest burdened souls to thee,
and such, O Lord, am I.


3 Bowed down beneath a load of sin,
by Satan sorely pressed,
by war without and fears within,
I come to thee for rest.


4 Be thou my shield and hiding place,
that, sheltered near thy side,
I may my fierce accuser face,
and tell him thou hast died.


5 O wondrous love! to bleed and die,
to bear the cross and shame,
that guilty sinners, such as I,
might plead thy gracious name!

Approach, my soul, the mercy seat. J. Newton. [Lent.] First published in the Olney Hymns, 1779, Bk. iii., No. 12, in 6 stanzas of 4 lines, and again in all later editions of the same work. It came into early use in the hymnals and has attained to a foremost position as one of the most popular of Newton's productions. In the Olney Hymns it is the second of two hymns headed, "The Effort." The first hymn by Newton on this same subject begins:— "Cheer up, my soul, there is a mercy seat." No. 11, in 6 stanzas of 4 lines as above. Its similarity to "Approach, my soul," has led some to suppose it to have been re-written by an unknown compiler. In the American College Hymnal, N. Y. 1876, stanzas ii., iii. and iv. are given as No. 280, "Lord, I am come, Thy promise is my plea." The use of this hymn in any form is very limited.

All tunes published with 'Pleading His Gracious Name'^ top 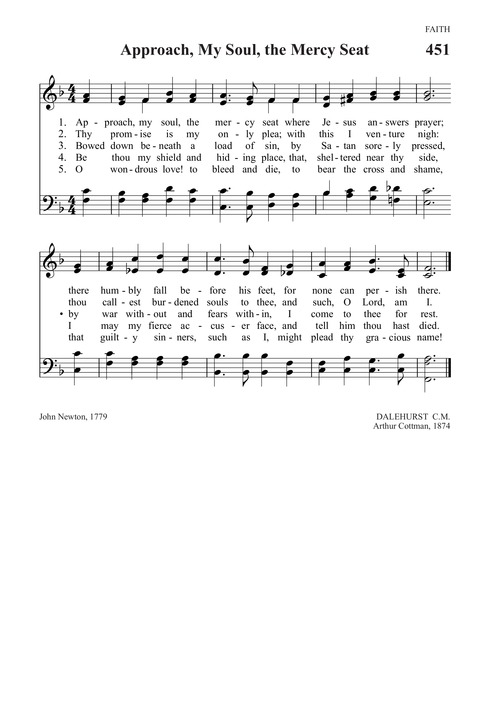 Hymns of the Christian Life #206

The Song Book of the Salvation Army #284