Jesus, lover of my soul, Let me to thy bosom fly

1 Jesus, lover of my soul,
let me to thy bosom fly,
while the nearer waters roll,
while the tempest still is high;
hide me, O my Savior, hide,
till the storm of life is past;
safe into the haven guide,
O receive my soul at last!


2 Other refuge have I none;
hangs my helpless soul on thee;
leave, ah! leave me not alone,
still support and comfort me.
All my trust on thee is stayed,
all my help from thee I bring;
cover my defenseless head
with the shadow of thy wing.


3 Plenteous grace with thee is found,
grace to cover all my sin;
let the healing streams abound;
make and keep me pure within.
Thou of life the fountain art;
freely let me take of thee;
spring thou up within my heart,
rise to all eternity.

All tunes published with 'Jesus, Lover of My Soul'^ top

Originally published under the title “In Temptation,” this hymn has as its theme the sufficiency of Christ to give comfort, power, and grace in any circumstance. It is a plea that Jesus will provide sanctuary to the tempted (st. 1), because there is no other refuge (st. 2). Christ is declared to be the sole desire of the Christian, who is undeserving (st. 3), while Christ's grace is declared sufficient to cleanse the Christian from all his vile sins (st. 4).

Charles Wesley was converted in 1738, and wrote this hymn shortly thereafter; it was published under the title “In Temptation” in 1740 by the Wesley brothers in Hymns and Sacred Poems. John Wesley did not publish it in his later hymnals, perhaps because its language was too pietistic and too intimate for public worship, concerns which other hymnal editors have shared; but this is only speculation. Nevertheless, it has survived and remains well-known.

This hymn originally had five stanzas, but one (“Wilt Thou not regard my call?”) is never sung. It is typically sung in four stanzas, although sometimes the third (“Thou, O Christ, art all I want”) is omitted. The title and first line of the hymn, “Jesus, Lover of My Soul,” is a phrase that is probably not original to Wesley, but may have come from an apocryphal wisdom book, the Wisdom of Solomon, or a Christian classic, Thomas à Kempis's Imitation of Christ.

There are two tunes that are commonly associated with this text. One is the Welsh tune ABERYSTWYTH by Joseph Parry, written in 1876 and named after the coastal town he was living in at the time. He published it in Ail Llyfr Tonau ac Emynau (The Second Book of Tunes and Hymns) in 1879. It is paired with many different texts, but “Jesus, Lover of My Soul” is by far the most frequent. ABERYSTWYTH should be sung in harmony at a moderate tempo that allows the many eighth notes in the lower voices to be heard.

MARTYN is sung almost exclusively with Wesley's text. Simeon B. Marsh is the composer. In 1834, he was making his weekly round of singing schools between Amsterdam and Johnston, New York, when he wrote this tune, intending for it to be sung with John Newton's hymn “Mary to her Savior's tomb.” It was published in 1836 with Newton's text in Thomas Hastings's Musical Miscellany, vol. I. MARTYN was first paired with “Jesus, Lover of My Soul” in 1851 in Darius Jones's Temple Melodies. Sing this tune with even rhythm and firm accompaniment.

Wesley intended this hymn to be sung in times of temptation, so it would work well in a service with preaching on that topic. This hymn is also sung for services where the theme is a story with overwhelming water, such as the Israelites crossing the Red Sea, or Peter walking on the water. It would work well as a choral anthem preceding or following the sermon. A modern arrangement of MARTYN is featured in “Jesus, Lover of My Soul” for choir and piano. A choral anthem based on the tune ABERYSTWYTH and the text “Jesus, Lover of My Soul” emphasizes the choir with a simple piano accompaniment with triplet figures. This same setting is rearranged for a low solo voice in “Three Hymns of Hope.”

The New Praiseworthy: for the Church and Sunday School #227 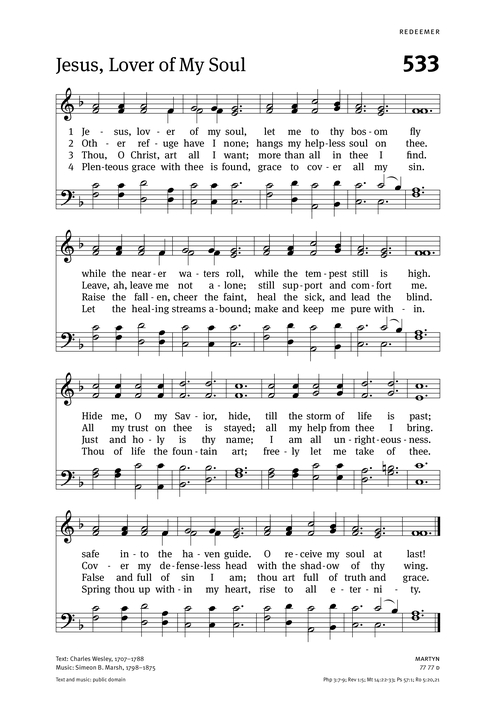 Ancient and Modern #128a

Ancient and Modern #128b

Great Songs of the Church (Revised) #276

Great Songs of the Church (Revised) #278

Hymns for a Pilgrim People #380

Hymns of Glory, Songs of Praise #490a

Hymns of Glory, Songs of Praise #490b

Hymns of the Christian Life #301

Lift Every Voice and Sing II #79

Sacred Selections for the Church #258

Sacred Selections for the Church #259