Blessed Jesus, at Thy word

Blessed Jesus, at Thy word

1 Blessed Jesus, at your word
we are gathered all to hear you.
Let our hearts and souls be stirred
now to seek and love and fear you.
By your gospel pure and holy,
teach us, Lord, to love you solely.


2 All our knowledge, sense, and sight
lie in deepest darkness shrouded,
till your Spirit breaks our night
with your beams of truth unclouded.
You alone to God can win us;
you must work all good within us.


3 Glorious Lord, yourself impart;
Light of Light, from God proceeding,
open lips and ears and heart;
help us by your Spirit's leading.
Hear the cry your church now raises;
Lord, accept our prayers and praises.

Clausnitzer, Tobias, born at Thum, near Annaberg, in Saxony, probably on Feb. 5,1619. After studying at various Universities, and finally at Leipzig (where he graduated M.A. in 1643), he was appointed, in 1644, chaplain to a Swedish regiment. In that capacity he preached the thanksgiving sermon in St. Thomas's Church, Leipzig, on "Reminiscere" Sunday, 1645 (ii. Sunday in Lent) on the accession of Christina as Queen of Sweden; as also the thanksgiving sermon at the field service held by command of General Wrangel, at Weiden, in the Upper Palatine, on January 1, 1649, after the conclusion of the Peace of Westphalia. In 1649 he was appointed first pastor at Weiden, and remained there (being also appointed later a member of the Consistory, and… Go to person page >
^ top

Essentially a prayer asking for illumination by the Holy Spirit as the Christian community gathers around the Lord's Word, "Blessed Jesus" is a pre-sermon hymn by Tobias Clausnitzer (b. Thum, Saxony, Germany, 1619; d. Weiden, Upper Palatine, Germany, 1684). It was first published in the Altdorffisches Gesang-Buchlein (1663) and first attributed to Clausnitzer in the Nüremberg, Germany, Gesangbuch (1676). Catherine Winkworth (PHH 194) translated the text and published it in English in her Lyra Germanica (2nd series, 1858).

Clausnitzer graduated from the University of Leipzig and became a chaplain in the Swedish army. He preached two sermons at memorable occasions: when Queen Christina ascended the Swedish throne in 1645 and when the Peace of Westphalia, which ended the Thirty Years War, was celebrated in 1648. Clausnitzer became a pastor in Weiden in 1648, where he remained until his death. In addition to "Blessed Jesus, at Your Word," his creedal hymn, “We Believe in One True God,” is found in many modern hymnals.

Liturgical Use:
As a sung prayer for illumination prior to the reading or preaching of the Word.

All tunes published with 'Blessed Jesus, at Thy word'^ top

In this hymn, we acknowledge our need for the illumination of the Holy Spirit to fully understand God’s message to us. We also recognize and claim the promise of Christ concerning this help: “But the Helper, the Holy Spirit, whom the Father will send in my name, he will teach you all things and bring to your remembrance all that I have said to you” (John 14:26 ESV).

Tobias Clausnitzer was the author of the original German text. It was first published anonymously in 1663 in the Altdorffisches Gesang-Büchlein, but was credited to Clausnitzer in the 1671 edition. The most common English translation is by Catherine Winkworth, which appeared in the second series of her Lyra Germanica in 1858 as “Blessed Jesus, at Thy Word.”

This hymn originally had three stanzas. The first stanza is a petition for a heart that is receptive to hearing the Word of God proclaimed. The second is a declaration of the need for such a work of God in human hearts, and the third is a statement of praise to Christ and a repetition of the plea of the first stanza. In some hymnals, an anonymous doxological stanza is added as the fourth.

The German chorale tune LIEBSTER JESU (also called DESSAU) was composed by Johann R. Ahle for an Advent hymn and first published by him in 1664. In its original form, the tune was florid and soloistic in nature, but it was revised for congregational singing and paired with Clausnitzer’s text in the late seventeenth century. The tune was named after this text. (The opening line of the German is “Liebster Jesu, wir sind hier.”)

This hymn was written to be sung before the sermon as a prayer for illumination. Two of the stanzas contain allusions to other parts of the liturgy. The first is more apparent in the German text but does not come across well in the translation of the final lines of the first stanza, which refer to an opening liturgy for a Eucharistic service, “Lift up your hearts. We lift them up to the Lord.” The other is a brief line from the Nicene Creed in the third stanza, “Light of Light, from God proceeding.” LIEBSTER JESU may be used for instrumental music early in the service. The organist could play a setting such as one by Bach, which is found in “Music for a Celebration, Set 2.” Or a brass quintet could play “Blessed Jesus, at Your Word” as a prelude. 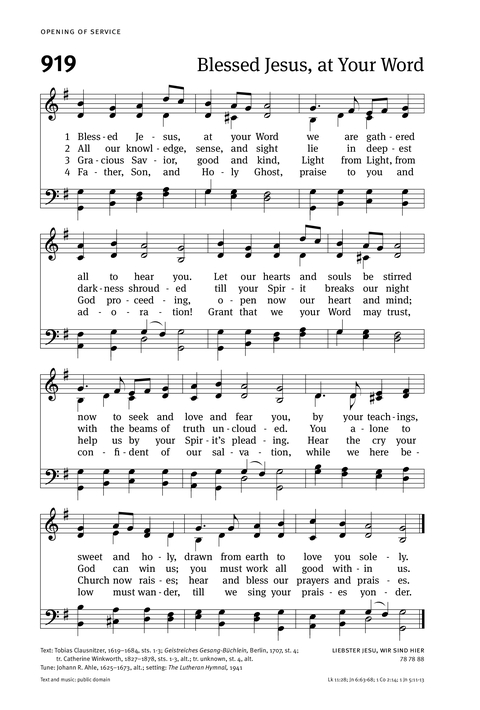 Great Songs of the Church (Revised) #25

With Heart and Voice #60