By Grace I Am an Heir of Heaven

By grace I am an heir of heaven

1 By grace I am an heir of heaven:
why doubt this, O my trembling heart?
If what the Scriptures promise clearly
is true and firm in ev'ry part,
this also must be truth divine:
by grace a crown of life is mine.


2 By grace alone shall I inherit
that blissful home beyond the skies.
Works count for naught, the Lord incarnate
has won for me the heav'nly prize.
Salvation by his death he wrought,
his grace alone my pardon bought.


3 By grace! These precious words remember
when sorely by your sins oppressed,
when Satan comes to vex your spirit,
when troubled conscience sighs for rest;
what reason cannot comprehend,
God does to you by grace extend.


4 By grace! Be this in death my comfort;
despite my fears, 'tis well with me.
I know my sin in all its greatness,
but also him who sets me free.
My heart to naught but joy gives place,
since I am saved by grace, by grace.

Johann Balthaser König (b. Waltershausen, near Gotha, Germany, 1691; d. Frankfurt, Germany, 1758) composed this tune, which later became associated with Johann Mentzer's hymn "O dass ich tausend Zungen hätte" (Oh, That I Had a Thousand Voices). The harmonization is from the Wurttembergische Choral… 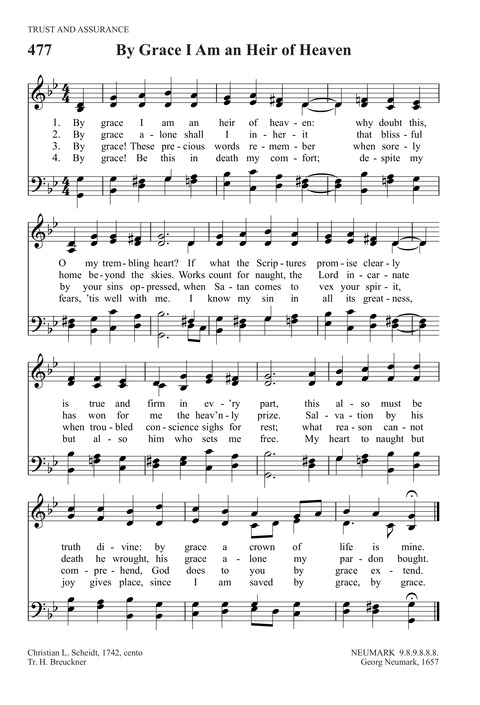