O That I Had a Thousand Voices

Johann Balthaser König (b. Waltershausen, near Gotha, Germany, 1691; d. Frankfurt, Germany, 1758) composed this tune, which later became associated with Johann Mentzer's hymn "O dass ich tausend Zungen hätte" (Oh, That I Had a Thousand Voices). The harmonization is from the Wurttembergische Choralbuch (1653).

Music of that time was not notated with bar lines every three or four beats; here a "quarter bar" marks the division between the two sections of the first longer phrase, and a full bar line delineates the other phrases. Like many of the German chorales, this tune is in bar form (AAB) and may be sung in four-part harmony. The tune begins on an upbeat, with the first accent on the second note.

A chorister in the Kapella of Frankfurt at a young age, König was a student of the famous Georg Philipp Telemann, who later became godfather to König's son. He succeeded Telemann as director of municipal music and became director of music at the Barfiisserkirche and at St. Catherine's Church, all in Frankfurt. In 1727 he also assumed the directorship of the Frankfurt Kapella.

Mainly interested in congregational singing, König presented a document to the Frankfurt city council in which he stated the problems of and solutions for the state of singing in the church.

He edited the largest eighteenth-century German collection of hymns, Harmonischer Lieder-Schatz (1738), which also included O DASS ICH TAUSEND. This collection consisted of over nineteen hundred tunes with figured bass, including the 125 Genevan tunes set to Lobwasser's German translation of John Calvin's psalter. In accord with the style of his day, König "straightened out" (made all quarter notes) the originally lively rhythms of many tunes in this significant hymnal.

Text: Now I Have Found the Firm Foundation

Text: O That I Had a Thousand Voices

Text: This Night a Wondrous Revelation

Text: I Praise the King with All My Verses
^ top 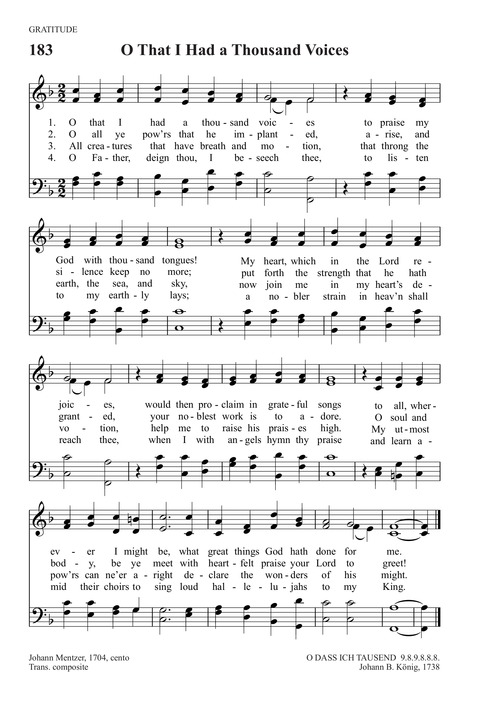