1 Come, ye sinners, poor and needy,
weak and wounded, sick and sore;
Jesus ready stands to save you,
full of pity, love, and power.


3 Let not conscience make you linger,
nor of fitness fondly dream;
all the fitness he requireth
is to feel your need of him.


4 Come, ye weary, heavy laden,
lost and ruined by the fall;
if you tarry till you're better,
you will never come at all.


5 I will rise and go to Jesus!
He will save me from my sin.
By the riches of his merit,
there is joy and life in him.

Come, ye sinners poor and wretched. J. Hart. [Invitation.] First published in his Hymns Composed on Various Subjects, 1759, No. 118, in 7 stanzas of 6 lines, and headed "Come, and welcome, to Jesus Christ." One of the first to adopt it was R. Conyers in his Collection, 1774, with various alterations, and tho omission of stanza iv. Toplady, followed in 1776 with further alterations. Both versions were repeated in some hymnals, and again altered in others, until the altered forms of the hymn number over twenty. Conyers and Toplady are answerable for most of the popular changes in the text. The alterations are too many to enumerate. Original text in Lyra Britannica, 1867, p. 275.

ARISE is an anonymous American folk melody. Set to "Mercy, O Thou Son of David," the tune was published in William Walker's (PHH 44) Southern Harmony (1835) with the title RESTORATION. Its name was changed to ARISE (after the refrain in the ballad about the prodigal son) when it was set to Hart's te…

In 1757, after living a life he described as “carnal and spiritual wickedness, irreligious and profane,” Joseph Hart turned to Christ (Psalter Hymnal Handbook). Two years later, he wrote this famous hymn. Now, having undergone numerous text and tune changes, it still remains a classic hymn of invitation to turn from our sinful ways by the grace of God into the waiting arms of our Savior. The added refrain hearkens back to the story of the prodigal son, who, like Hart, turned from a life of waywardness and folly back to his father’s waiting arms. The hymn is thus an invitation to bring our broken, humbled selves before Christ knowing that he waits for us, and, with the refrain, a response to that call, a declaration that by the grace of God, we will rise up and go to Jesus.

There is most definitely some controversy about the words of this hymn revolving around two major changes in Hart’s original text. This text had seven stanzas composed of six lines. Somewhere down the road, an anonymous editor took out the last two lines of each stanza, creating a version now used in many hymnals. For example, the original text of stanza one read:

“Come ye sinners, poor and wretched, Weak and wounded, sick and sore; Jesus ready stands to save you, Full of pity, love and power; He is able, he is able, He is willing; doubt no more.”

The more common version today has been modified to take out these last two lines. Some believe that without these lines, the hymn takes on a works-righteousness tone (see Matthew Smith’s blog for more). Others believe that God’s activity is implicit in the first four lines, and the last two just reaffirm what was said before (David Hamrick shares his thoughts on his blog). It’s up to you and your tradition which version you choose, but if you want to go with the former, one option for more explicitly acknowledging Christ’s work is to pair it with the contemporary song, “Jesus, All for Jesus,” either as two separate songs or as a medley

The second cause of some disagreement over the text comes from the refrain, first added in 1802, which reads:

“I will arise and go to Jesus, He will embrace me in His arms; In the arms of my dear Savior, O! There are ten thousand charms.”

The added refrain/stanza has caused a bit of a stir because of the last line: “In the arms of my dear Savior, O! There are ten thousand charms.” There is no Biblical reference to “ten thousand charms,” and for many, the word conjures up negative connotations, such as the chanting of a magic spell, an amulet, or an expression believed to have magic power. Word connotations are a valid concern for both worshiper and hymn writer; in this case, there is a positive connotation that should be noted. The Oxford English Dictionary gives a definition for “charm” as “any quality, attribute, trait, feature, etc., which exerts a fascinating or attractive influence, exciting love or admiration.” This use of the word first appears around 1616 in The Merry Wives of Windsor, and so it is very likely that Taylor, writing at the end of the 18th century, was using the word in this way, describing the joy and blessings of being in the Savior’s arms.

These opinions may or may not influence what text you as a worship leader decide to use for your worship, and there are other factors determined by your context and congregation to consider. Regardless of which text you choose, it’s important to know why you are choosing that text. It might happen that someone comes up to you after a service and has an issue with the text or wants to know why something was said, and knowing this history will allow you to answer them. This goes for any song you use – this is just one specific and in depth example.

Once you’ve settled on which text version you’ll use, there are a few options for the tune. Most hymnals use the tune ARISE, an anonymous American folk melody published in Southern Harmony (1835) with the title RESTORATION, and changed to ARISE when set to Hart’s text. One option is Michael Card's traditional Irish inspired version. Another is Fernando Ortega's alternate tune, sung by artists such as Todd Agnew and the Robbie Seay Band. Matthew Smith, for Indelible Grace, composed another tune to the original text, which can be found on the Indelible Grace website.

This hymn works really well both as an opening hymn, calling people into worship, and as a call to a time of confession and assurance. It could also be used in an evangelistic service as an altar call, or after a sermon about Christ’s redeeming work as a response of dedication (it could be quite powerful in this case to sing the refrain first as invitational, and then again as declarative: “Come, arise,” followed by “I will arise,” to show our response to God’s call.) 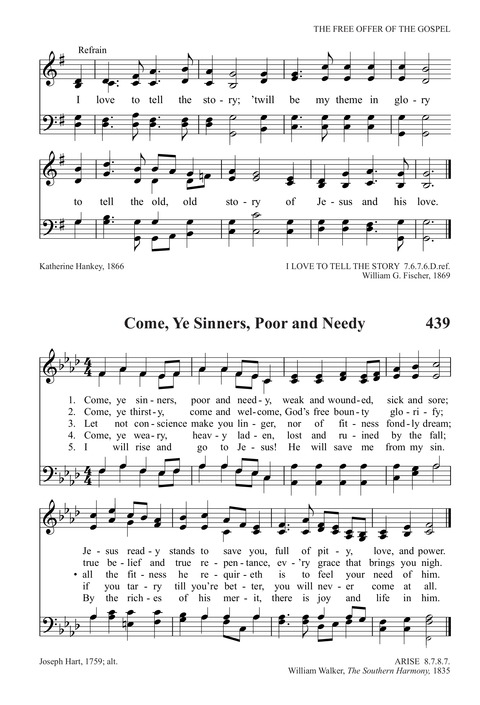 Great Songs of the Church (Revised) #329

Hymns of the Christian Life #555

Hymns to the Living God #75

The Hymnal for Worship and Celebration #334

The Sacred Harp #81a

The United Methodist Hymnal #340b