Day by day, and with each passing moment

1 Day by day and with each passing moment,
strength I find to meet my trials here;
trusting in my Father’s wise bestowment,
I’ve no cause for worry or for fear.
He whose heart is kind beyond all measure
gives unto each day what he deems best--
lovingly, its part of pain and pleasure,
mingling toil with peace and rest.


2 Ev'ry day the Lord himself is near me
with a special mercy for each hour;
all my cares he fain would bear, and cheer me,
he whose name is Counselor and Pow'r.
The protection of his child and treasure
is a charge that on himself he laid;
“As your days, your strength shall be in measure,”
this the pledge to me he made.


3 Help me then in ev'ry tribulation
so to trust your promises, O Lord,
that I lose not faith’s sweet consolation
offered me within your holy Word.
Help me, Lord, when toil and trouble meeting,
e'er to take, as from a father’s hand,
one by one, the days, the moments fleeting,
'til I reach the promised land. 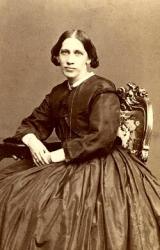 All tunes published with 'Day by Day'^ top

Carolina Sandell wrote this hymn several years after witnessing the sudden drowning of her father, a tragic event that caused her great distress. Having been through that experience, she still could write about God, “He whose heart is kind beyond all measure gives unto each day what he deems best.” In the second stanza, she refers to Deuteronomy 33:25b: “as your days, so shall your strength be” (ESV). As this hymn is sung, remember that, though no human can accurately foretell the future, God knows what will happen and is also in complete control of all coming events.

The Swedish original text of this hymn was written in 1865 by Carolina Sandell, a prolific hymn writer. Though she wrote hymns throughout her life, she was especially productive in the years following the sudden drowning of her father, which she witnessed in 1858. “Day by Day” is one of two hymns for which she is widely known in America; the other is “Children of the Heavenly Father.” Andrew L. Skoog, who was born in Sweden but immigrated to the United States as a boy, translated this hymn into English. Other translations have been made, but Skoog's is by far the most popular. Each of the three stanzas of this hymn expresses a firm belief that God will take care of the future, and that all the Christian must do is trust in Him and follow Him day by day.

“Day by Day” is always sung to BLOTT EN DAG, which is the tune written for it by Oscar Ahnfelt in 1872. The title comes from the opening words of the Swedish text, “Blott en dag, ett ögonblick i sänder.” Ahnfelt was called the “spiritual troubadour” in his day. He traveled from place to place, singing songs such as this one, accompanying himself on guitar.

BLOTT EN DAG is easy to sing, with the only potential trouble spot being the leap to the high note in the third phrase. Though the tune may be sung in parts, its simplicity is best emphasized by unison singing, perhaps with simple guitar accompaniment.

This hymn of assurance can be used as a congregational hymn for a service on the theme of trust in God. Ahnfelt's peaceful, simple tune is ideal for a plain piano offertory, such as the versions in “Simply Curry” or “Surrender.” 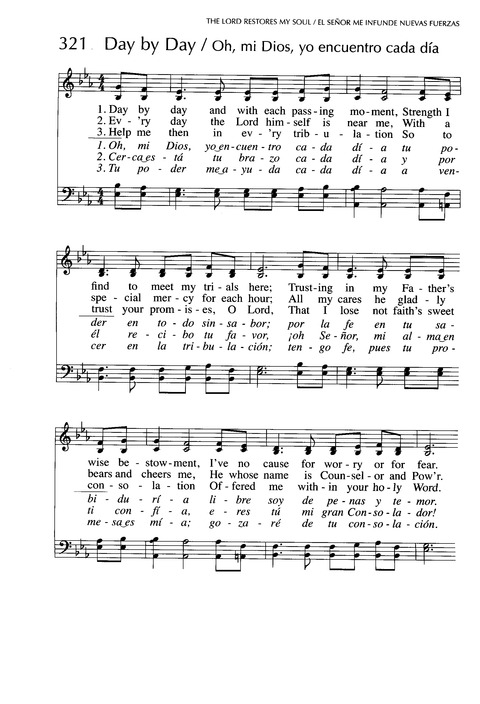 The Hymnal for Worship and Celebration #56