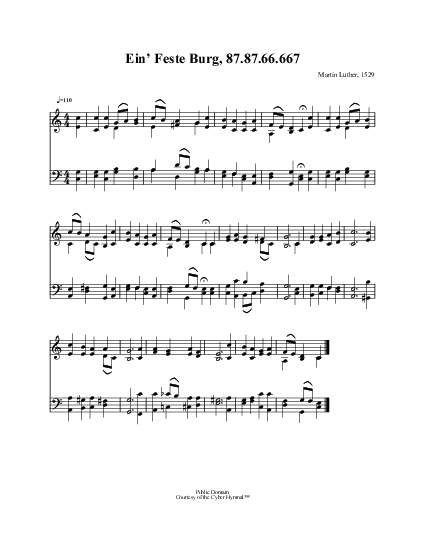 Ein' feste Burg ist unser Gott. Martin Luther. [Psalm xlvi.] The common account of the origin of this, the most famous hymn of Luther, is thus forcibly expressed by Heinrich Heine:—

"A battle hymn was this defiant song, with which he and his comrades entered Worms [April 16, 1521]. The old cathedral trembled at these new notes, and the ravens were startled in their hidden nests in the towers. This hymn, the Marseillaise Hymn of the Reformation, has preserved its potent spell even to our days, and we may yet soon use again in similar conflicts the old mailed words." (Werke, edition 1876, v. iii. p. 36.)

It is, however, in the last degree unlikely that if the hymn had been composed in 1521, it should not have been published in 1524, along with Luther's earlier hymns. A second theory advanced by Dr. K. F. T. Schneider in 1856, that it was written Nov. 1, 1527, and partly suggested by the death of his friend Leonhard Kaiser (burnt at the stake, Aug. 16,1527, at the instigation of the Bishop of Ulm), rests on hypotheses too elaborate to be examined here, but is not sustained by any foundation of fact (see Blätter für Hymnologie, 1883, pp. 75-79; 103-105, &c). A third theory is that it was composed at the time of the Diet of Augsburg in 1530. Thus D'Aubigne says:—

"Luther, full of faith, revived the courage of his friends, by composing and singing with his fine voice that beautiful hymn, since become so famous, Ein’ feste Burg ist unser Gott. Never did soul that knew its own weakness, but which, looking to God, despised every fear, find such noble accents. This hymn was sung during the Diet, not only at Augsburg, but in all the churches of Saxony, and its energetic strains often revived and inspirited the most dejected hearts." (History of Reformation, edition 1847, p. 543).

The hymn, however, belongs to the previous year, 1529, and was probably written for the Diet of Speyer (Spires), when on April 20, 1529, the German Princes made their formal Protest against the revocation of their liberties and thus gained the name of Protestants. Then, says Lauxmann, in Koch, viii. 120, “Luther with this hymn entered a protest before all the German people against endeavouring to obstruct the Gospel." It was first published in Klug's Gesang-Buch, Wittenberg, 1529, entitled "Der xxxxvi. Psalm. Deus noster refugium et virtus." The Psalm is used only as a motto, the imagery throughout being entirely original. We may, however, compare some of the phrases of his prose version, 1524:-

The same text, modernised in orthography, is given in Schircks's edition of Luther's Geistliche Lieder, 1854, p. 35, and as No. 218 in the Unverfälscher Leidersegen, 1851. In stanza i. we see our stronghold and its besiegers; in stanza ii. our weakness, our Saviour's power and might; in stanza iii. the vanity of the Prince of this World; in stanza iv. whatever earthly goods we lose we have our true treasure in heaven.

The hymn speedily spread over all Germany, and Lauxmann, in Koch, viii. 123-131, relates many incidents regarding hymn and chorale—-the true National Hymn of Germany. Luther, in 1530, sang it daily at Coburg. Melanchthon, Jonas, and Cruciger, in their banishment from Wittenberg in 1547, were greatly comforted by hearing it sung by a little maiden on their entrance into Weimar. Gustavus Adolphus caused it to be sung by his whole army before the battle of Leipzig, Sept. 17, 1631, and it was on Sept. 15, 1882, sung "as by one man" by the assembled thousands on the field of Lützen, at the service held in commemoration of the Jubilee of the Gustavus Adolphus Society, which seeks to aid Protestant Churches in Roman Catholic countries. It was adopted by the Salzburg Emigrants of 1732, as their travelling hymn. Sung at Hermannsburg at the farewell service when Ludwig Harms was sending forth his first band of missionaries. During the Luther Celebrations, Sept. 12-14, and Nov. 10-12, 1883, it was sung in the Castle Church at Wittenberg, Sept. 12; at Eisleben at the unveiling of the Luther memorial in the Market Place, Nov. 10; and at countless celebrations in Germany, Great Britain, and America, in the original, or in various English versions.
Since the above remarks were put in type an elaborate monograph by Dr. J. Linke, of Altenburg, has appeared under the title Wann wurde das Lutherlied Ein’ feste Burg ist unser Gott verfasst? Leipzig, 1886. Dr. Linke discusses with abundant research and polemic the various theories already noted, and the more recent combinations and hypotheses. His opinion is that the hymn was written on or about Oct. 31, 1525; and he quotes many interesting parallels from Luther's contemporaneous writings, and especially from his lectures on Zechariah, written about the end of October, 1525. But that such a hymn could remain in manuscript from that date till the publication of Klug Gesang-Buch, in 1529, seems very improbable; and no trustworthy evidence is forthcoming that it appeared in print before 1529.

In Klug's Gesang-Buch,1529, likewise appeared the magnificent chorale by Luther, evidently the product of the same mind and of the same inspiration. It has been strikingly, if somewhat inappropriately, used by Meyerbeer in The Huguenot; more recently by Mendelssohn in the fifth movement of his Reformation Symphony, 1830; and by Wagner as a motive in his Kaisersmarsch, written to commemorate the return of the Emperor William in 1871, after the Franco-German war. It has now become well-known in England, and in its proper form is included in the Chorale Book for England, 1863 (see below).

An attempt has recently been made to show that this is a patchwork of snatches from various portions of the Roman Gradual, which Luther, while a monk, must often have sung. But even if this were clearly shown, to Luther would still be due the honour of smelting these scattered fragments and producing from them a glorious melody, now all of one piece. (See the Blätter für Hymnologie, 1884, pp. 82, 101, &c.) 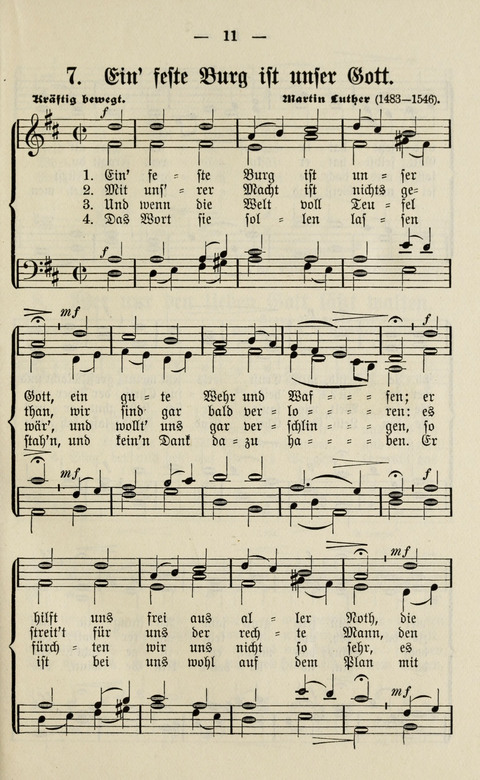