1 Fairest Lord Jesus,
ruler of all nature,
O thou of God and man the Son,
Thee will I cherish,
Thee will I honor,
thou, my soul's glory, joy, and crown.


2 Fair are the meadows,
fairer still the woodlands,
robed in the blooming garb of spring:
Jesus is fairer,
Jesus is purer
who makes the woeful heart to sing.


3 Fair is the sunshine,
fairer still the moonlight,
and all the twinkling starry host:
Jesus shines brighter,
Jesus shines purer
than all the angels heaven can boast.


4 Beautiful Savior!
Lord of all the nations!
Son of God and Son of Man!
Glory and honor,
praise, adoration,
now and forevermore be thine.

ST. ELIZABETH appears to be an eighteenth-century tune from the Glaz area of Silesia. It has always been associated with this text. No factual data exists for the legend that this text and tune date back to the twelfth-century crusades, although those apocryphal stories explain one of the names by w…

This hymn expounds on the theme of the beauty of Christ and the Creation in an overflowing expression of praise, similar to King David's statement: “One thing have I asked of the Lord, that will I seek after: that I may dwell in the house of the Lord all the days of my life, to gaze upon the beauty of the Lord …” (Psalm 27:4 ESV).

The original, anonymous German text of this hymn first appeared in a 1662 manuscript in Münster, Germany. It was known in Germany, but its wider popularity came when A. H. Hoffman von Fallersleben and E. F. Richter published it in Schlesische Volkslieder, a collection of folk songs from Silesia, in 1842. There are two translations in common use. One is by Joseph Seiss and is titled “Beautiful Savior.” The other, which is more common, is anonymous and first appeared in Richard Storrs Willis's Church Chorals and Choir Studies in 1850. The text typically appears with four stanzas, which are all on the theme of the beauty of creation and the greater beauty of Christ, the Savior.

The tune that is best known with this text is usually called CRUSADER'S HYMN. It is also sometimes named SCHÖNSTER HERR JESU, after the first line of the German text. After it was used as a crusader's march in Franz Liszt's 1862 oratorio, The Legend of St. Elizabeth, the tune was also named ST. ELIZABETH. Though it is not the original tune for this text, SCHÖNSTER HERR JESU has been associated with “Fairest Lord Jesus” since both appeared in Fallersleben's and Richter's Schlesische Volkslieder in 1842.

This tune has the flexibility to be sung with a gentle mood or a powerful one, depending on the accompanying instruments and their volume. It is a flowing tune, and congregations may lose their rhythmic unison between the third and fourth lines unless the leader indicates clearly where to take a breath.

This hymn may be used as an opening hymn of praise or as a hymn of response. It may be sung at any time of year, and it is suitable for use at Christmas, especially in medley with carols, such as in the handbell setting combining “O Come Let Us Adore Him” with “Fairest Lord Jesus.” The frequent allusions to the beauty of nature make it suitable for use as a simple “Spring Carol,” in a choral setting for SAB choir accompanied only by a few handbells. The tune blends well with some contemporary worship songs, making it suitable for a blended worship service, such as in the medley “You Are My All in All/Fairest Lord Jesus.” 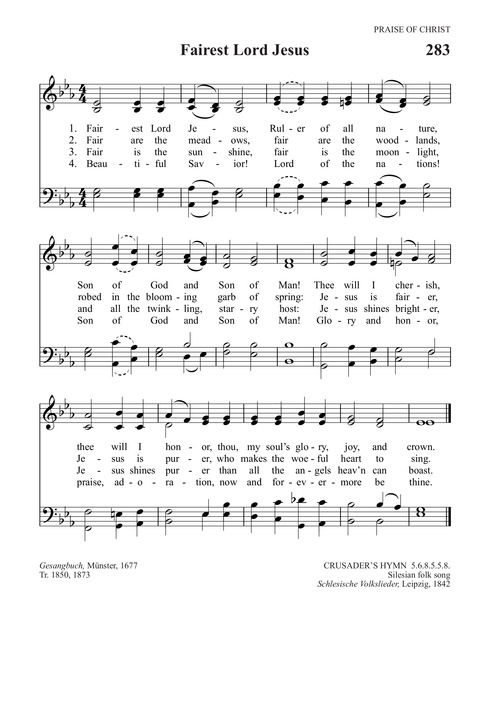 Hymns for a Pilgrim People #57

Hymns of the Christian Life #48

Hymns to the Living God #70

Praise! Our Songs and Hymns #58

Sacred Selections for the Church #514

The Hymnal for Worship and Celebration #88

The Song Book of the Salvation Army #177