Edward Perronet was the son of the Rev. Vincent Perronet, Vicar of Shoreham, Kent. For some time he was an intimate associate of the Wesleys, at Canterbury and Norwich. He afterwards became pastor of a dissenting congregation. He died in 1792. In 1784, he published a small volume, entitled "Occasional Verses, Moral and Social;" a book now extremely rare. At his death he is said to have left a large sum of money to Shrubsole, who was organist at Spafield's Chapel, London, and who had composed the tune "Miles Lane" for "All hail the power of Jesus' Name!" --Annotations of the Hymnal, Charles Hutchins, M.A. 1872. ------ Perronet, Edward. The Perronets of England, grandfather, father, and son, were French emigres. David Perronet cam… Go to person page >
^ top

It is interesting that those who express the most eloquent praise are often the people we would deem the least likely to have the ability. Yet David, the adulterating, murdering, lying king of Israel wrote a good deal of the Psalms, which we still use today as our guide for worship. In the same way, all accounts show Rev. Edward Perronet (1721-1792) to be a sharp-tongued, difficult personality, who would rather pick a fight over theology than display brotherly love.

Though Perronet was a minister of the established Church of England, his evangelical, or "dissenting" roots grew deep. His father had been associated with Whitefield and the Wesleys, and Perronet himself worked with the Wesleys until they split over the question of administering the Sacraments. Perronet then found work as a chaplain for the famous patroness of the evangelical movement, Countess of Huntingdon, but was soon removed from his post due to his violent attacks on the established church. (Acidic remarks like, "I was born and I am like to die in the tottering communion of the Church of England; but I despise her nonsense." are the kind that force even the hardiest dissenter to keep their distance!)

The text first appeared anonymously in 1780 in Gospel Magazine with the title "On the Resurrection." Many argue that the hymn has experienced continued popularity due to the hymntune MILES LANE which appeared with it in Gospel Magazine and the tunes CORONATION and DIADEM which have accompanied the text since that time. The poem was edited and added to by Rev. John Rippon for his book A Selection of Hymns, from the Best Authors intended to be an Appendix to Dr. Watts's Psalms and Hymns (1787), and his edition is the one commonly used in hymn books today. --Greg Scheer, 1997

All hail! the power of Jesus' Name. E. Perronet. [On the Resurrection.] In the November number of the Gospel Magazine, 1779, the tune by Shrubsole, afterwards known as "Miles Lane," appeared with the following words:—

"All hail! the pow'r of Jesu's Name;
Let angels prostrate fail;
Bring forth the Royal Diadem,
To crown him Lord of all."

In the following April, 1780, the complete hymn, with the title, "On the Resurrection, the Lord is King," was given in the same magazine, the additional verses being:—

"Let highborn seraphs tune the lyre,
And as they tune it, fall
Before His face who tunes their choir,
And crown Him Lord of all.

Crown Him ye morning stars of light,
Who fix'd this floating ball;
Now hail the strength of Israel's might,
And crown Him Lord of all.

Crown Him, ye martyrs of your God,
Who from His altar call;
Extol the stem of Jesse's rod,
And crown Him Lord of all.

Ye seed of Israel's chosen race,
Ye ransom'd of the fall,
Hail Him Who saves you by His grace,
And crown Him Lord of all.

Hail Him, ye heirs of David's line,
Whom David Lord did call;
The God incarnate, man Divine,
And crown Him Lord of all.

Sinners! whose love can ne'er forget
The wormwood and the gall,
Go—spread your trophies at His feet,
And crown Him Lord of all.

Let every tribe and every tongue
That bound creation's call,
Now shout in universal song,
The crowned Lord of all.”

In 1785 it was included by the author in his Occasional Verses, Moral and Sacred, p. 22, and entitled, "On the Resurrection."
By comparing this text with that of modern hymnals, it will be at once seen that this revised and rewritten form of the text is that upon which all modern forms of the hymn are based, and that the correct designation is "E. Perronet, 1779-80; J. Rippon, 1787." The first line has also been altered in some collections to (1) "All hail! the great Immanul’s name " (sometimes "Emmanuel"). This was given in Wilks's edition of Whitefield's Collection, 1798, and has been continued to modem hymnals. We have also: (2) "All hail! the great Redeemer's name," in a very limited number of hymnbooks.

The use of this hymn in various forms and many languages is very extensive. In the number of hymnbooks in which it is found in one form or another, it ranks with the first ten in the English language. A rendering in Latin, "Salve, nomen potestatis," is given in Bingham's Hymnologia Christiana Latina, 1871.

MILES LANE is one of three tunes that are closely associated with this well-known and beloved text; CORONATION is found at 471. Other hymnals also include the more florid DIADEM, composed by James Ellor in 1838 and noted for its elaborate choral harmo¬nization. MILES LANE was published anonymously…

This hymn is a declaration of praise, but it’s also much more than that. The words both declare the majesty of Christ and task us with making that majesty known to all. Like many hymns describing the glory of God and the hope that one day all people will see that glory, this hymn alludes to Philippians 2:9-11: “at the name of Jesus every knee should bow, in heaven and on earth and under the earth, and every tongue acknowledge that Jesus Christ is Lord, to the glory of God the Father.” We long for this day, and declare our hope in its arrival in the text of this hymn. But are we willing to declare that hope to those who have not heard it? The phrase, “Easier said than done” comes to mind here. After we have sung these words of victory and longing, what do we do? Do we act on those words and turn our expectancy into realities? Or do we wait for someone else to do it for us? The fourth stanza of this great hymn declares, “We’ll join the everlasting song….” Everlasting means that we are a part of that song right now – are we willing to lift our voices together to sing more than a hymn, and truly crown our God Lord of all?

This is a hymn with a complicated history. The first verse appeared in the November 1779 Gospel Magazine to the tune of SHRUBSOLE, afterwards known as MILES LANE. In the April 1780 edition of the same magazine, the complete hymn was given with the title “On the Resurrection, the Lord is King.” Through a lot of cross-referencing, experts are quite certain the author of this text was Edward Perronet. Four years after this publication, G. Burder, in his Collection, adapted the hymn giving it four stanzas, altering some text, and titled it “The Coronation Hymn.” J. Rippon, in his 1787 Selection of Hymns, also altered the text. Most modern hymns are now based on a combination of Perronet’s and Rippon’s text. The variations and different pairings of the text abound – but many hymnals include four stanzas: 1-3 by Perronet and altered by Rippon, and stanza 4 by Rippon.

There are three main tunes for this hymn: CORONATION is found in most American hymnals along with DIADEM, which is also found in hymnals from Great Britain along with MILES LANE. CORONATION features a sturdier marching feel, while DIADEM is more ornate and includes elaborate harmonies. MILES LANE has a wide melodic range, and a climax in the refrain.

There are a host of stylistic variations for this hymn. Here are just a few suggestions:

This declaration of the kingship of Christ is perfect for Ascension Day services, processionals, or any celebration of Christ’s authority and victory. It could be used as a hymn of praise at the beginning of the service –one possible grouping of songs would start with “O For a Thousand Tongues to Sing” in the key of G, transition into “He Reigns” by the Newsboys in the key of F, and right out of that begin “All Hail the Power” also in the key of F – this works especially well if all three songs are led by guitar or piano.

Some options for piano and organ accompaniment can be found in:

With Heart and Voice: songs for all God's children #129 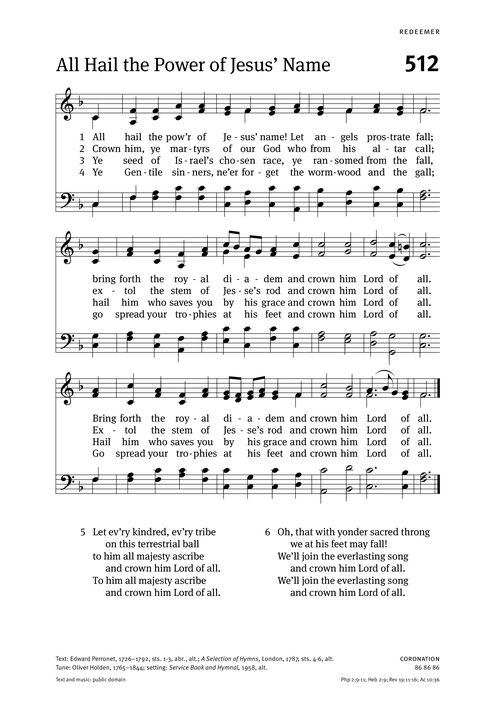 A New Hymnal for Colleges and Schools #21

A New Hymnal for Colleges and Schools #22

Great Songs of the Church (Revised) #250

Great Songs of the Church (Revised) #251

Hymns for a Pilgrim People #215