1 You servants of God, your Master proclaim,
and publish abroad his wonderful name;
the name all-victorious of Jesus extol;
his kingdom is glorious and rules over all.


2 God rules in the height, almighty to save;
though hid from our sight, his presence we have;
the great congregation his triumph shall sing,
ascribing salvation to Jesus our King.


3 "Salvation to God, who sits on the throne!"
let all cry aloud, and honor the Son;
the praises of Jesus the angels proclaim,
fall down on their faces and worship the Lamb.


4 Then let us adore and give him his right:
all glory and power, all wisdom and might,
all honor and blessing with angels above
and thanks never ceasing for infinite love.

(no biographical information available about Norton.) Go to person page >

The year this text was written, 1744, was a year of political and religious turmoil in Britain. The newly formed Methodist societies were suspected of being merely disguised Roman Catholic societies and were accused of attempting to overthrow the Crown. To strengthen and reassure his Methodist followers,
Charles Wesley (PHH 267) anonymously published Hymns for Times of Trouble and Persecution (1744). This text, in seventeen stanzas, was the first of the "Hymns to be Sung in a Tumult." Of those stanzas, 1 and 4-6 of Wesley's Part I are included; the battle-song stanzas, which the small but heroic Methodist groups sang in the face of violent opposition, are omitted.

The text is a hymn of thankful praise to Christ for his victorious reign and for providing salvation for his people. It reveals the cosmic scope of Christ's kingdom (st. I) and helps us to join our voices with the great doxology to Christ, the Lamb, as foretold in Revelation 5:9-14 (st. 24). In the first stanza "servants" refers to all Christians, not just clergy, to those made "to be a kingdom and priests to serve our God" (Rev. 5:10).

Liturgical Use:
A great doxology for festive services such as Easter; with eschatological preaching during Advent; other services that focus on Christ's work of redemption and his glory.

All tunes published with 'Ye Servants of God, Your Master Proclaim'^ top

The words of this hymn of praise allude frequently to scripture passages. The first stanza reminds one of Philippians 2:10-11, where “at the name of Jesus … every tongue [will] confess that Jesus Christ is Lord …” (ESV). The last two stanzas are especially rich with allusions to scenes of worship in Revelation, including a quotation from Revelation 7:10, “Salvation belongs to our God, who sits on the throne!” (ESV)

Charles Wesley is the author of this hymn text. He wrote it in 1744 for Hymns for Times of Trouble and Persecution in the section titled “Hymns to Be Sung in Tumult.” The occasion for writing was a time of persecution for Methodists in England. They were accused of disloyalty to the British Crown among other things, and were therefore subject to violent persecution.

The text originally had six stanzas, but two of them were quite specific to the Methodist persecution of the time, and are therefore omitted in modern hymnals. Otherwise, the text has been passed down in a very consistent form. The four stanzas elaborate on the theme of God's glory and victorious power. The last two stanzas allude to eschatological passages throughout Revelation.

HANOVER and LYONS are quite similar tunes which share the same meter and opening five notes. HANOVER is more popular with this text, and was written in 1708. The composer is not known for certain, as it first appeared anonymously. However, William Croft was involved in the collection of psalm tunes in which it was first published, Tate and Brady's The Supplement to the New Version of the Psalms, and he is generally credited with the tune. It has also been credited to George F. Handel, but since he did not come to England until a few years after the tune was published, it is unlikely that he is the composer. However, this association may have led to the name of the tune. Handel became Kapellmeister to George I of England, who was of the House of Hanover.

The composer of LYONS is also unknown. The tune first appeared in William Gardiner's Sacred Melodies in 1815 with the note “Subject Haydn,” which led to the theory that it was originally written by someone with the surname of Haydn. Whether it was the famous Franz Joseph Haydn or his brother Johann Michael Haydn has been a matter of debate. However, some recent research has indicated that any attribution to Haydn may be spurious. For either tune, sing with a sturdy tempo and bright accompaniment to suit the celebratory nature of the text.

This hymn can be used as a doxology for a festive occasion, or for a service based on a text from Revelation depicting worship before the throne of God. For such a use, “HANOVER” and “LYONS” are arrangements for brass quartet designed to supplement the organ for congregational singing. Either tune would make a good choice for a glorious prelude or postlude in settings such as are found for HANOVER in “Three Hymns of Praise, Set 4” for organ or “He Leadeth Me” for piano. This hymn could also be used in a medley with other hymn tunes of praise, such as in “Prayludes for Summer,” for piano where LYONS is combined with LOBE DEN HERREN and ITALIAN HYMN. 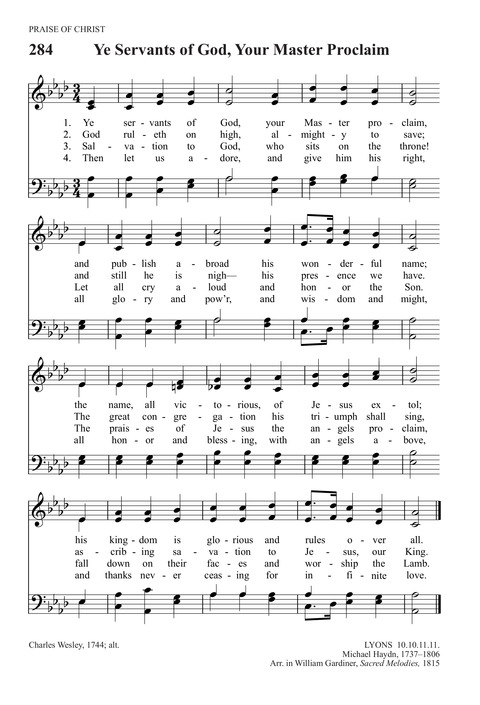 Great Songs of the Church (Revised) #175

Hymns for a Pilgrim People #75

Hymns of the Christian Life #446

Praise! Our Songs and Hymns #68

Psalms and Hymns and Spiritual Songs #7

The Hymnal for Worship and Celebration #17

The Irish Presbyterian Hymbook #246a

The Irish Presbyterian Hymbook #246b

The Song Book of the Salvation Army #24

Welsh and English Hymns and Anthems #39b