1 Gentle Mary laid her Child
Lowly in a manger;
There He lay, the undefiled,
To the world a stranger:
Such a Babe in such a place,
Can He be the Savior?
Ask the saved of all the race
Who have found His favor.


2 Angels sang about His birth;
Wise men sought and found Him;
Heaven's star shone brightly forth,
Glory all around Him:
Shepherds saw the wondrous sight,
Heard the angels singing;
All the plains were lit that night,
All the hills were ringing.


3 Gentle Mary laid her Child
Lowly in a manger;
He is still the undefiled,
But no more a stranger:
Son of God, of humble birth,
Beautiful the story;
Praise His name in all the earth,
Hail the King of glory!

Birth: December 4, 1859, Durham County, England Death: May 27, 1933, Toronto, Canada Joseph Simpson Cook, born in England in 1859, wrote the lyrics of "Gentle Mary Laid Her Child." He was educated at Wesleyan College and McGill University in Montreal Canada. Though he began his career as a Methodist minister, he later transferred to the United Church of Canada. --www.songsandhymns.org/… Go to person page >
^ top

All tunes published with 'Gentle Mary Laid Her Child'^ top

The theme of the hymn is the significance of the Christ-child. In the first stanza, he is depicted as a lowly, unremarkable human baby; some doubts exist as to whether someone so apparently ordinary could be so special. After the second stanza recounts the spectacular appearance of angels and wise men glorifying the Christ, the third stanza describes how the picture changed with this new understanding – no longer is he a stranger of dubious ability, but the undefiled Son of God who has come to save the world.

“Gentle Mary Laid Her Child” was written by Joseph Simpson Cook in 1919. One writer reports that it “was written in 1919 for a carol competition sponsored by the Christian Guardian and was first published in the Christmas issue of the magazine by the Methodist Publishing House, Toronto” (Fred D. Gealy, Companion to the Hymnal, p. 185). The first and third stanzas share the same structure and similar wording as they bracket the second stanza, which describes a high point of the Christmas story.

The tune TEMPUS ADEST FLORIDUM is named after its original Latin text, which was loosely translated into English as “Spring has now unwrapped the flowers.” It was originally a spring carol, but is better known with the Christmas carol “Good King Wenceslas.” The source of this tune is the 1582 collection Piae Cantiones.

This hymn is sung in Christmas services. It could be paired with another hymn about the angels' visit to the shepherds, such as “Angels From the Realms of Glory” or “While Shepherds Watched Their Flocks.”

Hal Hopson's setting of “Gentle Mary Laid Her Child” for choir and keyboard fits the simplicity of the tune, and includes optional instruments (string quartet, handbells). Especially effective is the second verse, which is about the angels visiting the shepherds, where the lower voices sing the angels' song in Latin, “Gloria in excelsis Deo,” underneath the melody in the soprano. Gilbert Martin has set the text of “Gentle Mary” to an original melody in his choral arrangement. Instrumental arrangements that could be used for a prelude or special music include “Good King Wencesles”, a handbell arrangement of the tune by Martha Lynn Thompson with a full sound, and “A Carol Suite” by Michael Burkhardt, which includes a setting of this tune for organ and clarinet or oboe, and flute. 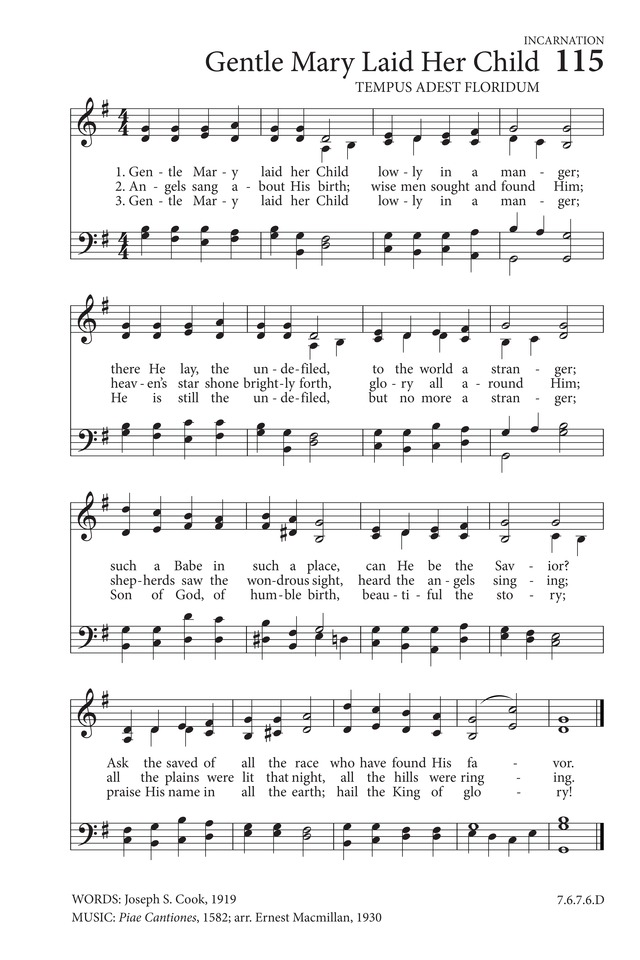 Hymns for a Pilgrim People #96