Angels we have heard on high

1 Angels we have heard on high,
singing sweetly through the night,
and the mountains in reply
echoing their brave delight.


2 Shepherds, why this jubilee?
Why these songs of happy cheer?
What great brightness did you see?
What glad tidings did you hear? [Refrain]


3 Come to Bethlehem and see
him whose birth the angels sing.
Come, adore on bended knee
Christ the Lord, the newborn King. [Refrain]


4 See him in a manger laid
whom the angels praise above.
Mary, Joseph, lend your aid,
while we raise our hearts in love. [Refrain]

"Les anges" is a French noel (from the Languedoc region) believed to date from the eighteenth century. Its text and tune were first published in the Nouveau Recueil de Cantiques in 1855. The English translation originated as a free imitation from the French by James Chadwick, which was adapted by Henri Hemy in his Roman Catholic collection, Crown of Jesus Music (1862). Of the original eight-stanza French text, stanzas 1, 2, and 4 are included.

The Christmas gospel in Luke 2:8-15 is the basis for the text. The hymn's refrain, "Gloria in excelsis Deo" is the first part of the angels' chorus in Luke 2: 14; it is one of the few Latin phrases in common use in Protestant churches.

Liturgical Use:
Christmas season; in "carols from many lands" choral services.

GLORIA is the French noel tune traditionally associated with this text. The popularity of this carol stems from its refrain–all those cascading phrases in which human beings imitate the angels' chorus. Try using the refrain by itself as a short choral introit during the Christmas season, perhaps w…

All tunes published with 'Angels We Have Heard on High'^ top

It’s a simply beautiful image: the shepherds in a great field, staring up in wonder at a sky full of the heavenly hosts, singing out their praise and joy, the echoes of their song of reverberating off the mountains to add to the cacophony. It isn’t hard to imagine the shepherds’ response. This group of young boys must have looked at each other wide-eyed, then whooped and cheered and run as fast as they could into the village, a stampede of sheep following them. Giddy with excitement and out of breath, did they burst into the stable and crowd around the manger? Or did they stop at the stable door, suddenly shy and overwhelmed, and peek in at the couple holding a tiny baby? Did they fully understand what they were witnessing? Do we even fully understand what they were witnessing? This hymn invites us to “Come to Bethlehem and see.” Today, we go to Bethlehem. We peak through the stable doors, and we kneel in amazement before the Christ child, our ears still ringing from the angels’ song. More so than the shepherds, we are able to see who this child is, because we know the Gospel story. We know that the angels would come again, this time to announce that Christ was not where the women looked for Him, but that He had risen. It isn’t hard to imagine that a “Gloria” would have been on those angels’ lips as well.

This text originates from a French carol, believed to date back to the eighteenth century, and first published in eight stanzas in Choix de cantiques sur des airs nouveaux in 1842. The English version we use today comes from a translation of the French by James Chadwick, and adapted for use by Henri Hemy in Crown of Jesus Music in 1862. Most modern hymnals include three verses: “Angels we have heard on high,” “Shepherds, why this jubilee,” “Come to Bethlehem, and see.” There are a number of differences in the text between hymnals, so make sure you've got the words you want when printing or projecting them for a congregation.

The tune GLORIA, with its beautiful cascading “Glorias,” was first published with the French text mentioned above. The structure of the hymn seems to imply that a small choir or soloist is to sing the verses, with the congregation joining on the refrains. However, most congregations will want to sing the entire song. If this is the case, vary the accompaniment with lighter instrumentation on the verses and a fuller sound on the “Glorias.” While you probably won’t be singing the hymn in Latin or with full strings accompaniment, Andrea Bocelli’s rendition is a good example of how to build throughout the song with your accompaniment, beginning quietly and ending with a full, rich, triumphant sound.

This beautiful and glorious hymn is a favorite on Christmas morning. The references to the angels and the shepherds imply that this hymn is an announcement of the birth of Christ; as such, it would fit well at the beginning of the service, as a processional or opening hymn. The familiar refrain of this hymn, “Gloria in excelsis Deo,” can be sung as a choral introit on Christmas day, and throughout the Christmas season. 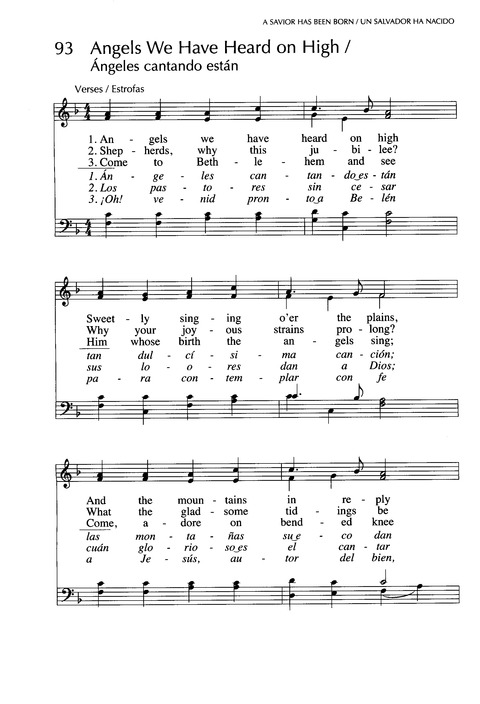 Hymns for a Pilgrim People #121

Hymns of the Christian Life #62

Display Title: Gloria in excelsis Deo First Line: Angels we have heard on high Date: 1992
Hymns of the Christian Life #62

The Hymnal for Worship and Celebration #132