1 Hosanna, loud hosanna
the little children sang;
through pillared court and temple
the lovely anthem rang.
To Jesus, who had blessed them,
close folded to his breast,
the children sang their praises,
the simplest and the best.


2 From Olivet they followed
mid an exultant crowd,
the victory palm branch waving,
and chanting clear and loud.
The Lord of earth and heaven
rode on in lowly state,
nor scorned that little children
should on his bidding wait.


3 "Hosanna in the highest!"
That ancient song we sing,
for Christ is our Redeemer,
the Lord of heaven, our King.
O may we ever praise him
with heart and life and voice,
and in his blissful presence
eternally rejoice.

Jeannette Threlfall’s (b. Blackburn, Lancashire, England, 1821; d. Westminster, London, 1880) life was extremely difficult: she was orphaned at an early age, and two serious accidents caused her to be an invalid for life. But she bore her misfortune with grace and fortitude and maintained a ministry to many people who came in contact with her. Threlfall wrote devotional verse, which was published anonymously in various periodicals and later collected in Woodsorrel, or Leaves from a Retired Home (1856) and Sunshine and Shadow (1873), which included "Hosanna, Loud Hosanna." Bert Polman… Go to person page >
^ top

Like "All Glory, Laud, and Honor" (375/376), this text is based on Christ's triumphal entry on Palm Sunday. However, "Hosanna, Loud Hosanna" focuses more on the children's role in that event. The text was written by Jeannette Threlfall (b. Blackburn, Lancashire, England, 1821; d. Westminster, London, 1880) in an "idle moment" (as she says she wrote all of her hymns, all others of which have been forgotten). Undoubtedly, Threlfall had Mark 11 in mind when she wrote this text, but she also alludes to Jesus' welcoming of the children in Mark 10:13-16. Stanzas 1 and 2 tell how the children shared in the songs during Christ's procession into Jerusalem. Stanza 3 is our cue to participate in praising our Redeemer.

Threlfall's life was extremely difficult: she was orphaned at an early age, and two serious accidents caused her to be an invalid for life. But she bore her misfortune with grace and fortitude and maintained a ministry to many people who came in contact with her. Threlfall wrote devotional verse, which was published anonymously in various periodicals and later collected in Woodsorrel, or Leaves from a Retired Home (1856) and Sunshine and Shadow (1873), which included "Hosanna, Loud Hosanna."

Liturgical Use:
Palm Sunday, in conjunction with the Palm Sunday gospel reading or the children's message.

There was a video that went viral a few years ago of a four-year-old girl looking in the mirror and exclaiming how much she loved everything in her life. I suspect it went viral because of its infectious positivity and the reminder that we could all use some child-like enthusiasm and gratitude. If we still need this message today, it means we have forgotten in part the beautiful story of Jesus welcoming the children unto him. Those children were able, more than the adults, to receive the Kingdom of Heaven like a gift, with unquestioning joy and gratitude.

Jeannette Threlfall reminds us of that joy in her hymn, “Hosanna, Loud Hosanna.” She imagines those children running throughout the city, bursting with excitement and love for Jesus; a simple, undignified, giddy kind of love. As we raise our own “Hosannas,” we are called and invited to do so with the same exuberance and joy as these children who praised the One who first loved them.

Jeannette Threlfall said that she often wrote her hymns in an “idle moment” (Psalter Hymnal Handbook). Of all her hymn texts and poems, this is the only one still sung. Almost every modern hymnal contains the same three verses, but those verses have all changed over time. Today’s second verse is made up of the original second half of verse two, and the first half of the original verse three. Her text mainly relates the events of Christ’s triumphant entry into Jerusalem, but it also alludes to Mark 10:13-16, where Jesus welcomes the little children to come to Him, pointing more starkly to the kind of King that Jesus was and is.

Almost across the board, Threlfall’s text is set to the much-loved tune ELLACOMBE. This tune was first written for the Duke of Wurtemberg and published in a chapel hymnal in 1784. It’s now the accompanying tune for a number of hymns, but is most often sung with “Hosanna, Loud Hosanna.” This is a simple song to teach children for a processional, and to sing in harmony.

Since this hymn is almost always sung on Palm Sunday, one option that might mix things up is to use the tune ST. THEODULPH, the tune for “All Glory, Laud, and Honor.” Both of these hymns are often sung on Palm Sunday; if you sing one at the beginning and one at the end of the service, using the same tune creates nice bookends for your time of worship.

This Palm Sunday hymn is fitting both as a processional and as a hymn of response to the Gospel reading. If used as a processional, it would be difficult to have the children sing and walk with palm branches at the same time, but if it’s sung at a different point in the service, consider having a children’s choir sing either the entire hymn or the first verse with the congregation coming in on verse two. Again, note the depth of the message in Threlfall’s hymn. By alluding to the story of Jesus welcoming the little children, she both demonstrates what kind of King Jesus is, and what kind of worship we ought to bring before Him. Christ, who loves the helpless and the innocent, asks for our simple, undignified, joyful praise. Consider writing a prayer of confession that expresses our failure at humbling ourselves to the point of undignified love and worship, and asking Christ to give us hearts like those of children. You could then sing this hymn as a response of assurance and dedication. 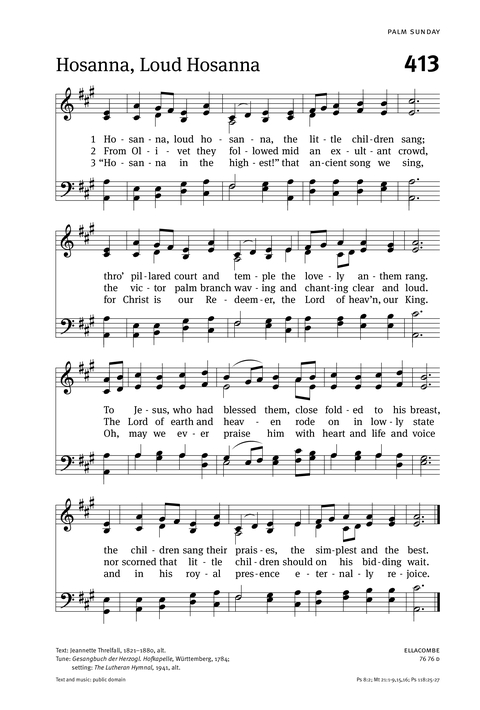 Great Songs of the Church (Revised) #164

Hymns for a Pilgrim People #187

Hymns of the Christian Life #80

The Hymnal for Worship and Celebration #174

With Heart and Voice #93