1 Go to dark Gethsemane,
You who feel the tempter's pow'r;
Your Redeemer's conflict see;
Watch with Him one bitter hour;
Turn not from His griefs away;
Learn of Jesus Christ to pray.


2 Follow to the judgment hall;
View the Lord of life arraigned;
O the worm-wood and the gall!
O the pangs His soul sustained!
Shun not suff'ring, shame, or loss;
Learn of Him to bear the cross.


3 Calv'ry's mournful mountain climb
There' adoring at His feet,
Mark the miracle of time,
God's own sacrifice complete:
"It is finished!" Hear the cry;
Learn of Jesus Christ to die.


4 Early hasten to the tomb
Where they laid his breathless clay;
All is solitude and gloom;
Who hath taken Him away?
Christ is ris'n! He meets our eyes:
Savior, teach us so to rise.

James Montgomery (PHH 72) wrote two versions of "Go to Dark Gethsemane," the first of which appeared in Thomas Cotterill's Selection of Psalms and Hymns in 1820. The second version, originally published in his Christian Psalmist (1825), is the more common one found in hymnals today. Small alterations have been made in the text, most notably the change from a command ("learn of Jesus Christ to pray") to a prayer of petition in the final phrase in each stanza. Many hymnals delete his original fourth stanza, which focused on Christ's resurrection.

The text exhorts us to follow Christ as we meditate on his sorrow in the Garden of Gethsemane (st. 1), on his suffering on the cross (st. 2), and on his sacrificial death (st. 3); each stanza ends with a corresponding petition.

--Psalter Hymnal Handbook
========================
Go to dark Gethsemane. J. Montgomery. [Passiontide.] Of this popular hymn there are two texts, differing widely from each other, and both by Montgomery. The first appeared in Cotterill's Selection, 1820, and subsequent editions. It reads thus:—

"The last sufferings of Christ.
1. “Go to dark Gethsemane,
Ye that feel the tempter's power;
Your Redeemer's conflict see;
Watch with Him one bitter hour:
Turn not from His griefs away;
Learn from Him to watch and pray.
2. "See Him at the judgment-hall,
Beaten, bound, reviled, arraign'd:
See Him meekly bearing all!
Love to man His soul sustain'd!
Shun not suffering, shame or loss;
Learn of Christ to bear the cross.
3. "Calvary's mournful mountain view;
There the Lord of Glory see,
Made a sacrifice for you,
Dying on the accursed tree:
‘It is finish'd,' hear Him cry:
Trust in Christ, and learn to die.
4. "Early to the tomb repair,
Where they laid his breathless clay;
Angels kept their vigils there:
Who hath taken Him away?
‘Christ is risen!' He seeks the skies;
Saviour! teach us so to rise."

In 1825, Montgomery included this hymn in its second and revised form in his Christian Psalmist, No. 491, as follows:—

"Christ our example in suffering.
1. “Go to dark Gethsemane,
Ye that feel the tempter's power
Your Redeemer's conflict see,
Watch with Him one bitter hour;
Turn not from bis griefs away,
Learn of Jesus Christ to pray.
2. "Follow to the judgment-hall,
View the Lord of life arraign'd;
O the wormwood and the ga!
O the pangs his soul sustain'd!
Shun not suffering, shame, or loss,
Learn of Him to bear the cross.
3. "Calvary's mournful mountain climb;
There adoring at his feet,
Mark that miracle of Time, —
God's own sacrifice complete:
’It is finish'd';—hear their cry;
Learn of Jesus Christ to die.
4. "Early hasten to the tomb,
Where they laid his breathless clay;
All is solitude and gloom, —
Who hath taken Him away ?
Christ is risen:—He meets our eyes;
Saviour, teach us so to rise."

[In Montgomery's marked copy of the 1st edition, stanza iii., line 5, reads "hear their cry." In the margin he altered it in manuscript to "hear Him cry:" and this reading was given in later editions. In his Original Hymns, 1853, it reads, "hear the cry."]

From the year 1825 the original and this revised text have passed on, side by side, unto the present date, one editor copying from Cotterill's Selection, and another from Montgomery's Christian Psalmist, until, of the hymnals now in common use, of those which have adopted the hymn, about one-third have the original text of 1820, and, with a few exceptions, yet to be noted, the remaining two-thirds have the text of 1825. Amongst those adopting the original text are many of the Public School collections, as Rugby, Harrow, Marlborough, &c, and also Mercer, Kennedy, Pott, The Anglican Hymn Book, Barry, Church Hymns, &c, sometimes with abbreviations and very slight alterations. Those following the revised form of 1825, include Hymns Ancient & Modern, Hymnal Companion, Turing's Collection, Snepp, Alford, Society for Promoting Christian Knowledge Psalms & Hymns and others, and also most of the collections of the Nonconformists. In America, where it is in extensive use, the text usually adopted is that of 1825. In many cases it must be noted that stanza iv., “Early hasten to the tomb," is omitted. Another form in three stanzas was given in Hall's Mitre Hymn Book, 1836. This is repeated in the New Mitre Hymnal, 1875, but is seldom if ever found elsewhere.
It will be seen from the foregoing that Mr. Ellerton's somewhat elaborate note in the S. P. C. K. Church Hymns, folio edition p. lxvi., is based on an error, in concluding that the text in Church Hymns was altered by an unknown hand from Montgomery's Christian Psalmist, 1825, whereas it is Montgomery's text of 1820, with two very slight alterations only. Original text as above; author's revised and authorized text in his Original Hymns, 1853.

Go to dark Gethsemane, p. 430, ii. Nearly all the alterations in the revised version of this hymn as printed on p. 430 were given in the Leeds Selection, 1822, No. 804, which shows that the revision was originally made for that Selection and not for the Christian Psalmist.

All tunes published with 'Go to Dark Gethsemane'^ top

As this hymn is sung, contemplate the lessons we can learn from Jesus through His Passion. Consider how Jesus prayed fervently in the face of certain death that He would do God's will, and how He warned His disciples in the Garden of Gethsemane, “Pray that you may not enter into temptation” (Luke 22:40, ESV). In the scene of the mock trial in the second stanza, see how much pain Jesus accepted without a murmur. Jesus went even further in His selflessness in giving up His very life (st. 3). Meditate on how Christ calls each of us to take up our cross daily and follow Him (Luke 9:23). Finally, with the risen Christ, we look forward to the time when we, too, will rise.

James Montgomery was the son of a Moravian minister, and was familiar with the Moravian practice (which came from the Lutherans) of reading through a harmonized account of the Passion, interspersing it with hymns. This text, originally written in 1820, seems designed with this practice in mind, for its theme and structure fit such a worship style perfectly. The first version appeared in Thomas Cotterill's Selection of Psalms and Hymns, published in 1820. In 1822, Montgomery substantially revised his hymn. The second version, first published in Montgomery's Christian Psalmist in 1825, is the more common one today.

Each of the four stanzas of this hymn describes a scene from the story of Christ's Passion: the temptation in the Garden of Gethsemane, the mock trial and scourging, the Crucifixion, and the Resurrection (though this last stanza is often omitted from hymnals). The first three stanzas each conclude with a lesson we can learn from Christ in that scene: how to pray, how to suffer silently, and how to die. The fourth stanza has a petition that Christ will teach us to rise with Him.

The tune most closely associated with this text is REDHEAD 76. The title comes from the last name of the composer, English church organist Richard Redhead, and the fact that it was number 76 in Redhead's Church Hymn Tunes, published in 1853. It was associated there with the text “Rock of Ages,” hence one of its alternate titles, PETRA. It is also called GETHSEMANE, after its use with this text, or simply REDHEAD. Another name for the tune is AJALON, which may be a reference to Joshua 10:12-13, though the connection of that story to this tune is unknown.

This tune is short and repetitive. The first and last phrases are nearly identical, and the two halves of the middle phrase are likewise. Carlton Young complains “the tune expresses prevailing mid-nineteenth century Anglo-Catholic perceptions that to recapture the spirit of antiquity is to compose reserved, understated, if not cheerless, hymn tunes” (Companion to the United Methodist Hymnal, p. 361). While it is true that this tune is rather doleful, this mood suits the text rather well – at least the first three stanzas. Perhaps the tune's unsuitability for the joyful tone of the Resurrection is one reason why many hymnals omit that stanza.

It is a good idea to try unaccompanied singing on at least one stanza of this hymn. Sing in unison or in parts, and keep any accompaniment muted, unless the Resurrection stanza is sung, where it is appropriate to brighten the music.

This hymn is appropriate for Holy Week in general, and specifically for Good Friday services. If used for a service of readings and music, as Montgomery probably intended it, the structure of the text allows for some flexibility in how it is used. For a short, simple service, the congregation could sing one stanza after the corresponding scene in the Passion is read. In a more elaborate service, the hymn could be sung to summarize the story towards the end of the service, or at the beginning of the service to introduce the story before the readings elaborate on it, as in the Tenebrae service, “In Calvary's Shadow” , which opens with this hymn as a congregational setting, with choir, piano, and optional instruments. Two other settings of “Go to Dark Gethsemane” are a simple choral anthem to an unusual tune – BOZRAH from Southern Harmony, and an a capella choral piece to original music by Gordon Young. An organ setting of this hymn is part of the collection “Reflections on Holy Week.” 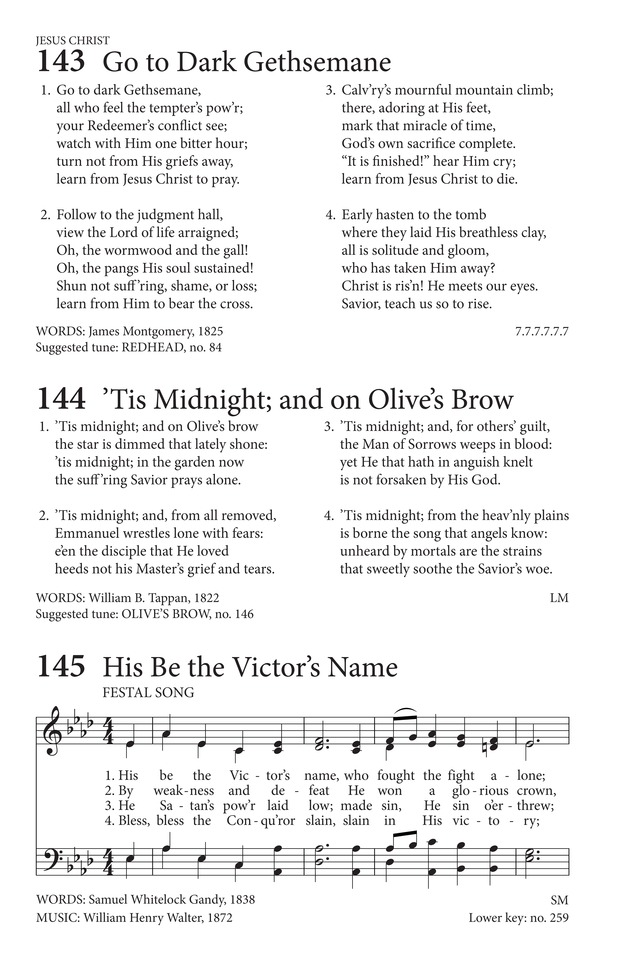 Hymns for a Pilgrim People #171

Hymns of the Christian Life #96