All Glory, Laud and Honor

All glory, laud, and honor

1 All glory, laud, and honor
to you, Redeemer, King,
to whom the lips of children
made sweet hosannas ring.
You are the King of Israel
and David's royal Son,
now in the Lord's name coming,
the King and Blessed One.


2 The company of angels
is praising you on high;
and we with all creation
in chorus make reply.
The people of the Hebrews
with palms before you went;
our praise and prayer and anthems
before you we present.


3 To you before your passion
they sang their hymns of praise;
to you, now high exalted,
our melody we raise.
As you received their praises,
accept the prayers we bring,
for you delight in goodness,
O good and gracious King!

Theodulph of Orleans appears to have been a native of Italy. He was brought to France by Charles the Great, perhaps when Charles returned from Italy in 781. He became Bishop of Orleans about 785, and soon afterwards also Abbot of Fleury. After the death of Charles he continued for some time on friendly terms with the Emperor Louis, but, falling under suspicion of being concerned in the plot in favour of Bernard of Italy, was imprisoned in 818, at Angers, where he seems to have died in 821, apparently on Sep. 18. There is a full and interesting sketch of his life and works in the Dictionary of Chr. Biog., iii., pp. 983-989. See also Potthast's Biblical History, Medii Aevi, 1896, vol. ii., p. 1058. The best and most recent edition of his Carm… Go to person page >
^ top

Theodulph, bishop of Orleans, wrote this text around 820 while he was imprisoned at Angers, France, for conspiring against King Louis the Pious. A probably apocryphal story from the early sixteenth century states that in a Palm Sunday procession King Louis passed the prison in which Theodulph was housed and heard the imprisoned bishop singing this hymn. According to the legend the king was so moved that he freed Theodulph and decreed the singing of "All Glory, Laud, and Honor" on all subsequent Palm Sundays.

The text was originally in thirty-nine Latin couplets, although only the first twelve lines were sung in ancient liturgical use (since a late-ninth-century manuscript from St. Gall). John M. Neale (PHH 342) translated the text into English in his Medieval Hymns and Sequences (1851). Neale revised that translation for The Hymnal Noted (1854); a further altered text was included in the original edition of Hymns Ancient and Modern (1861).

Based on Matthew 21:1-11 (and similar passages in Mark 11, Luke 19, and John 12), the text was originally written for a Palm Sunday procession. Thus it reflects on the original Palm Sunday's hymns of praise by the Jews as well as on our praise today.

All tunes published with 'All Glory, Laud and Honor'^ top

This hymn text was written by St. Theodulph of Orleans in 820 while he was imprisoned in Angers, France, for conspiring against the King, with whom he had fallen out of favor. The text acts as a retelling of the triumphal entry of Jesus into Jerusalem. The medieval church actually re-enacted this story on Palm Sunday using a standard liturgy that featured this hymn. The priests and inhabitants of a city would process from the fields to the gate of the city, following a living representation of Jesus seated on a donkey. When they reached the city gates, a choir of children would sing the hymn, then in Latin: Gloria, laus et honor, and the refrain was taken up by the crowd. At this point the gates were opened and the crowd made its way through the streets to the cathedral. Though we might not have any city gates to proceed through today, this hymn still acts as a royal hymn of praise and proclamation. Today we praise the “Redeemer, King” because we know just what kind of King He was and is – an everlasting King who reigns not just in Jerusalem, but over the entire earth. What more could we do but praise Him with glory, laud, and honor.

Theodulph’s original text consisted of 39 couplets, or 78 lines. Thankfully, this was significantly shortened by editors in 1859 to the familiar three-verse form used today, taken from the 1854 translation into English by J. M. Neale. Most hymnals include the same three verses, as shown in the Psalter Hymnal. One alteration found in some hymnals is that the first two lines, “All glory, laud, and honor to you, Redeemer, King, to whom the lips of children made sweet hosannas ring,” are used as a refrain sung at the beginning of each verse, each of which then consist of two lines of each original verse, resulting in five verses instead of three. This can be found in the Episcopal Hymnal: 1982 and the Presbyterian Hymnal. One advantage of this version is that if you’re using the hymn as a processional, the extra refrain extends the hymn and gives you more time.

The tune ST. THEODULPH or VALET WILL ICH DIR GEBEN was composed by Melchior Teschner in 1613 for a hymn of the same German name. It was soon joined with Theodulph’s text. The one downfall of this tune is the low-pitched ending. Some hymnals put the tune in the key of B flat to keep it from going too high on the ascending lines, but it might be worth bumping it up to C if the last note is too low for your congregation.

There are a few common harmonizations of this tune. The first, by William H. Monk, was published in 1861. This can be found in Psalter Hymnal 376 and Presbyterian Hymnal 88. Another harmonization was written by J. S. Bach, taken from his arrangement of the hymn for the St. John Passion. For either of these harmonizations, pull out all the stops on organ and brass. The Psalter Hymnal also includes a more recent double descant on verse three by Randall De Bruyn.

Redeemer Church of Knoxville has a guitar and piano-led folk version of the hymn on their album, "Rise, O Buried Lord", which you can listen to on their website – redeemerknoxville.bandcamp.com. For a hymn that is so well known with organ and brass accompaniment, this folk version works surprisingly well as a joyful, exuberant song of praise. They also extend the hymn by ending with a repeated refrain of “Hosannas.”

There is a popular story about this hymn. Legend has it that while St. Theodulph was still in prison, on a certain Palm Sunday, the King of France, who had put Theodulph in prison, was processing through the streets on his way to the cathedral. As he passed below the prison tower, Theodulph began to sing “All Glory, Laud and Honor.” The king was so moved by his song that he released him and declared that the hymn was to be sung on Palm Sunday every year from then on. While this is most likely nothing but a good story, it shows the popularity of the hymn, and proves an effective teaching tool for children. Hal Hopson turned the story into a 15 minute musical for children called “The Singing Bishop.” This musical works well at the beginning of a service or in lieu of a prelude, after which everyone rises and sings the hymn together. Another short music drama is The Crown and the Cross (A Palm/Passion Sunday Suite with music arranged by Mark Hayes

While this hymn is known as a quintessential processional hymn for Palm Sunday, it could be sung on Easter morning and throughout the Easter season, even on Ascension Sunday, since the last verse says, “to you, now high exalted, our melody we raise.” It is also possible to use the hymn during Advent, when again we wait for and announce the King, “now in the Lord’s name coming.” 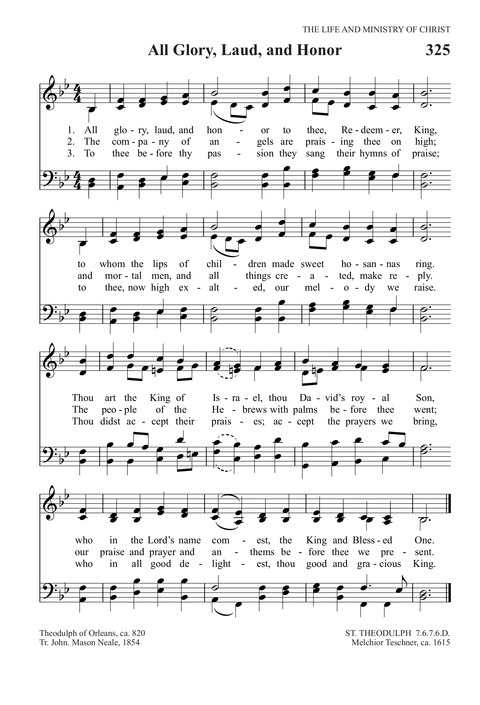 Hymns for a Pilgrim People #178

The Book of Hymns #4

The Hymnal for Worship and Celebration #173