I sing th'almighty power of God

1 We sing the mighty power of God
that made the mountains rise,
that spread the flowing seas abroad
and built the lofty skies.
We sing the wisdom that ordained
the sun to rule the day;
the moon shines full at his command,
and all the stars obey.


2 We sing the goodness of the Lord
that filled the earth with food;
he formed the creatures with his word
and then pronounced them good.
Lord, how your wonders are displayed,
where'er we turn our eyes,
if we survey the ground we tread
or gaze upon the skies.


3 There's not a plant or flower below
but makes your glories known,
and clouds arise and tempests blow
by order from your throne;
while all that borrows life from you
is ever in your care,
and everywhere that we can be,
you, God, are present there.

Written by Isaac Watts (PHH 155), this eight-stanza text originally began "I sing the almighty power of God." The text was published in Divine and Moral Songs far the Use of Children (1715; the first hymnal intended primarily for children) with the heading "Praise for Creation and Providence." The Psalter Hymnal omits the original stanzas 7 and 8 and combines the other six original stanzas into three long ones.

Although it was written for children, this is also a great hymn for adults. The text presents a wonderful view of God's creation sketched in vivid pictorial language. The creation around us is a beautiful panorama that testifies to its Creator, whose power and wisdom (st. 1), goodness and wonders (st. 2), and providence and omnipresence (st. 3) we confess with awe and praise.

Liturgical Use:
On many occasions at the beginning of worship; services that focus on creation and providence (including harvest thanksgiving).

I sing the Almighty [Mighty] power of God. I. Watts. [Praise for Creation and Providence.] Appeared in his Divine Songs for Children, 1715, in 8 stanza of 4 lines, and headed, "Praise for Creation and Providence." Although seldom used in its complete form, arrangements of the text, varying in the number of stanzas taken, are in common use in all English-speaking countries. It is sometimes given as "I sing the mighty power of God," but this reading is not popular.

All tunes published with 'I sing th'almighty power of God'^ top

In this hymn, we extol the power, wisdom, and goodness of God as seen in the created order. We recognize that it is God who has made all these beautiful wonders, and that it is He who keeps the world in order through His ever-present care.

Isaac Watts wrote the original text for this hymn in eight four-line stanzas for his Divine Songs Attempted in Easy Language, for the Use of Children, published in 1715. It was the second song in the collection, under the title “Praise for Creation and Providence.” In his preface, Watts wrote, “the Children of high and low degree, of the Church of England, or Dissenters, baptized in infancy, or not, may all join together in these Songs. And as I have endeavored to sink the language to the level of a Child’s understanding, and yet to keep it (if possible) above contempt: so I have designed to profit all (if possible) and offend none.”

A standard modern text has developed from Watts's eight four-line stanzas. Most modern hymnals include three eight-line stanzas, which are composed of Watts's first through fifth and seventh stanzas. His seventh stanza is normally rewritten. The original reads:

Creatures (as numerous as they be) Are subject to thy care; There’s not a place where we can flee, But God is present there.

The modern version, which is the second half of stanza 3, is:

While all that borrows life from Thee Is ever in Thy care, And everywhere that we can be, Thou, God, art present there.

A few modern hymnals say “We sing” instead of “I sing,” which emphasizes that it is the community who worships, not just the individual. Some hymnals also modernize the pronouns and employ gender-neutral language.

The themes of the text are creation and God's power. Through the first stanza and the first half of the second, Watts lists the acts of creation in biblical order (see Genesis 1). In the second half of the hymn, he goes on in praise and amazement at how God keeps everything in order.

This hymn has two tunes in common use. One is the anonymous tune ELLACOMBE, which has a German Roman Catholic origin. A tune with some resemblance to our modern one was published in 1784 in a chapel hymnal for the Duke of Württemberg. Various German hymnals published variants on that tune throughout the early part of the nineteenth century. One source with a version much closer to the modern one is Vollständige Sammlung der gewöhnlichen Melodien zum Mainzer Gesangbuche, published in Mainz in 1833. This tune reached the English-speaking world through its publication in the 1868 appendix to Hymns Ancient and Modern, in an arrangement by W. H. Monk. ELLACOMBE is the name of a village in Devonshire, England, but any connection between the village and the tune is unknown. This tune is cheerful and buoyant, yet restrained. It works well when sung in harmony.

The other tune used with this text is FOREST GREEN, which was arranged by Ralph Vaughan Williams from his transcription of a man singing the folk song, “The Ploughboy's Dream,” in the village of Forest Green in Surrey. FOREST GREEN was originally set to “O Little Town of Bethlehem” in the English Hymnal (1906). This simple tune is repetitious (the first, second, and fourth lines are identical) and easy to learn. The tempo must be moderate, to prevent it from dragging along mournfully or galloping ahead.

This hymn is suitable for any time of year. It could be used for a service focusing on the theme of Creation or the power of God. While the hymn was originally written for children, many modern hymnals do not include a section of children's songs, and so this hymn is used just as often by adults. In light of the original intent of the song, a children's choir could sing the hymn straight through using the tune FOREST GREEN, perhaps preceded by a brief piano arrangement such as is found in the collection “Morning Has Broken.” ELLACOMBE expresses well the power and majesty of God seen in creation, as is shown in instrumental arrangements such as “I Sing the Mighty Power of God,” a brass duet with piano accompaniment for trumpet and trombone. A driving setting for organ and piano duet with optional handbells and choir is “I Sing the Mighty Power of God,” based on ELLACOMBE. A grand arrangement of ELLACOMBE for choir, organ, brass, and timpani is also titled “I Sing the Mighty Power of God.” The organ collection “When Morning Gilds the Skies” includes organ settings of both FOREST GREEN and ELLACOMBE. 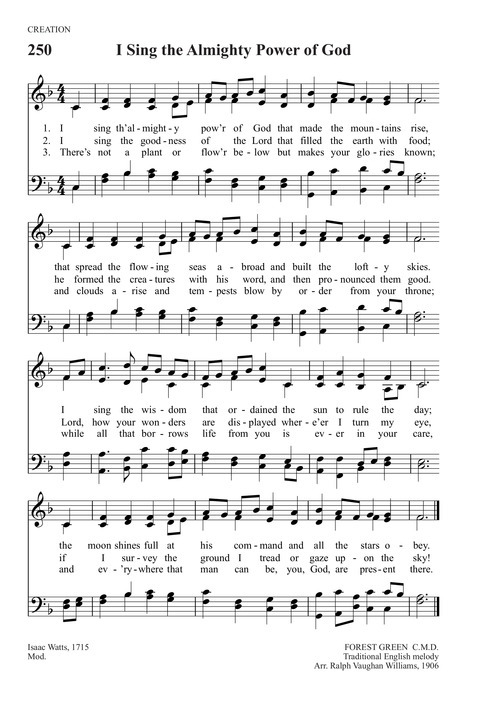 A New Hymnal for Colleges and Schools #62

Hymns for a Pilgrim People #39

Hymns of the Christian Life #21

Hymns to the Living God #53

Praise! Our Songs and Hymns #9

Psalms and Hymns and Spiritual Songs #8

The Hymnal for Worship and Celebration #59

The Liturgical Harp #33b