In the Quiet Consecration 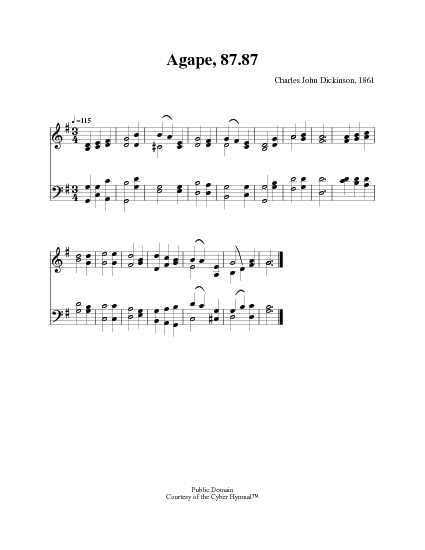 In the quiet consecration

1 In the quiet consecration
of this glad communion hour,
here we rest in you, Lord Jesus,
taste your love and touch your power.


2 Christ, the living bread from heaven,
Christ, whose blood is drink indeed,
here by faith and with thanksgiving,
in our hearts on you we feed.


3 By your death for sin atoning,
by your resurrection life,
hold us fast in joyful union;
strengthen us to face the strife;


4 while in joyful holy radiance
shines the feast that is to come
after conflict, toil, and testing
your great feast of love and home!

This fine Lord's Supper hymn combines a number of important images: intimate union with Christ (st. 1), participation in the sacrament "by faith and with thanksgiving" (st. 2), the support and strength of Christ's resurrection life (st. 3), and the sacrament's foretaste of the heavenly feast with the Lamb (st. 4). Gently but firmly supported by the tune KINGDOM, the reflective text is for "quiet consecration" and meditation. The song also stands out as a Lord's Supper hymn with an apocalyptic focus.

Constance H. Coote (b. England, 1844; d. Turnbridge Wells, Kent, England, 1936) wrote "In the Quiet Consecration" in 1910 and first published it in her At His Table (1913); later the hymn found wider circulation when published in The Church Hymnal for the Christian Year (1917).

Although Coote spent much of her life as a single woman and a widow, she is known mainly because of her marriage to Algernon Coote, a pastor who later became Sir Algernon, a baronet. Throughout her life she wrote hymns and other devotional poetry.

Liturgical Use:
During the Lord's Supper.

KINGDOM features a gentle melodic contour and subtle changes in rhythmic structure (that soften the trochaic meter of the text. Sing this tune in harmony and in two long lines. This communion hymn can be framed by the equally meditative "Alleluia" (see 640). Good singers may improvise additional par…

All tunes published with 'In the Quiet Consecration'^ top