Christ the Lord is risen today

EASTER HYMN originally appeared in the John Walsh collection Lyra Davidica (1708) as a rather florid tune. Tempered to its present version by John Arnold in his Compleat Psalmodist (1749), EASTER HYMN is now one of the best and most joyous Easter tunes.

Composed by Paul Sjolund (b. Minneapolis, MN, 1935), the descant comes from Hymns for the Family of God (1976), which also provides additional parts for two trumpets. A composer, conductor, and festival director, Sjolund has had several hundred of his compositions published. He was minister of music at two Los Angeles churches: Bel Air Presbyterian Church (1959-1968) and La Canada Presbyterian Church (1968-1980). He has also been a consultant and contributor to several modern hymnals.

Wonderfully decorating the "alleluias," the melismas add a depth to our praise that spoken "alleluia" cannot approximate (and that can be exceeded only by dancing such "alleluias"). The structure of text and music invites antiphonal performance. Try having small groups sing Wesley's words and the entire group sing the "alleluias." If the congregation wants to sing the entire hymn–and it often does–organists could point out the antiphonal character by playing the regular lines with a lighter accompaniment or unison melody on some stanzas, and by changing to full organ and/ or harmony for the "alleluias." Be sure to add the descant, especially on stanza 5, perhaps taking that stanza a bit slower.

Text: Lord, Remove the Veil Away 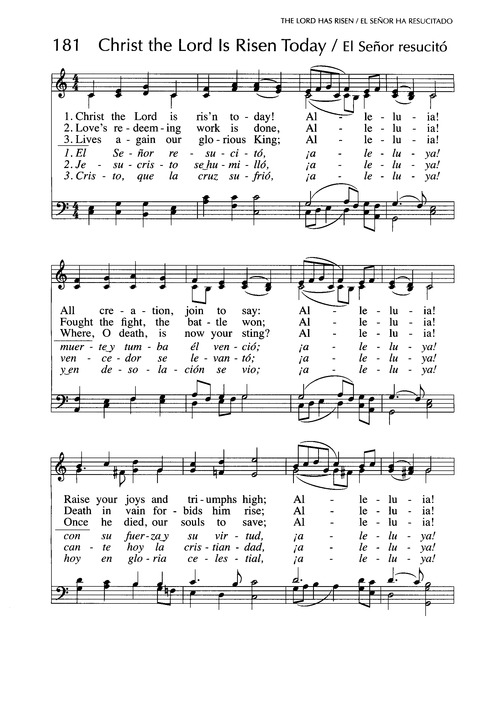 Hymns for a Pilgrim People #196

The Hymnal for Worship and Celebration #217

Include 184 pre-1979 instances
All instances^ top
Suggestions or corrections? Contact us