1 O sons and daughters of the King,
whom heavenly hosts in glory sing,
today the grave has lost its sting.
Alleluia!


2 That Easter morn at break of day,
the faithful women went their way
to seek the tomb where Jesus lay.
Alleluia!


3 An angel clad in white they see,
who sat and spoke unto the three,
"Your Lord has gone to Galilee."
Alleluia!


4 When Thomas first the tidings heard
that some had seen the risen Lord,
he doubted the disciples' word.
Lord, have mercy!


5 At night the apostles met in fear;
among them came their Master dear
and said, "My peace be with you here."
Alleluia!


6 "My pierced side, O Thomas, see,
and look upon my hands, my feet;
not faithless but believing be."
Alleluia!


7 No longer Thomas then denied;
he saw the feet, the hands, the side.
"You are my Lord and God!" he cried.
Alleluia!


8 How blest are they who have not seen
and yet whose faith has constant been,
for they eternal life shall win.
Alleluia!

This hymn was written in Latin by Franciscan (Minorite) friar Jean Tisserand (b. France, 15th century; d. 1494); it was found in an untitled booklet printed in Paris between 1518 and 1536. Tisserand's text, which began "O filii et filiae, Rex coelestis," was preceded by three "alleluias" and concluded by one. Several additional Latin stanzas were added at a later date. A popular preacher, Tisserand also composed other hymns in French and Latin. In 1492 he founded the Refuge of St. Madeleine, an institution for the rehabilitation of prostitutes.

John M. Neale (PHH 342) translated the text into twelve stanzas, which were published in his Medieval Hymns and Sequences (1851). That translation appeared in an altered form in Hymns Ancient and Modern (1861) and in various other hymnals. Neale's stanzas 1, 3, 5-7, and 8-10 form the present text.

Liturgical Use:
Because the narrative covers two Easter season Sundays, the stanzas can be divided as follows: for Easter Sunday morning, stanzas 1-3, 5, and 8; for Easter evening, stanzas 1-4 and 8; for the Sunday after Easter (which usually includes the doubting Thomas story), Stanzas 1 and 4-8. Stanza 8 is appropriate at any time as a sung beatitude.

All tunes published with 'O Sons and Daughters, Let Us Sing!'^ top

This hymn tells the story of those who witnessed the resurrected Christ based on the gospel accounts, particularly that of John. After describing the scene at the tomb on Resurrection Sunday morning, the text narrates the disciples' responses, from the sudden appearance of Jesus in a locked room where a group of them were meeting (John 20:19-23) to the proof of Jesus' physical resurrection when He appeared to doubting Thomas (John 20:23-29).

The Latin original text of this hymn is usually attributed to a French Franciscan monk named Jean Tisserand in the fifteenth century, though some scholars think it may have been a French Dominican bishop named Jehan Tisserand in the early sixteenth century. The first known publication of the text was in an untitled booklet in Paris between 1518 and 1536. Other Latin stanzas were also added at a later date. John Mason Neale translated the hymn into English in 1851.

This text appears in nine or ten stanzas in most hymnals. Some divide these stanzas into two separate hymns with the same tune, but most include all the stanzas in one entry. The reason some hymnals divide the text is that the first part of the hymn tells the story of the scene at the tomb on Resurrection Sunday, while the second part tells the story of the disciples' response to the news from John 20:19-29. A refrain of jubilant alleluias opens and closes the hymn.

O FILII ET FILIAE takes its name from the first words of the Latin text. It may have originated as a chant tune or as a French folk melody, but there is no scholarly consensus on the issue. Either source of the tune would mean unison singing is more appropriate to the original style than the four-part setting of the earliest publication in 1623 in Paris. Most hymnals have a rhythmic, four-part setting, but a few also include a chant-style unison version. The triple meter of the tune and the joyful theme of the text call for an upbeat tempo. Use full accompaniment on the alleluias.

The narrative of the text is appropriate for services where the gospel reading is from an account of the Resurrection or the story of Thomas. For an Eastertide service, try singing with light accompaniment from tambourine and handbells, as in the polyphonic choral setting of “O Sons and Daughters.” Another arrangement of “O Sons and Daughters” is an a capella choral arrangement which alternates between a chant-like unison setting of the tune and a simple four-part harmonization, lending some variety to the long text. Keyboard and flute accompaniment support a combined setting of this gospel narrative and Psalm 118 called “Easter Alleluia,” in which the congregation and choir alternate with the cantor. 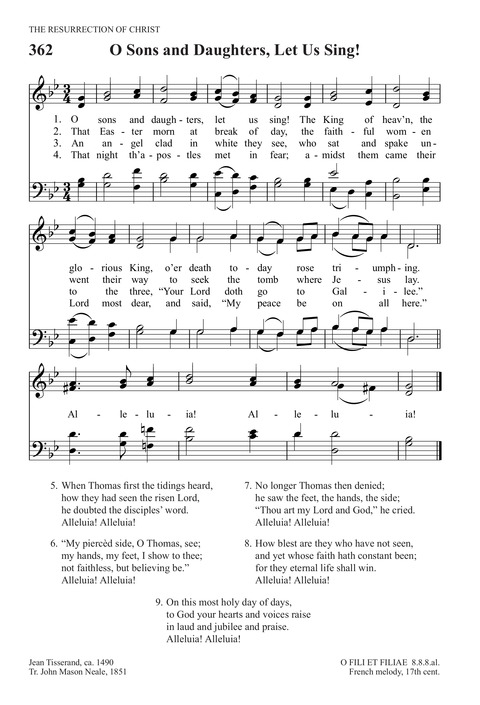 Hymns of Glory, Songs of Praise #431a

Hymns of Glory, Songs of Praise #431b

The New English Hymnal #125a

The New English Hymnal #125b