Love divine, all loves excelling, Joy of heaven, to earth come down

1 Love divine, all loves excelling,
joy of heav’n, to earth come down,
fix in us thy humble dwelling,
all thy faithful mercies crown.
Jesus, thou art all compassion,
pure, unbounded love thou art.
Visit us with thy salvation;
enter ev'ry trembling heart.


2 Breathe, O breathe thy loving Spirit
into ev’ry troubled breast.
Let us all in thee inherit,
let us find the promised rest.
Take away the love of sinning;
Alpha and Omega be.
End of faith, as its beginning,
set our hearts at liberty.


3 Come, Almighty, to deliver,
let us all thy life receive.
Suddenly return, and never,
nevermore they temples leave.
Thee we would be always blessing,
serve thee as thy hosts above,
pray, and praise thee without ceasing,
glory in thy perfect love.


4 Finish, then, thy new creation;
true and spotless let us be.
Let us see thy great salvation
perfectly restored in thee.
Changed from glory into glory,
till in heav’n we take our place,
till we cast our crowns before thee,
lost in wonder, love and praise.

Considered by many to be among Charles Wesley's (PHH 267) finest texts, "Love Divine" was published in four stanzas in his Hymns for those that seek, and those that have Redemption in the Blood of Christ (1747). Many hymnals, including the Psalter Hymnal, omit the original second stanza, which contained the questionable line "take away our power of sinning." A verse from John Dryden's poem beginning with the words "Fairest isle, all isles excelling" used by Henry Purcell in his opera King Arthur were undoubtedly Wesley's inspiration for writing this text. In fact, "Love Divine" was set to a Purcell tune in John and Charles Wesley's Sacred Melody (1761).

Addressed to Christ, this text begins as a prayer for the indwelling of his love in our lives: "fix in us thy humble dwelling" and "let us all thy life receive" (st. 1-2). A tone of praise and adoration runs throughout the text. But the final stanza is clearly a prayer for sanctification, for consistently holy lives. Though this stanza was an outcome of the Specifically Wesleyan doctrine of perfection, it is our fervent Christian prayer that our sanctification will ultimately lead to glorification. As is customary in a Charles Wesley text, biblical allusions abound.

Liturgical Use:
As a sung prayer, probably towards the end of the service or, given its tone of praise, as a closing hymn; Advent.

Love Divine, all loves excelling. C. Wesley. [The Love of Christ.] First published in Hymns for those that Seek, and those that Have Redemption, 1747, No. 9, in 4 stanzas of 8 lines (Poetical Works, 1868-72, vol. iv. p. 219). In 1780 it was included, with the omission of stanza ii., in the Wesleyan Hymn Book, No. 374, and in this form it has passed into a large number of hymn-books in all English-speaking countries. It had previously appeared in full in M. Madan's Psalms & Hymns, 1760; A. M. Toplady's Psalms & Hymns, 1776, and other hymn-books of the Church of England. The two forms, the full and the abridged, have thus come into common use. Tested by its use it is found to rank with the best of its author's work. Mr. G. J. Stevenson has an interesting note thereon in his Methodist Hymn Book Notes, 1883, p. 266.

John Zundel's BEECHER (named after Henry Ward Beecher, his pastor) was first published in his Christian Heart Songs (1870) as a setting for Charles Wesley's "Love Divine, All Loves Excelling" (568). The tune is also known as ZUNDEL. Approximating the shape of a rounded bar form (AA'BA'), BEECHER is…

All tunes published with 'Love Divine, All Loves Excelling'^ top

On April 29, 2011, millions of people around the world turned on their televisions to watch one of the most anticipated spectacles of the year: the wedding of Prince William and Kate Middleton. The ceremony featured a number of hymns, one of which was “Love Divine, All Loves Excelling,” a hymn that is both appropriate and seemingly paradoxical for a wedding. This ceremony was so celebrated because it represented the “dream” for romance - a prince finding his princess, true loves coming together, and a couple rising above the odds to be together. This, we argue so easily, is love. And yet this hymn reorients us to see that this beautiful wedding and marriage is only, and can only ever be, a reflection of the Love above all loves. We are only able to love one another because Christ first loved us. God is love, and we are the mirrors and bearers of that love to each other. Let us pray that we would continually be filled with Love, that we might bless each other, and become more and more like He who loves us.

This hymn is considered by many to be one of Charles Wesley’s finest texts, and is one of his most popular hymns. It is believed that his first line was inspired by a line from a John Dryden poem used in Henry Purcell’s opera King Arthur, which begins, “Fairest Isle, all Isles excelling, Seat of Pleasures and of Loves.”

The hymn is in fact a prayer: through the incarnated Christ, we pray for the indwelling of the Holy Spirit, and ask that we would never be separated from the love of God in Christ, who works in us and through us until our time on earth is done. Wesley’s fourth stanza caused a rather ferocious controversy. The line, “Pure and spotless let us be” was indicative of the Wesleyan belief in earthly perfection, which got them into trouble with Christians of a more conservative leaning. However, as the Psalter Hymnal Handbook expresses, “it is our fervent Christian prayer that our sanctification will ultimately lead to glorification,” and the line should not cause any discomfort. Some hymnals also leave out the second stanza, with the line, “Take away our bent to (power of) sinning.”

There are three popular tunes for this hymn. The first is BEECHER, composed by John Zundel in 1870 for this text. This is a well-loved and oft-used tune, but it presents one fault in what Paul Westermeyer describes as a “yowl” of the upward major sixth between the first and second measure (Let the People Sing, 316). So be careful to glide into that note gracefully. A second tune is the beloved Welsh HYFRYDOL, by Rowland Hugh Pritchard, commonly sung to “Alleluia, Sing to Jesus” and “I Will Sing of My Redeemer.” BLAENWERN, another Welsh tune, composed by William Penfro Rowlands, is most popular in Great Britain.

This hymn is in fact a sung prayer, and so can be sung as a hymn of invocation, as a response to a Scripture passage or text about Christ’s work in our lives, or at the close of a service. It would be particularly fitting during the Advent season, a time in which we ask God to continue working in and through us to bring about His kingdom. 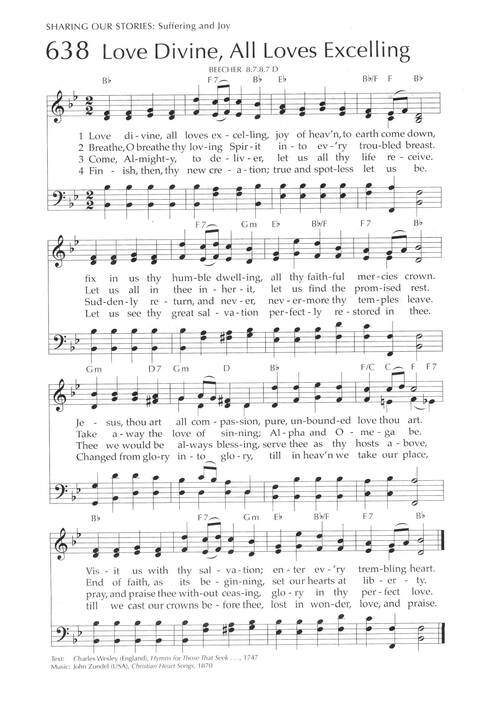 Ancient and Modern #721b

Great Songs of the Church (Revised) #267

Hymns for a Pilgrim People #48

Hymns of the Christian Life #180

Praise! Our Songs and Hymns #31

Sacred Selections for the Church #260

Display Title: Love Divine, All Loves Excelling First Line: Love divine, all loves excelling Tune Title: BEECHER Author: Charles Wesley Source: Hymns for Those that Seek and Those That Have Re­demp­tion in the Blood of Je­sus Christ, 1747
The Cyber Hymnal #3606

The Hymnal for Worship and Celebration #92

The Irish Presbyterian Hymbook #509a

The Irish Presbyterian Hymbook #509b

Include 1662 pre-1979 instances
All instances^ top
Suggestions or corrections? Contact us