Lift up your heads, ye mighty gates, Behold the King of glory waits

1 Lift up your heads, ye mighty gates;
behold, the King of glory waits;
the King of kings is drawing near;
the Savior of the world is here!


2 Fling wide the portals of your heart;
make it a temple, set apart
from earthly use for heaven's employ,
adorned with prayer and love and joy.


3 Redeemer, come, with us abide;
our hearts to thee we open wide;
let us thy inner presence feel;
thy grace and love in us reveal.


4 Thy Holy Spirit lead us on
until our glorious goal is won;
eternal praise, eternal fame
be offered, Savior, to thy name!

Weissel, Georg, son of Johann Weissel, judge and afterwards burgomaster at Doranau, near Königsberg, was born at Domnau in 1590. He studied at the University of Königsberg, from 1608 to 1611, and thereafter, for short periods, at Wittenberg, Leipzig, Jena, Strassburg, Basel and Marburg In 1614 he was appointed rector of the school at Friedland near Domnau, but resigned this post after three years, and returned to Königsberg to resume his studies in theology. Finally, in 1623, he became pastor of the newly erected Altrossgart church at Königsberg, where he remained till his death, on August 1, 1635. Weissel was one of the most important of the earlier hymn-writers of Prussia. His hymns, about 20 in all, are good in style, moderate in le… Go to person page >
^ top

All tunes published with 'Lift Up Your Heads, Ye Mighty Gates'^ top

Psalm 24 is a majestic song of praise to the King of glory. It concludes with a herald’s announcement of the King’s approach: “Lift up your heads, you gates; lift them up, you ancient doors, that the King of glory may come in. Who is he, this King of glory? The Lord Almighty—he is the King of glory” (Psalm 24:9-10 NIV). As this hymn is sung, contemplate how we can prepare our hearts for Christ’s Second Coming.

Georg Weissel, a seventeenth-century German pietist, is the author of the original text for this hymn based on Psalm 24. Written for the first Sunday of Advent, it was first published in Preussiche Fest-Lieder in 1642. Catherine Winkworth translated it into English and published it in her Lyra Germanica in 1855. She revised her translation for publication in her Chorale Book for England in 1863.

The declaration of the glory of God the King is the main theme of this hymn. The fifth of the original stanzas is a prayer addressed to God asking for His presence in one’s heart.

There are several tunes to choose from in singing this hymn. The most common choice is TRURO, an anonymous tune first published in 1789 in Psalmodia Evangelica by Thomas Williams. It has been attributed to several people, including George F. Handel, but no definite evidence has been found for such claims. This tune is named after a city in Cornwall, but there is no known connection between the two. This tune is in the shorter meter, as is WAREHAM.

The second most popular tune is MACHT HOCH DIE TÜR, named after the German text of the hymn. It is in the longer meter, like the original text of the hymn and the alternate tune MILWAUKEE. An interesting fact is that Lutheran hymnals that include this hymn tend to have two settings, one for each of these longer tunes.

This hymn was originally written for Advent, but is also used for Palm Sunday. In either season, this hymn is appropriate for hailing the coming of King Jesus. Two instrumental arrangements designed for these seasons are “Ride On!”, a medley of three Palm Sunday tunes for handbells or handchimes with TRURO, and the arrangement of MACHT HOCH DIE TÜR in “Seven Christmas Fantasias for Piano with Violin.” To add interest to congregational accompaniment, “Introductions, Interludes, and Codas, set 4” for organ includes two settings of MILWAUKEE and one of WAREHAM. A choral arrangement that fully exploits the majestic theme of the hymn is “He Is the King of Glory,” which combines two texts based on Psalm 24 – this hymn (set to TRURO) and George F. Handel’s majestic chorus “Lift Up Your Heads” from Messiah, which has the same opening rhythmic motif as TRURO. 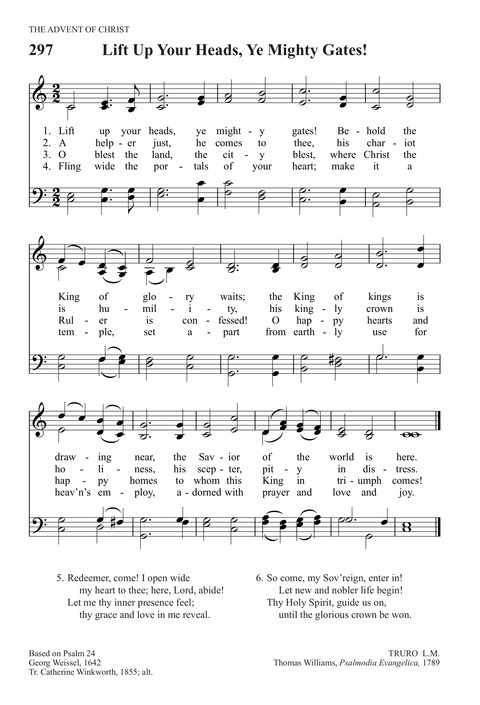 A New Hymnal for Colleges and Schools #30

Hymns for a Pilgrim People #85

The Book of Common Praise of the Reformed Episcopal Church #15