1. Come, thou long expected Jesus,
born to set thy people free;
from our fears and sins release us,
let us find our rest in thee.
Israel's strength and consolation,
hope of all the earth thou art;
dear desire of every nation,
joy of every longing heart.


2. Born thy people to deliver,
born a child and yet a King,
born to reign in us forever,
now thy gracious kingdom bring.
By thine own eternal spirit
rule in all our hearts alone;
by thine all sufficient merit,
raise us to thy glorious throne.

Charles Wesley (PHH 267) wrote this Advent hymn and printed it in his Hymns for the Nativity of our Lord (1744). Like so many of Wesley's texts, "Come, Thou Long-Expected Jesus" alludes to one or more Scripture passages in virtually every phrase. The double nature of Advent is reflected in this text, in which we remember Christ's first coming even while praying for his return. Stanzas 1 and 2 recall Advent prophecies in the Old Testament; stanza 3 speaks of Christ's birth and kingdom, and stanza 4 is a prayer for Christ's rule in our hearts.

Come, Thou long expected Jesus. C. Wesley. [Christmas.] Appeared in Hymns for the Nativity of Our Lord, 1744, No. x., in 2 stanzas of 8 lines. The tract in which it appeared formed the first of those called the "Festival Hymns," which were subsequently published by Lampe in 1746. It was not included in the Wesleyan Hymn Book until the revised edition of 1875, No. 688, although it was given by Whitefield in his Collection, 1753, and later editions; by Madan, in his Psalms & Hymns, 1760; by Toplady, in his Psalms & Hymns, 1776; and by others. It is found in a great number of hymnals in Great Britain and America, specially those of the Church of England, and usually without alteration, as in Hymnal Companion, No. 96. A marked departure from this rule is, "Come, O Saviour, long expected," which appeared in Hall’s Mitre, 1836, in 4 stanzas of 4 lines, and again in the New Mitre, 1875, in 6 stanzas, the last two stanzas being Edward Osier's doxology, "Worship, honour, glory, blessing," from the older Mitre, 1836, No. 282. Other altered forms are, "Come, Thou Saviour, long expected," in Kennedy, 1863, No. 89, "Hail, Thou long expected Jesus," in the American Protestant Episcopal Hymnal, 1871. Original text, Poetical Works, 1868-72, vol. iv. p. 116.

STUTTGART was included in Psalmodia Sacra (1715), one of the most significant hymnals of the early sixteenth century [sic: eighteenth century]. Christian F. Witt (b. Altenburg, Germany, e. 1660; d. Altenburg, 1716) was an editor and compiler of that collection; about 100 (of the 774) tunes in that c…

All tunes published with 'Come, Thou long expected Jesus'^ top

In one of his many “Coop’s Columns” on the Calvin Institute of Christian Worship website, former Calvin College chaplain, Dale Cooper, recalls a moment in which he was travelling home to his young family after spending the summer in Geneva. He was calling his wife from Chicago’s O’Hare airport to arrange his pick-up in Grand Rapids, when his then four-year-old son asked for the phone. Cooper writes, “His only words to me— a sigh, really: ’Daddy, when am I going to be where you are?’” (Cooper, “Coop’s Column – Spirit at Work: Guarantor”).

Wesley’s original text consisted of two stanzas of eight lines each. In some hymnals, where the tune STUTTGART is used, those two verses are broken into four verses of four lines. The text is almost exactly the same in every hymnal that includes this hymn.

There are a few points of interest to note about Wesley’s text. First, he used a number of “false rhymes” when he got himself in a corner lyrically: “Jesus-release us,” “deliver-forever,” and “Spirit-merit.” Wesley was quite clever in these – one generally doesn’t notice them unless they’re pointed out. Second, Wesley uses a lot of repetition to make some key themes more obvious. For example, in the second stanza, he repeats the word “born” at the beginning of three consecutive lines to really drive home the idea of the incarnation.

Two tunes commonly accompany this text. The first is STUTTGART, a tune attributed to Christian F. Witt in the eighteenth century. Hymnologist Paul Westermeyer describes this tune as a “bold and sturdy congregational melody that stands on its own and bears repetition” (Westermeyer, Let the People Sing, 149). Note that this melody requires you to divide the original two stanzas into four. The second tune often used is HYFRYDOL, a Welsh tune composed by Rowland Prichard in 1830, and commonly associated with “Love Divine, All Loves Excelling.” Chris Tomlin’s Christmas album Glory in the Highest has an excellent a cappella rendition of the hymn to this tune. Singing the piece slowly and a cappella with the congregation is a powerful way of expressing the simple longing the text evokes.

Sandra McCracken and Derek Webb have written a new tune for the hymn with a one-line chorus: “Come thou long-awaited Emmanuel.” This is a folksy guitar-driven tune that also splits the two verses into four. I also recommend using the tune NETTLETON, most commonly sung with the text “Come Thou Fount of Every Blessing.” Accompany with piano, violin, and a marching drum beat on the snares. With this tune it’s possible to repeat the first half of the first verse at the end, with just a sustained violin line, ending on the words, “Let us find our rest in thee.”

This is a beautiful hymn for Advent that expresses deeply the two-fold purpose of the Advent season – we remember the birth of Christ, and fiercely desire His coming again. Perhaps more than some Advent hymns, this text especially expresses our longing for Christ's second coming. You could pair this hymn with other songs of longing such as “Wait for the Lord” and “All who are Thirsty.” This would also be a powerful hymn with which to end a service, especially a service of lament over the brokenness in our world. After crying out and naming our concerns and heartbreaks before God, how beautiful to close with this simple prayer of longing that also speaks of our hope. There is no sense in asking for something if we do not believe we could ever get it. Even as we express our need for consolation, we do so in the knowledge that our God is a God who consoles. Ending the service with this hymn would be especially powerful if you repeated the first four lines of the first verse, ending your time of worship with “Let us find our rest in thee.” 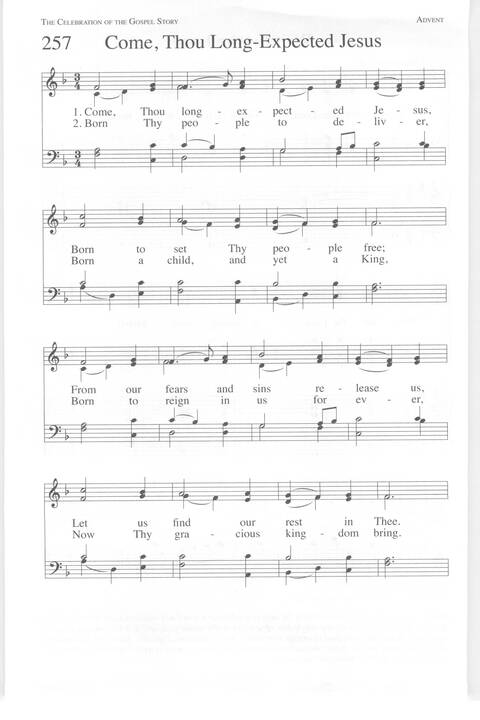 A New Hymnal for Colleges and Schools #212

Hymns and Psalms #81a

Hymns and Psalms #81b

Hymns for a Pilgrim People #89

Hymns to the Living God #91

The Book of Common Praise of the Reformed Episcopal Church #1

The Hymnal for Worship and Celebration #124

The Liturgical Harp #11a

The New English Hymnal #3a

The New English Hymnal #3b

The Song Book of the Salvation Army #79

Include 593 pre-1979 instances
All instances^ top
Suggestions or corrections? Contact us