Hymns for the Living Church

Dorothy Ann Thrupp was born in London, June 10, 1779. She contributed some hymns, under the pseudonym of "Iota," to W. Carus Wilson's Friendly Visitor and his Children's Friend. Other hymns by her, signed "D.A.T.," appeared in Mrs. Herbert Mayo's Selection of Hymns and Poetry for the Use of Infant Schools and Nurseries, 1838. She was also the editor of Hymns for the Young, c. 1830, in which all the hymns were given anonymously. She died in London on December 15, 1847. --The Hymnal 1940 Companion… Go to person page >
^ top

The text of "Savior, Like a Shepherd Lead Us" first appeared in Hymns for the Young, 1840, which was edited by Dorothy Ann Thrupp (1779-1847). Although no author's name appears with the text, it is thought that Thrupp wrote it, since she often published hymns anonymously, under the pseudonym "Iota," or simply using her initials.

The tune we sing today was written by William Bradbury expressly for this text and appeared in his Sunday School collection, Oriola, 1859. Bradbury was a protege of the great music educator, Lowell Mason. Bradbury sang in Mason's Bowdoin Street Church choir and Boston Academy of Music as a youth, and later started similar church and school music programs in New York where he served as organist at First Baptist Church. Beyond his work as an educator and church musician, Bradbury studied composition in Europe, founded the Bradbury Piano Company with his brother, and edited a number of music books. Bradbury is probably most famous for writing the music to "Jesus Loves Me."

It's interesting that "Savior, Like a Shepherd Lead Us" was originally intended for children. In fact, many classic hymns like "Morning Has Broken" and "All Things Bright and Beautiful" were originally written for youth. Certainly this proves that educating our children and creating lasting music need not be mutually exclusive goals! --Greg Scheer, 1997

Saviour, like a Shepherd, lead us. [The Good Shepherd.] The authorship of this hymn is a matter of some doubt. The earliest source to which we have traced it is Miss D. A. Thrupp's Hymns for the Young, 4th edition 1836, in 4 stanzas of 6 lines, where it is unsigned. We next find it in the Rev. W. Carus Wilson's Children's Friend for June, 1838, again in 4 stanzas of 6 lines, and signed “Lyte." In the January number of the same magazine there is a National Hymn in the metre of "God save the Queen" ("Lord, Thy best blessing shed"), which is signed "H. Lyte," and dated from "Brixham".

"Saviour, like a Shepherd, lead us" appears again in 1838, in Mrs. Herbert Mayo's Selections of Hymns and Poetry for the use of Infant and Juvenile School, No. 171; and again in the edition of 1846, but without signature. As in that collection several hymns and poems are signed "D. A. T.," it is clear that Mrs. Mayo did not regard the hymn as Miss Thrupp's production. The most that we can say is that the evidence is decidedly against Miss Thrupp, and somewhat uncertain with regard to Lyte as the writer of the hymn. Its use is extensive both in G. Britain and America. [William T. Brooke]

All tunes published with 'Savior, Like a Shepherd Lead Us'^ top

Many versifications of Psalm 23 act as hymns of assurance and confessions of trust. We know the text well – “The Lord is my shepherd, I shall not want.” This text, attributed to Dorothy Thrupp, differs from those texts. Rather than an assertion of our faith, it is a prayer that stems from our faith. It goes, if you will, a step further than the psalm’s declaration. We know that God is our Shepherd. We know why we trust. And because we have that trust, we ask that God be faithful. We acknowledge our dependency and our emptiness, and ask that God would provide. We ask not in doubt, but in faith. Every verse of this hymn contains a promise we have from God, and a prayer we make because of that promise. This is how we are called to live our lives as followers of Christ – in prayer, because of faith. Thrupp’s text is a beautiful example of how we might live out that calling.

There is some contention as to who wrote this hymn text. Some attribute it to Henry F. Lyte, and others to Dorothy A. Thrupp. Most people lean towards Thrupp, since it appeared in a hymnal she edited, and since she often published hymns anonymously. According to hymnologist Albert Bailey, the text is “largely on the child’s level,” the only theological suggestion found in this hymn being, “Thou has bought us.” The rest, he argues, is a poetic rendering of ideas found in Ps. 23 (The Gospel in Hymns, 184). And he is entirely correct. This hymn was originally written for children, so it makes sense that it’s on a “child’s level.” While he might criticize the lack of theological insight, the way Thrupp took a familiar image like the Shepherd in Psalm 23 and spun it to provide us with words of prayer is brilliant.

William Bradbury wrote his self-named tune, BRADBURY, expressly for this text, and it is still the most common tune we sing with Thrupp’s text today. It might not be one of the most inspiring tunes ever written, but it is sung with much gusto and love by congregations. Other tune options include RHUDDLAN or PICARDY. Leigh Nash, best known as the lead singer of Sixpence None the Richer, has a recording of the hymn on her album Hymns & Sacred Songs with a fabulous modern folk tune that would be very easily adaptable for congregational singing.

This hymn could be sung during any point in the liturgical year, but would be especially fitting in a service themed on trust in God. Examples could be a New Year’s Day service or a baptism service. It would be powerful after the prayer of confession and assurance of pardon, after a reading of Psalm 23, or as a hymn of response after a sermon about trust or Psalm 23.

Hymns for the Living Church #321 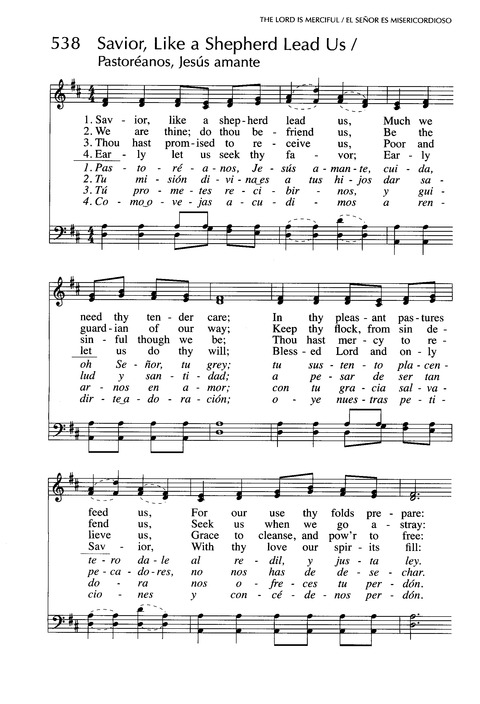 Hymns for a Pilgrim People #431

Hymns of the Christian Life #344

Sacred Selections for the Church #165

The Hymnal for Worship and Celebration #462

The Song Book of the Salvation Army #845