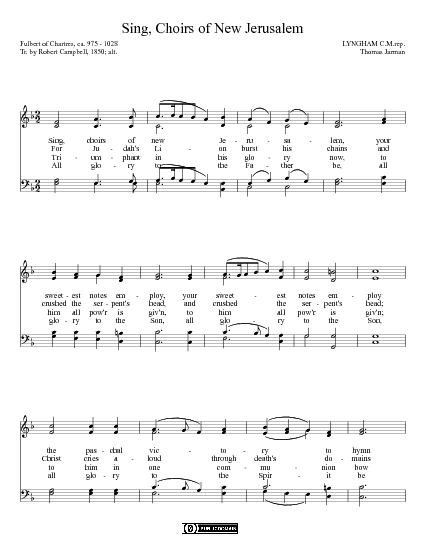 Robert Campbell was an advocate residing in Edinburgh. He is not much known as an author, but some of his hymns have been adopted in several hymnals. He was Roman Catholic. His death occurred in 1868. --Annotations of the Hymnal, Charles Hutchins, M.A. 1872.… Go to person page > 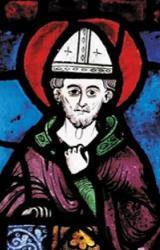 Fulbert of Chartres, Saint and Bishop (St. Fulbertus Carnotensis), flourished in the 11th century, having been consecrated Bishop of Chartres (probably) in 1007, and dying on April 10th, 1028. His collected works were published at Paris in 1608, but with the exception of one hymn, "Chorus novae Hierusalem" (q.v.), are very little known. That hymn in its original Latin form was included in the Sarum Breviary, and, in one English form or another, finds a place in most of our English Hymnals as "Ye choirs of New Jerusalem." [Rev. Digby S. Wrangham, M.A.] --John Julian, Dictionary of Hymnology  Go to person page >
^ top

Written in Latin by Bishop Fulbert of Chartres (b. Italy, c. 960; d. Chartres, France, 1028) early in the eleventh century, this Easter text originally began "Chorus novae Jerusalem." The text was used in British cathedrals and monasteries during the Easter season.

After studying at Rheims, Fulbert became head of the Cathedral School in Chartres. He lectured on various subjects, including medicine, and was able to attract many well known scholars to the school; thus the Chartres institution was one of the best schools of its time. Appointed bishop of Chartres in 1007, Fulbert entered into the political and theological controversies of his day. He left a substantial body of writings, including hymns, some of which were used in the British medieval Sarum Breviary.

Robert Campbell's English translation in six stanzas, which originally began “Ye choirs of new Jerusalem,” was published in Campbell's Hymns and Anthems (1850). The original stanzas 3 and 5 are omitted. Referring to the songs of Revelation 4, 5, and 7, stanza 1 expresses the triumph of Christ's "paschal victory"; stanza 2 speaks of Christ as “Judah's Lion,” who has “crushed the serpent's head”; stanza 3 is inspired by Colossians 1:15-18, and stanza 4 is a familiar Trinitarian doxology.

Liturgical Use:
Easter; Ascension; other occasions when a more elaborate musical setting would be helpful to ascribe glory to Jesus; the final stanza makes a fine doxology for any service.

==============================================
Chorus novae Hierusalem. St. Fulbert of Chartres. [Easter.] As St. Fulbert died cir. 1029, this hymn dates from about the beginning of the 11th century. It is found in an 11th century manuscript in the British Museum (Vesp. D. xii. f. 72 b), and from this is printed in the Latin Hymns of the Anglo-Saxon Church, 1851, p. 159. It is also in an 11th century manuscript at St. Gall (No. 387). Its English use was extensive. It is given in the Sarum Breviary as the hymn at first Vespers of the Octave of Easter, and so for all Sundays to the Feast of the Ascension (Hymnarium Sarisburiense, 1851, pp. 90, 91); in York, the same, with the addition, "When the Sunday Office is said"; in St. Alban's through Easter week at Terce. It is also in the Aberdeen Breviary.
The text is also in the following works: Daniel, i., No. 191, iv. p. 180, with various readings; Mone, No. 162; Card. Newman's Hymni Eccl., 1838 and 1865. Biggs's Annotated Hymns Ancient & Modern, 1867, p. 129, and others.
The second stanza, "Quo Christus invictus Leo" (in Hymns Ancient & Modern, "For Judah's Lion bursts His chains " is based upon a mediaeval belief, thus preserved in the words of Hugh of St. Victor, “Quum leaena parit, suos catulos mortuos parit, et ita custodit tribus diebus, donee veniens pater eorum exhalet ut vivificentur. Sic Omnipotens Pater Filium suum tertia die suscitavit a mortuis." [Rev. W. A. Shoults, B.D.]
Translations in common use:—
1. Ye choirs of New Jerusalem, Your sweetest notes employ. By R. Campbell, from the Sarum Breviary written for and first published in his Hymns and Anthems, &c. (St. Andrew's), 1850, pp. 75-6, in 6 stanzas of 4 lines. In 1858 it was included, with a slight alteration in stanza ii., 1. 3, and the omission of stanza vi. in the Scottish Episcopal Collection, No. 77. This was partly rewritten, and a doxology was added thereto by the compilers of Hymns Ancient & Modern, and given in their "trial copy," 1859, No. 78, and then in their 1st edition 1861. This is the form of the hymn which is in most extensive use. In Mr. Shipley's Annus Sanctus, Campbell's text is given from his manuscript.

LYNGHAM is a fuguing tune by Thomas Jarman (b. Clipston, Northamptonshire, England, 1776; d. Clipston, 1862), published in his Sacred Music (around 1803). Jarman was a tailor by vocation, but he much preferred his musical avocation. He composed many hymn tunes, which were published in seventeen coll…

All tunes published with 'Sing, Choirs of New Jerusalem'^ top 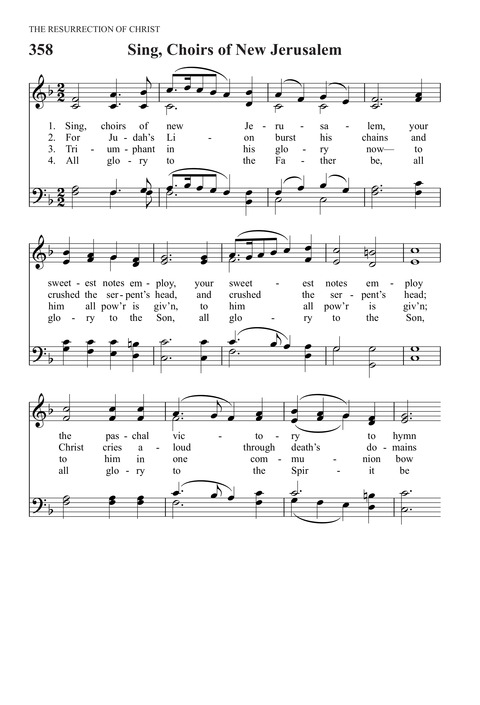