'Tis so sweet to trust in Jesus, And to take Him at His word

1 'Tis so sweet to trust in Jesus,
and to take him at his word;
just to rest upon his promise,
and to know, "Thus saith the Lord."


2 O how sweet to trust in Jesus,
just to trust his cleansing blood;
and in simple faith to plunge me
neath the healing, cleansing flood! [Refrain]


3 Yes, 'tis sweet to trust in Jesus,
just from sin and self to cease;
just from Jesus simply taking
life and rest, and joy and peace. [Refrain]

['Tis so sweet to trust in Jesus] (Kirkpatrick)

Jesus said “And you will hear of wars and rumors of wars. … and there will be famines and earthquakes in various places.” (Matthew 24:6,7 ESV) He also said “Peace I leave with you; my peace I give to you. Not as the world gives do I give to you. Let not your hearts be troubled, neither let them be afraid.” (John 14:27 ESV) In 1880, the husband of Louisa Stead, author of “’Tis So Sweet to Trust in Jesus” drowned. Two years later, this hymn was published. It is widely believed that she wrote this hymn in response to the peace she found in trusting Jesus despite her sorrow. Mrs. Stead went on to serve for many years as a missionary in Africa.

The accounts vary widely on the details and drama surrounding the writing of this hymn. What is known is that, in 1880, Louisa Stead’s husband drowned, and that this hymn was published in Songs of Triumph two years later.

The text of this hymn has remained quite consistent, with four stanzas and a refrain. The initial word of some lines of stanzas 1 and 2 is sometimes changed from the original “just” to “and.” The frequent repetition of the word “just” reinforces the simplicity of trusting in Jesus, but “and” relieves the redundancy and connects the lines better. Another minor change is a slight modernization of the language in the fourth verse – changing “thee” and “thou” to “you” or “Him.” The drawback of changing to “Him” is that, instead of praying the final stanza to Jesus, the object of our trust sung about in the first three stanzas, it is still addressed to fellow Christians.

This hymn is always sung to the tune TRUST IN JESUS, which was written for this text by William Kirkpatrick in 1882 and appeared in the first publication of this text (Songs of Triumph, 1882). The tune should be easily singable by a congregation. The range of the tune is within an octave, and the musical ideas are repetitive enough to aid memory, with enough variety to be interesting.

This hymn can fit any place in the liturgical year. Within a worship service, it would fit well as a hymn of response to a prayer of confession, or a testimony of God’s special care. In response to confession, the congregation could sing one or both of stanzas two and three a cappella or with minimal accompaniment to emphasize the sweetness of God’s forgiveness. 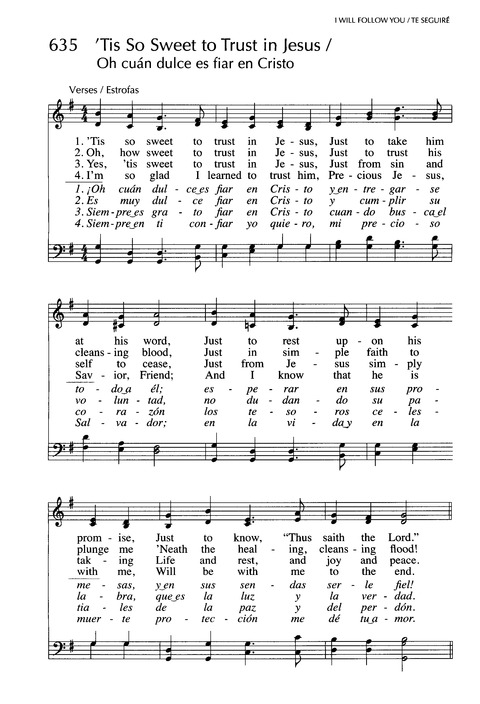 Hymns of the Christian Life #291

Display Title: Jesus, Jesus, how I trust him First Line: 'Tis so sweet to trust in Jesus, just to take him Author: Louisa M. R. Stead Date: 1992
Hymns of the Christian Life #291

Sacred Selections for the Church #559

The Hymnal for Worship and Celebration #350