My Hope is Built on Nothing Less

My hope is built on nothing less

1 My hope is built on nothing less
than Jesus' blood and righteousness;
I dare not trust the sweetest frame,
but wholly lean on Jesus' name.


2 When darkness veils his lovely face,
I rest on his unchanging grace;
in every high and stormy gale,
my anchor holds within the veil. [Refrain]


3 His oath, his covenant, his blood,
support me in the whelming flood;
when all around my soul gives way,
he then is all my hope and stay. [Refrain]


4 When he shall come with trumpet sound,
O may I then in him be found:
dressed in his righteousness alone,
faultless to stand before the throne. [Refrain] 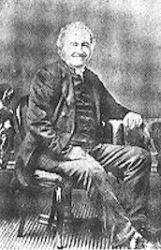 Mote, Edward, was born in Upper Thames Street, London, Jan. 21, 1797. Through the preaching of the Rev. J. Hyatt, of Tottenham Court Road Chapel, he underwent a great spiritual change; and ultimately he became a Baptist minister. For the last 26 years of his life he was pastor at Horsham, Sussex, where he died Nov. 13, 1874. Mr. Mote published several small pamphlets; and also:- Hymns of Praise. A New Selection of Gospel Hymns, combining all the Excellencies of our spiritual Poets, with many Originals. By E. Mote. London. J. Nichols, 1836. The Originals number nearly 100. Concerning the authorship of one of these original hymns much uncertainty has existed. The hymn is:— 1. Nor earth, nor hell my soul can move. [Jesus All in All.… Go to person page >
^ top

The Sunday school hymn writer William B. Bradbury (PHH 114) composed SOLID ROCK in 1863 for Edward Mote's "My Hope Is Built on Nothing Less." The tune name derives from that song's refrain: "On Christ, the solid rock, I stand. . . .” Bradbury published SOLID ROCK in his 1864 children's collection…

As Edward Mote was walking to work one day in 1834, the thought popped into his head to write a hymn on the “Gracious Experience of a Christian.” As he walked up the road, he had the chorus, “On Christ, the solid Rock, I stand; All other ground is sinking sand.” By the end of the day, he had the first four verses written out and safely tucked away in his pocket. Later that week, he visited his friend whose wife was very ill, and as they couldn’t find a hymnal to sing from, he dug up his newly written verses and sang those with the couple. The wife enjoyed them so much she asked for a copy, and Mote went home to finish the last two verses and sent it off to a publisher, saying, “As these verses so met the dying woman’s case, my attention to them was the more arrested, and I had a thousand printed for distribution” (Lutheran Hymnal Handbook). Almost two centuries later, we continue to sing these words of hope and assurance, our declaration that in the midst of all trials and storms, we will cling to the rock that is our Savior.

Mote’s original text consisted of six verses; today’s modern hymnals generally contain the first four verses (the new first verse is made from the first 2 lines of verse 2, and the last 2 lines of verse 1), and verse 6 with a modified first line, from “When I shall launch in worlds unseen” to “When he shall come with trumpet sound.”

The most commonly used tune is SOLID ROCK, composed by William B. Bradbury for Mote’s hymn text, and first published in 1864. One of the challenges of using this tune with a worship band and drummer is the ambiguity between the pick and the downbeat. This can be solved by setting the text to a different tune, such as the Getty tune “When Trials Come.” An arrangement of this tune with a brilliant fiddle turn-around, as arranged by Ben Dykstra at Calvin College in 2009 can be found on the Calvin Worship Symposium vimeo site, under Symposium 2011, Friday Morning Worship.

Celebration Hymnal #526 has a great arrangement for piano on the final verse, as well as an optional choral ending. There’s also a good piano arrangement in Hal H. Hopson’s The Creative Use of the Piano in Worship. In general, this is a piece that can be thickened up and played rather largely on the piano, so feel free to use octaves and fill in some of the pauses.

This is a hymn that works well in a number of spots during a service: it could be an opening song of praise, a response to the assurance of pardon after confessing our tendencies to rely on ourselves, or as a response to a sermon or Scripture reading about our need to trust in and rely on God. It can be beautifully paired with the Swahili Song, “Kwake Yesu Nasimama” (Here on Jesus Christ I will Stand), translated into English and then paraphrased by church musician, Greg Scheer. This is a fabulous global chorus of praise that is simple enough to learn, and follows the same Scriptural themes as “My Hope is Built.” 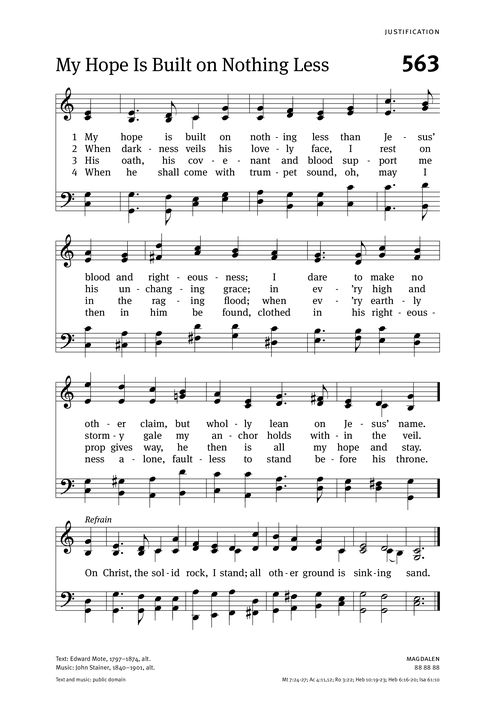 Great Songs of the Church (Revised) #558

Hymns for a Pilgrim People #355

Hymns for a Pilgrim People #356

Hymns of the Christian Life #306

Display Title: On Christ the solid rock I stand First Line: My hope is built on nothing less than Jesus' blood and righteousness Author: Edward Mote Date: 1992
Hymns of the Christian Life #306

Lift Every Voice and Sing II #99

Sacred Selections for the Church #120

The Hymnal for Worship and Celebration #402

The Hymnal for Worship and Celebration #404

The Song Book of the Salvation Army #745

Display Title: On Christ, the solid rock, I stand First Line: My hope is built on nothing less Author: Edward Mote (1797-1874) Date: 1986 Subject: The salvation soldier | Faith and trust
The Song Book of the Salvation Army #745