Blessed assurance, Jesus is mine!

1 Blessed assurance, Jesus is mine!
Oh, what a foretaste of glory divine!
Heir of salvation, purchase of God,
born of his Spirit, washed in his blood.


3 Perfect submission, all is at rest.
I in my Savior am happy and bless’d,
watching and waiting, looking above,
filled with his goodness, lost in his love. [Refrain]

This text and 'To God Be the Glory" (473) are probably the best known texts by Fanny J. Crosby (PHH 473). She said the following about her writing of the text:

Sometimes a tune is furnished me for which to write the words. The hymn titled "Blessed Assurance" was made in this manner. My dear friend Phoebe Palmer Knapp (Mrs. Joseph), so well-known as a writer and singer of most excellent music and as an aid and inspiration to all who knew her, had composed the tune; and it seemed to me one of the sweetest I had heard for a long time. She asked me what it said. I replied, "Blessed assurance." I felt while bringing the words and tones together that the air and the hymn were intended for each other
-from Fanny Crosby's Memories

Crosby's text and Knapp's tune were published in John R. Sweney's Gems of Praise in 1873. The hymn was also published in both the American and British editions of the Ira D. Sankey (PHH 73) hymnals and was more recently featured in Billy Graham Crusades. It is an immensely popular hymn in English-speaking Christendom. The Psalter Hymnal includes the original stanzas 1 and 3, but stanza 2 by Marie J. Post (PHH 5) is substituted for Crosby's "rapture" stanza.

Blessed Assurance" is a typical gospel hymn of the late nineteenth century. It is simple, truly evangelical in spirit, and has an emotional appeal that comes from its rousing tune and from the personal experience described in the text. It is a fine testimonial hymn of praise to Christ for his work of redemption (st. 1), for the Spirit's work of sanctification (st. 2), and for the joy of serving Jesus (st. 3).

Liturgical Use:
Many occasions in worship and in daily life.

The eight phrases of ASSURANCE use, with just one slight variation in the second phrase, the same rhythmic pattern throughout, sung over a static bass line. Sing in parts. Observe a moderate pace for the slow-moving harmony. ASSURANCE is one of the several tunes composed for Crosby’s text by Phoeb…

Ira Sankey, good friend of hymn author Fanny Crosby, once related this story about the comfort “Blessed Assurance” provides:
“’During the recent war in the Transvaal,’ said a gentleman at my meeting in Exeter Hall, London, in 1900, ‘when the soldiers going to the front were passing another company whom they recognized, their greetings used to be, “Four-nine-four, boys; four-nine-four;” and the salute would invariably be answered with “Six further on, boys; six further on.” The significance of this was that, in ‘Sacred Songs and Solos,’ a number of copies of the small edition of which had been sent to the front, number 494 was ‘God be with you till we meet again’; and six further on than 494, or number 500, was ‘Blessed Assurance, Jesus is mine’” (My Life and Sacred Songs, 69).

From the very day she wrote them, Crosby’s words have provided comfort for millions of Christians in the face of fear, persecution, sorrow, and doubt. In spite of all the trials that may come, we know that we serve a Savior who came to bring the Kingdom of God on earth, and as we serve Him, we participate in, and belong to, that Kingdom. We each play our own part in that “glorious foretaste” of what is still to come. We belong to Christ and his Kingdom – what an assurance this is!

For a hymn as well loved as this one, there is, oddly enough, some division about the text. Paul Westermeyer writes that “some sing it with fervor, while others are offended by what they perceive as smug and self-assured inwardness” (Let the People Sing, 306). I would argue the text speaks of comfort and hope, not smugness, and is a very fitting hymn in the face of trials.

It is more likely that Crosby is referring in this verse to her experiences within the Holiness Movement. This offshoot of nineteenth-century Methodism emphasized “Christian perfection,” and a defining characteristic of this tradition was the ultimate conversion experience or the “total submission” of one’s self in an ecstatic encounter with God.

However, there could be a third, very powerful meaning to the verse. Fanny Crosby was blind from a very young age. Thus, the line “visions of rapture now burst on my sight” speaks of things being right with the world. It is a testimony of faith in the New Heaven and New Earth where the deaf would hear and the blind receive sight. This is a stanza that reminds us that God is restoring this world and making all things new, and what a vision of beauty that will be.

The tune for this hymn, aptly entitled ASSURANCE, was actually written before the words. The tune is very simple to sing since if follows the same rhythmic pattern throughout, but be careful to establish the length of held notes after each phrase and keep that consistent throughout the hymn. It’s easy to hold the second dotted quarter in the first line twice as long as you should, and that will drastically alter the rhythm of the rest of the song.

For powerful harmonies, check out The Isaacs’ a cappella rendition. Avalon has a version of the song that’s big and upbeat and great for worship bands. Alan Jackson has a classic country rendition of the hymn.

This hymn can be sung throughout the liturgical year as a hymn of comfort and a declaration of faith in times of trial or struggle. It is a powerful hymn of assurance, or it could be sung as a response to a sermon about God’s providence and salvation of His people. It would also work as a closing hymn to end a service that moves from an acknowledgement of pain and struggle to an assurance of the hope we have in Christ.

Other music to consider: 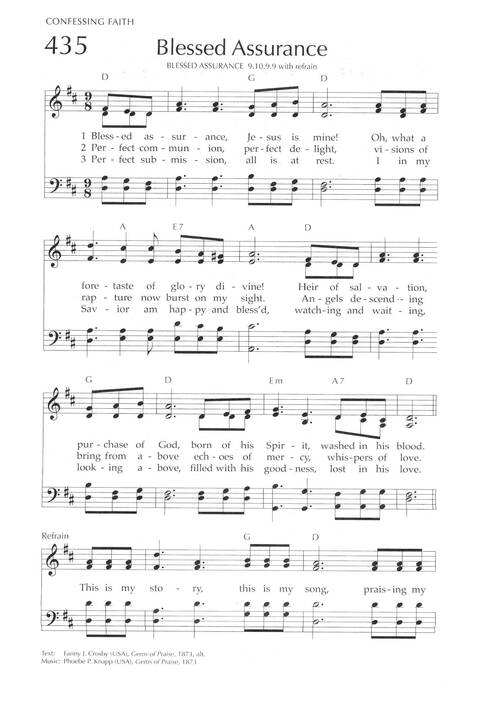 Great Songs of the Church (Revised) #345

Hymns for a Pilgrim People #359

Hymns of the Christian Life #299

Display Title: This is my story, this is my song First Line: Blessed assurance, Jesus is mine Author: Fanny J. Crosby Date: 1992
Hymns of the Christian Life #299

Sacred Selections for the Church #477

Display Title: This is my story, this is my song First Line: Blessed assurance, Jesus is mine Tune Title: ASSURANCE Author: Fanny Crosby Meter: 9.10.9.10. with refrain
Small Church Music #36

The Book of Hymns (A fresh anthology of favourite hymns) #32

The Hymnal for Worship and Celebration #345

The Song Book of the Salvation Army #310

Display Title: This is my story, this is my song First Line: Blessèd assurance, Jesus is mine Author: Fanny Crosby (1820-1915) Date: 1986 Subject: The gospel | Witness
The Song Book of the Salvation Army #310